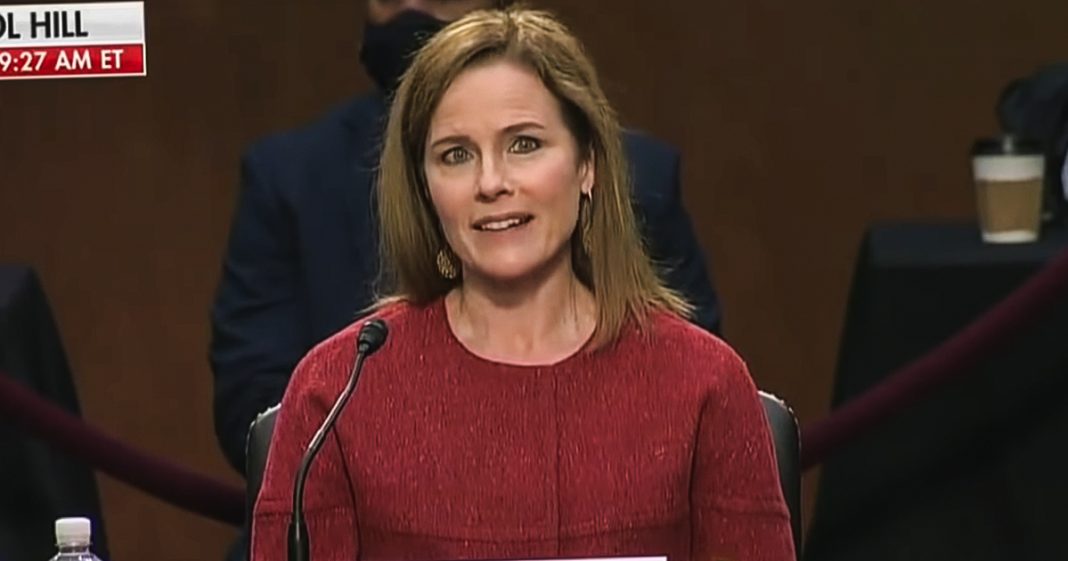 A majority of Americans are against the potential confirmation of Judge Amy Coney Barrett to the U.S. Supreme Court until AFTER the presidential election – or not at all if Trump loses. But Republicans are hellbent on shoving this nomination through, and the unhappiness of the public is something that Republicans are going to have to contend with in the polls. Ring of Fire’s Farron Cousins explains what’s happening.

The confirmation hearings of judge Amy Coney Barrett to the United States Supreme court began yesterday and the public is not happy about these hearings happening. According to the latest polls, 52% of Americans say that they do not support the filling of a delayed justice Ruth Bader Ginsburg seat until after the presidential election, 44% say, they’re okay with going forward with Trump’s conservative nominee. That’s an eight point gap. It’s pretty big gap. Right? Well, two weeks ago that gap was 20. It was a 20 point gap. So the gap has shrunk by eight points, or excuse me, by 12 points to eight points. That’s not good for Democrats. That’s, that’s very, very bad actually, because it shows that the public forgets the public moves on. And in the span of two weeks, the 12 point gap suggests 12% simply didn’t care anymore. After two weeks. Now I highlight that to bring up a point that I have been making relentlessly for years now. And that is the American public has the attention span.

Then it is roughly equivalent to the lifespan of a fruit fly. They’re constantly getting outraged and then distracted outraged and distracted, you know, Oh my God, I can’t believe this. The Holy crap. What is that thing over there? You see this. Wow. And the outrageous forgotten the anger of the moment is forgotten. A lot of people, uh, kinda gave me crap earlier this year when I talked about the impeachment thing and how Democrats rushed it, you know, you’re doing it in, in late January, early February. The public’s gonna forget about it by November. How many of you still think on a daily basis? Hey, wasn’t the president impeached? Nope. Nobody thinks about that. Everybody’s moved on from that outrage. Everybody’s moved on from the outrage that we learned about a year ago, which was, Oh my God. He was, he was trying to dig up dirt on Joe Biden.

He was extorting the Ukraine. Holy crap. That’s a big deal. Nope, everybody’s moved on. And it took two weeks for most of the public to move on from the outrage, the hypocrisy of Republicans of ramming through a Supreme court justice after they refuse to let Obama nominated justice, uh, his last year as president. So a lot of us really politically active people in this profession. You know, some of them like to talk about the fact that all the public’s pissed off, this is going to come back and bite the Republicans. This, this isn’t this really truly isn’t this I think has energized some of the progressives who said they weren’t going to vote for Biden. Maybe, maybe it got some of them, but this isn’t necessarily an issue that’s going to matter to middle America. I’m sorry, but it doesn’t it really honest to Cod doesn’t folks.

It sucks. The seed is gone. Amy Coney Barrett is going to get confirmed unless video emerges of her personally, performing an abortion Republicans are going to vote to confirm her that that’s that’s, that’s a given the Democrats do not have the tools to stop this. According to Democrats, two weeks ago to, they didn’t even really have the tools to delay it. They literally had come out and said, we could probably delay it for a couple hours, maybe a day or two, the hearings, but that’s it. And so yesterday I did see again, a bunch of Democrats saying, uh, or progressive saying like, Oh, I thought the Democrats said they could stall it. No, y’all, didn’t actually read beyond the headline. They literally said we could probably stall the hearings for a couple hours, maybe a day or two, that’s it. And then it would happen anyway. So no, the Democrats were powerless to stop this.

We are powerless to stop it. We have to watch it happen. And that’s not even the worst part. The worst part is as this poll shows, the American public moves on pretty quickly, because I can promise you people who work outside of the political arena, they don’t spend much time at all throughout their entire lives. Thinking about the Supreme court that may come as a shock to some people, but believe it or not, this isn’t something most people think about. It’s not actually something that influences their votes. I’m sorry to have to be the bearer of bad news, but that’s the reality in which we live. So what do we do then we fight back. Biden does have to pack the courts and that’s what Republicans have been doing. Let’s stop acting like, Oh my God, no, you can’t say that Republicans have been doing it for years.

That’s all Mitch McConnell’s been doing since Trump’s been president is packing the courts. There is no reason Biden. Shouldn’t do the same thing. Expand the court, put term limits up there. Let’s get the constitutional amendment process going to make that happen. Put a hundred seats on the Supreme court. I don’t care do whatever it takes to undo the damage they have done because we can’t stop the damage they’re doing right now. But if we get Trump out of office, if we get control of the Senate, we can undo the damage. But if we don’t do those two things, the damage they’re doing right now, the damage that’s happening during these hearings that becomes permanent.