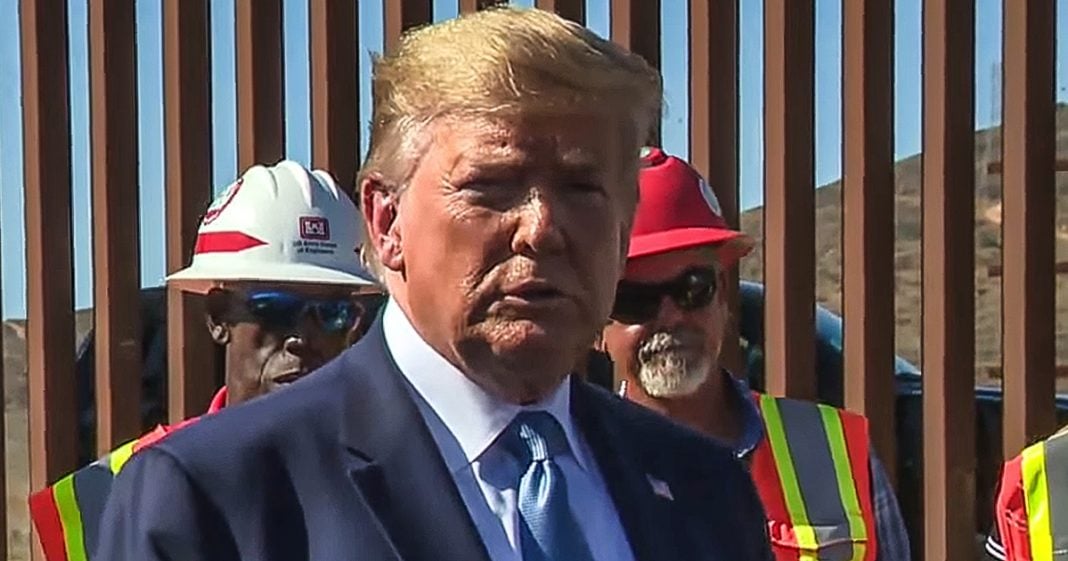 Late last week, the 9th Circuit Court of Appeals ruled that Donald Trump does not have the authority to re-appropriate money to pay for his border wall, thereby making the construction of the wall with this money illegal. The court has ordered the construction must immediately stop, presenting a huge barrier for Trump as he faces an already tough uphill battle for reelection. Ring of Fire’s Farron Cousins explains what’s happening.

Late last week, Donald Trump suffered a tremendous blow at the hands of the ninth circuit court of appeals. When the court ruled that his border wall, the parts of it that are being built right now with the money he, uh, appropriated from the U S military. Yeah, that’s totally illegal. According to the ninth circuit court of appeals and must immediately come to a stop. Now, this legal victory is the third and it’s the second by the ninth circuit court of appeals on this very issue, just to rewind a little bit, uh, back in, I think it was February of 2019, Donald Trump declared an international emergency at our Southern border, a national emergency. That, by the way, we haven’t heard anything else about, cause there was no real emergency. Um, but he doesn’t have to have justification. He can declare whatever he wants a national emergency. And he did that so that he could take money that had been appropriated for the U S military and apply it to this border wall, to the construction and funding of the border wall because Congress didn’t give him everything he wanted. Although to be fair, Congress had actually approved some money for him for the border wall. Nevertheless, he declared national emergency takes money from the military, puts it towards the border wall.

A lower court said you can’t do that. This wall is illegal. A ninth circuit then said, yeah, you can’t do that. This wall is illegal. Lower court then said, we’re going to stay the ruling. It’s still illegal, but you could still build it for now while you’re waiting appeals. Ninth circuit three days ago, came out and said, no, you cannot continue the construction. This is done. You’re done. This is illegal money. So the wall is there for illegal. You cannot continue building it. So again, this is a big defeat for Donald Trump, just a few weeks before the election, when his whole campaign is built around the fact that we’re going to build a wall, a wall that we really don’t hear that much about anymore. Do we, other than, you know, when we get the reports about parts of it falling down and parts of it being paid for, with scam money from Steve Bannon and that little group, but here’s the interesting part about this ruling from the court. We told you at the time when Donald Trump declared this order, that this was still an illegal action before any lawsuits had even been filed, we were telling you this was illegal. And I explained it as follows. When you declare a national emergency, it does free up certain funds for you to be able to use, to address the national emergency, whatever the national emergency is. But that does not just become your little fun money. There are still certain rules in

Place that happened to be followed for you to use that money. One of those is that you have to submit to Congress detail about what you’re using the money for and how that applies to this national emergency Congress then has the ability, the authority to actually reject that you also, if you’re using money from the military, the military itself has to be the one to do whatever it is you’re using the money for. So, because he took money from the military, he would have to have our us soldiers out there building the wall. None of these items actually happened. And that is why he does not have the authority to do this. He does have the authority to declare the national emergency. Absolutely. He could declare a national emergency if he went through McDonald’s drive through and only got nine nuggets instead of 10, That doesn’t mean that he gets to steal money from the military to go buy himself more chicken nuggets. But that’s exactly what he thought he could do with the border wall. Because one he’s either too stupid to know what the law is or two, he knows he just doesn’t care.