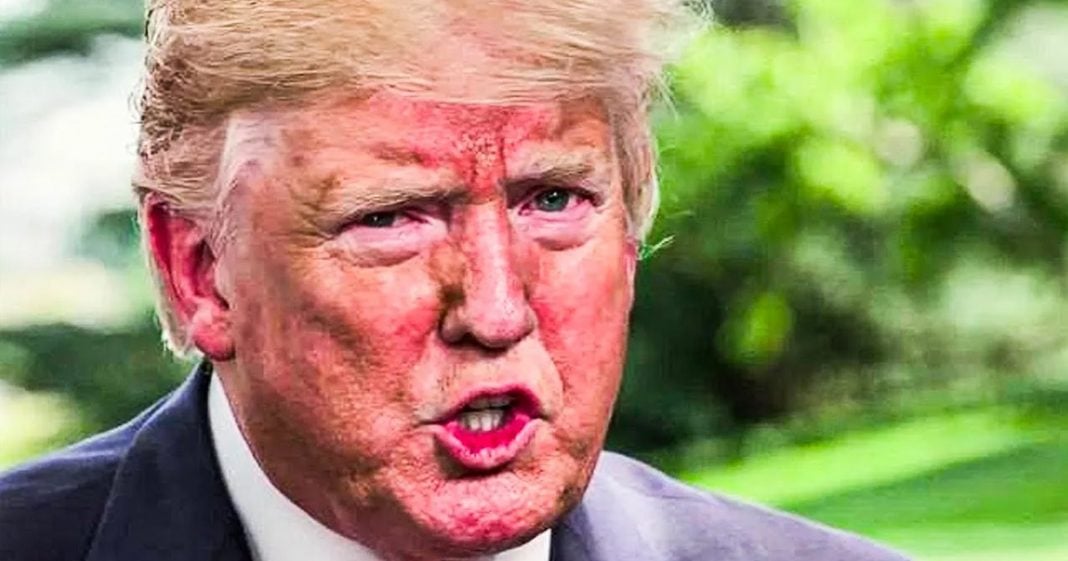 Trump has been given a huge gift, and he doesn’t even realize it. As much as Donald Trump loves to blame others for his own failures, his COVID diagnosis is the perfect scapegoat for him if he loses the election. He can claim that it prevented him from campaigning and therefore he had no way to win. He can say that the whole pandemic caused him to not be able to hold rallies. It really is the perfect excuse for a man who refuses to take the blame for anything, as Ring of Fire’s Farron Cousins explains.

You know, if there is any kind of silver lining to his illness that I don’t think Donald Trump has considered, let me go ahead and lay it out for him. It has given him the thing he loves most on the planet, not money, but a scapegoat. Think about it this way. Donald Trump loves to blame other people, other things for all of his failures, any time something goes wrong in that man’s life. It’s never because of what he did. It’s because of this person did that or this event happened, this that the other thing, whatever it is, it’s never because of something he did. And so his COVID-19 diagnosis, his illness is absolutely the perfect scapegoat that I promise you. He will be using if he loses the 20, 20 election to Joe Biden. And here’s what he’s going to do. In fact, this is actually not just about his personal struggle with COVID.

This is also about the pandemic in general, because of the pandemic. He will tell us because of his illness, he will say he was unable to hold rallies. He was unable to go out there and talk to people. You know, we basically, we tied his wrists. We shackled him. We put him in timeout, stuck him in his room to where he couldn’t get out. And so of course, obviously if you can’t actively go out and campaign, you’re not going to win an election, but, but dang it. He’s going to tell us he came close. Even without Kim campaigning. He, uh, he still did better than anybody else could have done without campaigning. You know, you take another person, tell them you’re not allowed to go out and talk to people. You can’t go out and hold a rally. You have to just sit there and be quiet.

You know, they would have done as good as I did. Yeah. That’s not true. Here’s the thing. Donald Trump’s looming loss, which may not even happen. You know, I do not by any stretch, want to count my chickens before they hatch here. Uh, he could still very well pull this off. I’m still not a hundred percent convinced. He’s not gonna, but I’m just using the hypothetical. If he loses, it’s not going to be because he got Coronavirus. You could probably blame part of it on the pandemic. Sure. Because the pandemic has highlighted his failures. You know, it’s not just the fact that a virus swept across the country and still continues to sweep across the country. Now, the problem is his reaction to the problem, his handling of the problem is the actual problem. Had he approached this with any semblance of leadership or knowledge or shown any indication that he was yielding to people with more knowledge, he could have shown a little bit of humility and a little bit of humanity for the people who died, but he didn’t do that.

He approached with bravado. He approached his own illness with bravado, stepping off that plane and ripping off his mask. And dude just saluting and then filming an ad right there. After he left the hospital, when he could barely breathe, he looked like a fricking goldfish gasping for air up there. And that’s what they think. Strength looks like. That’s what they think. Leadership looks like no leadership looks like going on national TV and telling people, Hey, I know it may be uncomfortable for you. Not really sure why, but okay. Uh, but wear a fucking mask, put something over your ugly fucking face. When you go out to the grocery store, stay home, order food from a local restaurant, we’ll send you stimulus checks to make sure you have money to spend and you can spend it at local businesses. So they don’t go under. That sounds like leadership.

He didn’t have to be profane with it, but if you would have taken a couple simple, easy steps, instead of going out there every day in April, doing these ridiculous press conferences where you lie to the public. If you’d have been honest with us and said, listen, folks, this thing’s, this is pretty rough. You don’t need to hoard toilet paper rough, but you do. If you’re going to leave your house, put on a mask, we’re going to send you stimulus checks. So don’t worry. Don’t try to rush out and say, I’ve got to go to work. Or my family is going to starve. We’re going to make sure that doesn’t happen. We are going to take care of you. You’re my babies. I love my babies. I’m going to take care of you. Don’t you worry, daddy got you. But instead he said, no, it was fun. It’s going to disappear in a couple days. Don’t worry about it. We’ll have full churches by Easter. As if that man has ever been in a church on Easter. He had the opportunity to be a leader. He chose to be a jackass instead, but in spite of all of that, in spite of all of his failures, if he loses to Joe Biden, you can bet that for the rest of his life, he’s going to blame it on the Coronavirus.