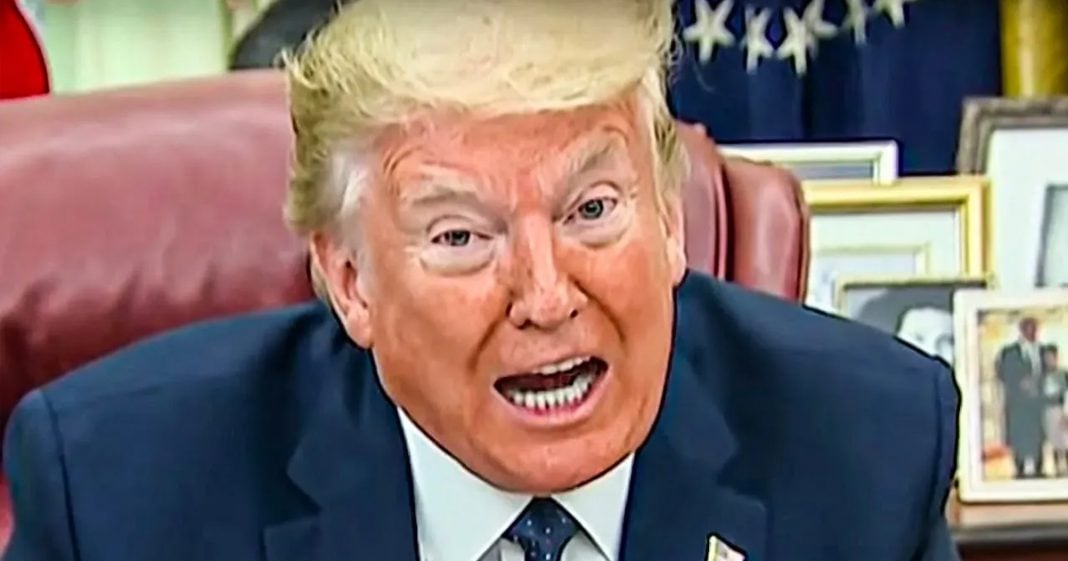 Donald Trump doesn’t seem to understand how doctor-patient confidentiality works, and reports this week indicate that he has made doctors at Walter Reed medical center sign non-disclosure agreements to prevent them from speaking about the President’s health. This automatically tells us that we are being lied to, and this one is a little more serious than the other instances of Trump forcing people to sign these agreements, because this one is a matter of national security and the health of the Executive. Ring of Fire’s Farron Cousins discusses this.

On Thursday evening, the white house, actually a Donald Trump’s dr. Conley released a memo that was sent to Kayleigh McEnany. That was then released to the general public here about how awesome Donald Trump is doing, like how great his health is. You have his heart rate was like 69 beats per minute. Um, you know, uh, blood pressure was like one 27 over some ridiculous number. That’s like super low. You’d only really see that number in like an athlete. The whole thing, like all of his stats were essentially those of like a 24 year old triathlete. And somehow this like 74 year old, uh, obese man who has never exercised a day in his life. Like somehow that dude has like the most amazing stats ever, even though he still has coronavirus inside of him. He’s still the healthiest human being that’s ever lived. Well, shortly before those stats were released by the white house, we also learned another thing according to a new report by NBC news.

And that other thing we learned was that starting back in 2019 and possibly including his recent trip to Walter Reed medical center, uh, Donald Trump forced all doctors and nonmedical staff alike who were working on him to sign nondisclosure agreements. And if they refused to sign these nondisclosure agreements, they were not allowed to work on the president. They were not allowed to see his charts. They were not allowed to know his records. They were told to leave. And that did happen to several doctors who refuse to sign the NDAs. Now, this was for Donald Trump’s mystery trip to Walter Reed medical center. Back in 2019, that has been confirmed. He made them sign nondisclosure agreements. And to this day, we still don’t know what happened, why he suddenly had to go to Walter Reed back in 2019. Uh, we do not know for certain, if this happened with his recent COVID-19 diagnosis, but if they’re doing it, if they’ve established that they can do this and doctors are willing to sign the agreements, we have no reason whatsoever to think that they didn’t make the doctors do this.

Now here’s the weird part about this. This is a bit of a redundancy. And after all the doctors are bound by HIPAA rules, they cannot just go out to the public and be like, Oh my God, y’all y’all wouldn’t believe how bad this dude is. Go around. I’m going to tell you all of his health problems that’s illegal. Um, you could be prosecuted for it. You could definitely would lose your medical license for it. You can’t do that. And so why the NDAs, the NDAs are redundant and the NDA can’t possibly punish a doctor more than what the actual HIPAA laws would punish them for. So you’re giving them an even lesser slap on the wrist after they would already be like prosecuted for it and lose their license and their livelihood. And you would already be able to Sue them. So the NDA. Yay.

The NDA had to be about something else. It wasn’t about punishment. It wasn’t about prevention. It was about fear. It was about control through fear. That is what that NDA was about. That is why he wanted these doctors to sign it. I guarantee you, I would guarantee you that he made the doctors at Walter Reed sign it. When he went in there last week, there is no way that after that last emergency trip, they wouldn’t have done the same thing. This administration has been lying to us since day one, about his health, you know, all the way back to dr. Ronnie Jackson, who came out and said, he’s the healthiest person I’ve ever seen. The idiot said that. And then he was no longer than doctor. And now we have these doctors here releasing these absolutely BS health statistics on the president. Like, I’m sorry. I am sorry. There is no possible way that this man that is a living embodiment of rage has a heart rate of 69 beats per minute and a blood pressure of a 24 year old triathlete. No, I guarantee you his heart rate and his blood pressure are worse than mine.

And I’m already at the, like, you need to calm the F down because bad things could happen to you level. There’s no way they’re lying to us. And they think that they can keep these doctors silent forever, but here’s the worst part about it. These doctors were already going to have to be silent about it forever. Not only are they bound by HIPAA laws, most of them are military. And they understand this is their commander in chief. Whether they like him or not is irrelevant at that point. That’s their commander in chief. They’re going to do what it takes. They’re going to make him happy. They’re going to do as he orders them to do their hands are tied. We’re probably never going to know the truth, at least not legally. And that’s sad because this is a national security issue. The health of the president is a national security issue. And as far as we can tell, if they’re telling us that everything is fine and dandy, obviously something bigger is happening.