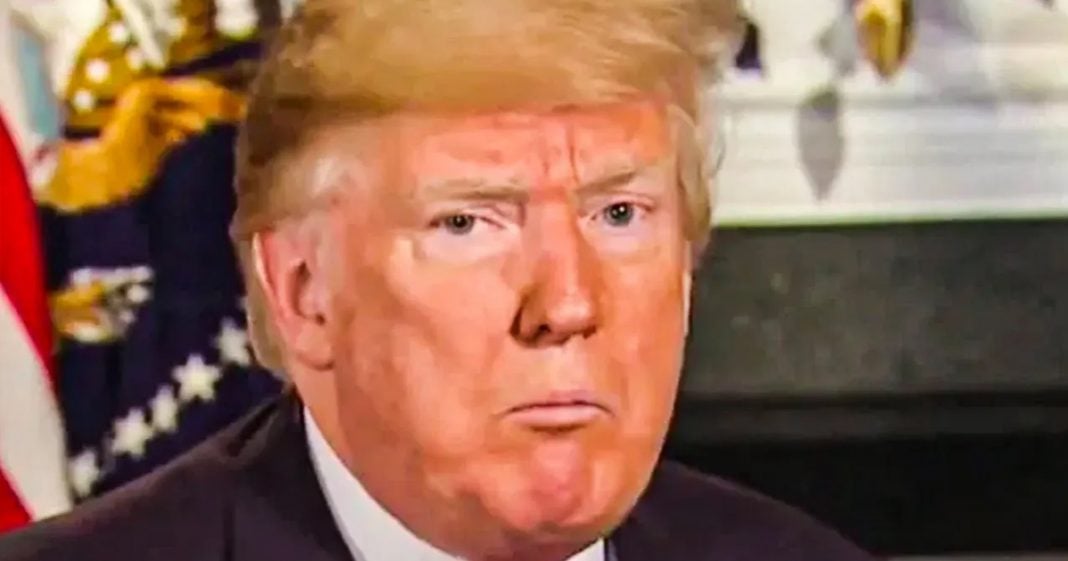 Donald Trump has repeatedly claimed during this campaign that he saved American jobs and prevented them from being sent overseas. But the truth is that he’s done nothing to save American jobs, and he’s still coddling the companies who send our jobs overseas. The Trump administration has handed out $425 BILLION in federal contracts to companies who are sending jobs overseas, according to a new analysis. Ring of Fire’s Farron Cousins discusses this.

Perhaps the greatest con that Donald Trump has pulled on the American public was his promise, his pledge that he was going to save American jobs. He was going to prevent your job from being shipped overseas or otherwise out of the country, South of the border, North of the border, whatever it was, your job, wasn’t going to leave the United States. And if the company you work for does send your job out of the United States. Trump told us they’re cut off from government contracts. They’re not going to get a dime from the federal government. We’re going to tax them. We’re going to tariff them. We’re going to basically drive them into the ground for screwing with your job. He told us that during the 2016 campaign, he has repeatedly told us that since taking the oath of office. And he has told us that in the debate, he told us that during the campaign, he says this at rallies, he says, he’s protecting our job, protecting our jobs and not allowing these corporations to have any benefits.

If they do ship our jobs overseas folks, none of it is true. Not a word of it. He hasn’t done a single thing. He hasn’t done anything to actually keep jobs in the United States. The few times he has attempted to do it. He has failed miserably and he continues to reward the biggest off shores in the United States, eight of the top 10 recipients of government contracts have been responsible for about 200,000 American jobs being shipped overseas, 200,000 jobs, and they represent eight out of the top 10 companies receiving contracts from the federal government, receiving our tax dollars to go work for the federal government, using their new offshore labor at grand total during the Trump administration of $425 billion has been awarded to companies that ship American jobs overseas. Now, does that sound like what would happen if this guy was keeping his promise? If he actually cared about American jobs?

No, he specifically said he wasn’t going to let that happen. He specifically told us if a company ships jobs overseas, they don’t get government contracts. And here he is awarding $425 billion in federal contracts to companies that ship 200,000 jobs over, she oversees 200,000, and those are jobs that are gone. And so this is a new study. This came out from public citizen this week and public citizen is by far one of the greatest organizations in this country, in terms of the research, the, the academic quality of their papers. They’re, they’re the best they are absolutely the best. Um, and then this needs to be the topic of the next debate.

If it ever happens, or this needs to be a talking point that a reporter to straight up ask Donald Trump, if they’re ever allowed to go near him again, this is something the public needs to be aware of because that’s the, the worst part of this story is that, okay, this is not going to be covered on corporate media because these corporations that are shipping jobs overseas are the same ones who pay the advertising bills for major media outlets. Cause the three top ones, Boeing general electric and United technologies go tuned to MSNBC, CNN, or Fox news for a full hour. Any one of them, you will see an ad for all three of these companies, all of them constantly on corporate media. So of course, they’re not going to be able to tell you this story. They’re literally being paid not to. And that benefits Trump, even the left wing media outlets like MSNBC, they’re not going to tell you what’s actually happening out there folks. That’s why somebody, somebody that has access to the president to ask him a question they have to know about this. They have to be able to ask the real questions. So that way the American public can finally understand fully what is going on and how badly they have been conned by Donald Trump.