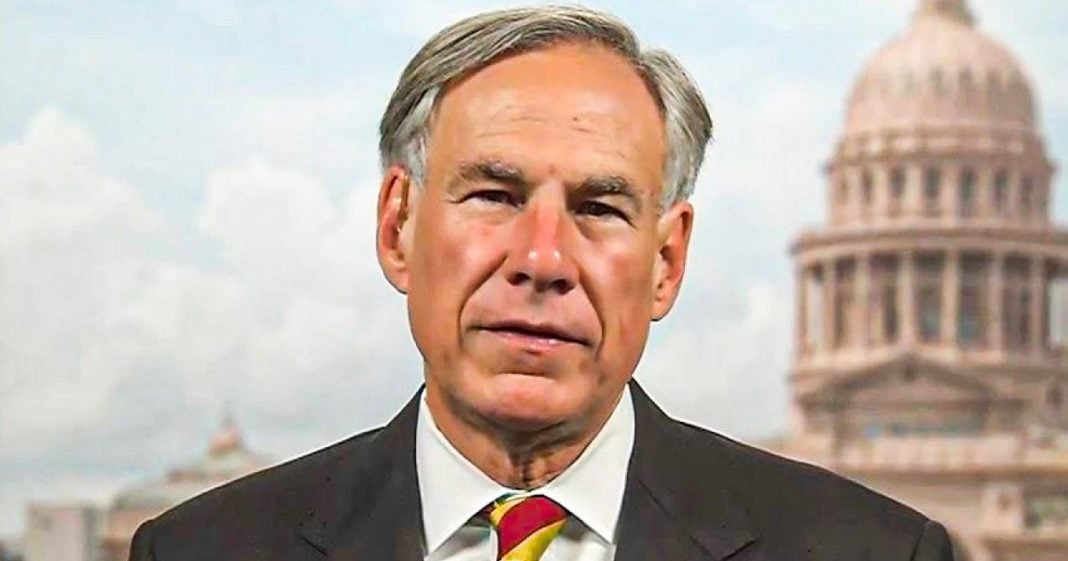 Republican Texas Governor Greg Abbott has now limited the number of ballot dropoff locations in the state of Texas to ONE per county in an effort to discourage more people from voting. The Republican Party is doing everything in their power to stop Americans from voting, and people need to wake up and realize that they are doing this because they FEAR you. Ring of Fire’s Farron Cousins explains what’s happening.

Late last week, Republican, Texas, governor Greg Abbott announced that he was going to do whatever possible to help suppress the vote, to make sure that Republicans continue winning in the state of Texas. Now, is that how he phrased it? Absolutely not Greg. Abbott’s not that stupid, but what he did was he announced that even though more and more people in Texas are voting absentee, uh, I’m going to shut down all, but one absentee ballot drop off ploy, a place in every single County in Texas. So a lot of the heavily populated areas had more ballot drop off areas. The heavily populated areas also happened to be the bluest parts of Texas. So this is mostly going to affect Democrats and in democratic areas of the state that now, instead of having a dozen half dozen, two dozen drop off points in their County, you’re down to one.

That’s all you get. You get one. And if you know, you’re a Democrat in a hugely gerrymandered district, like Dan Crenshaw calls that could literally mean having to get in your car and dry for about an hour to get all the way around his little crooked ass district that keeps him in power. When he clearly shouldn’t be the problem here is that not enough. Americans are pissed off. Look, we know, we know that Republican controlled States across the country are doing whatever they can to prevent you from voting. We know that the Trump campaign and the national Republican party are filing lawsuits to make it harder for you to vote right now, arguing in court, that you shouldn’t be able to take the easiest route to vote. They’re actively trying to prevent you from being able to say what you want to happen to this country, who you want to lead it, who you want to represent you. They don’t want you to have that voice and not enough. People are pissed off about that.

That’s what’s missing from this. The Republican efforts here are not new folks. They have been doing this for over 20 years. We have been covering it since the early days of ring of fire being in existence. And we’re going to obviously have to continue covering it because the Republicans are never going to stop. They’re never going to stop until they are out of power and they physically are unable to do these things. But the only way for that to happen is for you to get pissed off for you to understand the power of your vote. If there was no power behind it, they wouldn’t be trying to steal it. They wouldn’t be trying to suppress it. They wouldn’t be trying to defeat it, but they understand how powerful your voice is, how powerful your choice is and how dangerous your choice is when compiled with everybody else’s to their power, because their power is imaginary.

Yours is not fight for it. Get pissed off, do not let them win. If they make it harder to vote this year, that sucks, but we gotta make sure we still fight back against it. And if they want us to climb a hundred miles uphill to vote, we’re going to climb that a hundred miles with a smile on our face. We’re going to spit on them. When we get to the top, I don’t know if we’re allowed to spit on them. So probably don’t do that part, but whatever hurdles they put in front of us, let’s beat them. If they say they’re going to cut down on the number of polling places, volunteer to help drive people to polling places. If they say you got to have a photo ID, do what you can do to help people get their photo ID. There are organizations out there that are helping this a quick Google search. You’ll be able to find them, give what you can, if it’s time, give your time. If it’s money, give your money, but you have too much power to let these jackasses in the Republican party, try to strip you of it, strip it from them instead.