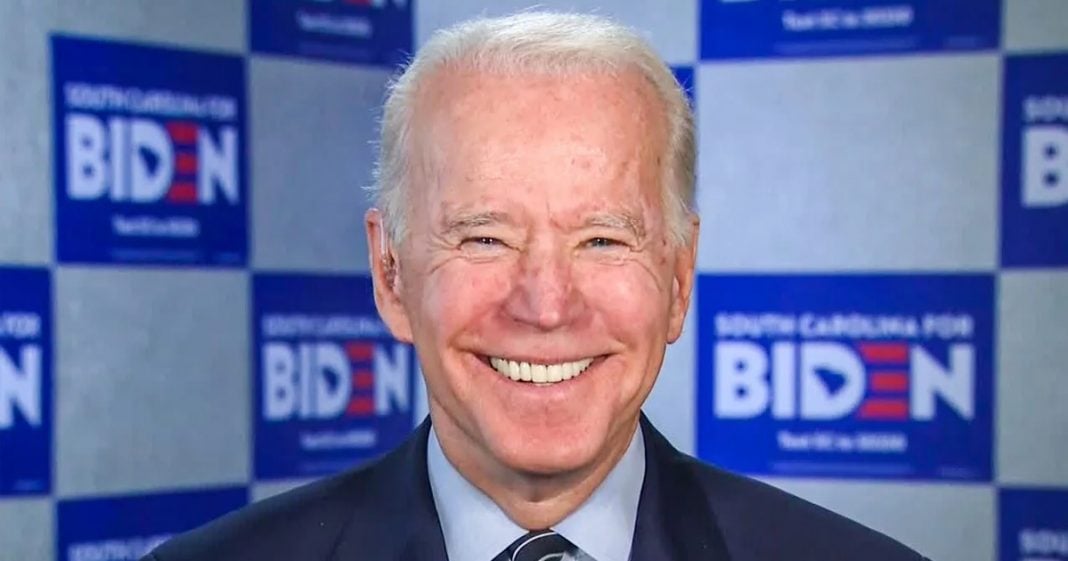 Joe Biden now has a commanding lead over Donald Trump with less a month to go before the election, and Republicans are freaking out. But they aren’t anxious at the thought of Trump being out of power, they are terrified about the prospect of losing the Senate. That has always been their long game, and they know that a Democratic-controlled Senate would spell doom for their plans for the next few years. Ring of Fire’s Farron Cousins discusses this.

According to a report in the Hill this week, Republicans are freaking out about Joe Biden’s massive commanding lead in the polls right now. And they should be because after all the polls that have come out this week, the first one came out on Sunday. The, uh, NBC news wall street journal poll had Biden up by 14 CNN poll. Two days later had him up by 16, a Boston Herald polled out the next day, had him up by 21, Joe Biden. Uh, when you take the polling averages has a commanding double digit lead over Donald Trump, but that’s not, what’s freaking out Republicans. They understand Trump’s toast, but they also understand that if the election is close, you know, if, if Biden only wins by one or two points, that means that they have a good chance of retaining the Senate. But if it’s a commanding lead, I mean, if you have five to 10 million, more people showing up to vote for Biden than they do for Trump

Likely means that control of that Senate is going to swing back the other way. It certainly means, uh, the house is staying with the Democrats. And I think at this point, that is definitely a given house. Isn’t going anywhere presidency at this moment, you know, barring anything crazy happening. And Trump is trying to make crazy things happen, but none of it is sticking. Um, Biden’s got it in the bag at the moment. Bag could change bag, fall, open Biden could do something stupid. Trump could do something great. Who knows, but we have to understand those are possibilities as small as they may be. They still exist. So that’s what we’re looking at right now. But with the Senate, that’s up for grabs. Republicans could easily retain it. Republicans could easily lose it. They know for a fact, they’re getting Doug Jones seat back. That seat is going to be occupied by crazy person, Tommy Tuberville, uh, who has a 12 point lead based on the polls. I looked at a Tuesday of this week, 12 point lead over Doug Jones. Tocqueville’s never been in politics ever has quit. Every coaching job he’s ever had, but Alabama refuses to vote for a Democrat. So Doug Jones is going to lose. We knew it was going to happen, but then there’s other Republicans there. Susan Collins is Martha McSally.

Uh, they’re not looking good. Other Republicans and you know, tough areas, swing areas, not looking good. So even with the Democrats knowingly losing Doug Jones, there are still enough embattled Republicans in swing States that the Democrats can easily pick up control the Senate. It’s not going to be a commanding lead, but a one seed lead is still a lead silver majority. And that’s what Democrats are looking at at this point. And that is why these polling numbers are freaking out the Republicans because they know that Trump’s not sticking around. And even if he does stick around, it’s only four more years. What they aren’t sure of is if they can retain the Senate, because if you do not have the white house, you do not have the house. And then you also lose the Senate. You lose all your power, all your effectiveness for two years. Now, the flip side, historically speaking is you only lose it for two years only.

Uh, next Senate election, uh, should be more Democrats up for reelection than Republican [inaudible]. Um, or even if it’s the one where it’s the even number, roughly, uh, Democrats wind up losing seats. If they had power in all three chambers, you, you typically, you do not see anybody go from having all the power after a power shift to keeping it like that. It just simply doesn’t typically happen in that manner. So yeah, Republicans would be losing the control of the Senate likely for two years house, uh, who knows what could happen with that. But either way, Republicans don’t want to lose two years. Cause in two years, a democratic controlled Senate democratic controlled house and a democratic controlled white house could absolutely undo all of the damage Republicans have done over the last four years. The only question is whether or not the Democrats will have the fortitude to actually do that. If they get this referendum from the American voters and the voters keep pushing them to do that, wow, we might actually see some good government and Hey, if they make enough people happy, maybe it won’t just be a two year power shift. That’d be something Democrats need to consider when they decide what to do or what not to do. If they pick up that Senate.