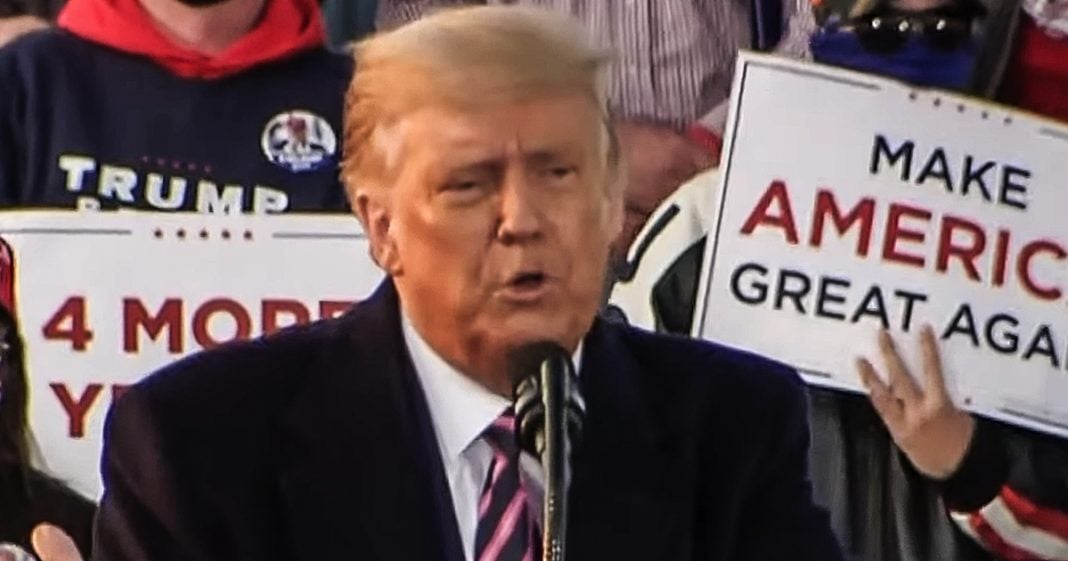 Donald Trump may have a little sadist in him, if Yale psychiatrist Dr. Bandy X. Lee is correct with her pathology. In a recent interview, Dr. Lee said it was clear that Trump enjoyed putting other people in danger, and that this was a trait of his sociopath tendencies. And if you look at his behavior, there is no question that Trump puts people in danger all the time. Ring of Fire’s Farron Cousins discusses this.

According to a recent interview with Yale forensic psychiatrist, dr. Bandy Lee, uh, with salon.com. It is quite possible that as part of his mental pathology, Donald Trump actually delights in putting other human beings in harm’s way to put it in another way. Trump may be a bit of a sadist. You may kind of get off a little bit, not sexually, of course, but, uh, may find enjoyment and actually harming, or at least the thought of harming other people. Certainly not a trait you ever want to see in the president of the United States, but it is what it is. Dr. Bandy Lee is absolutely a professional in this is great at what she does. Somebody we probably need to take very seriously here. And if we just look at the evidence available to us, it’s pretty obvious that what she’s saying is correct. I, the fact that he went up there on that balcony after leaving the hospital for COVID-19 treatment, telling people, Hey, don’t let fear rule your life to sing.

Ain’t that bad? Yeah. We don’t all have access to our own private helicopters, a 24 hour medical staff, uh, you know, massive suite in a hospital. That’s better than most five star hotels and all of the best experimental treatments that the country’s money can buy. We don’t have that. We don’t, we’re left with underfunded, hospitals that care more about whether or not you’re going to be able to pay your bill than whether or not they’re going to be able to fix you. That’s the healthcare system we deal with. So we do have to worry about this thing and you still do too, by the way.

They prove their loyalty to him with their lives. This is why I once compared his commands to those, uh, made to gang members and child soldiers. The circumstances are different, but the psychology is the same. So she mentions his supporters there a little bit. Cause obviously he can’t put people in harm’s way. If there aren’t the people who are in some instances willing to be put in harm’s way, like going to these maskers masculine rallies, uh, sitting out there massless in the Rose garden for the Amy Coney Barrett nomination. So she also goes on to explain later on the pathology of these followers, what people need to understand about many of his followers is that in their need for a parental figure, who will take care of them, his position alone, justifies whatever he does. And any exposure of his fraudulence and criminality will be experienced as an exit’s existential threat to them, which is why it only activates defensive denial disavowal and protection of their protector.

That speaks volumes. And there’s more, I mean, you get to in a minute, but that speaks volumes and explains perfectly everything we have seen from these rabid Trump supporters. He can do no wrong because he is their protector. So they protect him so he can keep protecting them, even though he’s not ever actually protected them. And they’re just living in denial because they’ve been conned violence, paranoia and delusions are also particularly contagious. And so having someone with these symptoms in an influential position is almost a setup for propagation of these traits. What I have been calling shared psychosis, but which others have also called a fully, a millions or madness by the millions, this contagion of symptoms dissipates when exposure to the primary person is reduced. We already saw this happen when he was temporarily unable to hold rallies at the onset of the pandemic. So folks, she lays it out right there. You get rid of the source and the shared psychosis starts to go away. And I’m not just saying voting Donald Trump out, I’m saying turn off the Fox news because they were creating a shared psychosis among the Republican party long before Donald Trump ever decided to run for politics. And in fact, that is where he got his start as well. Trump is not the sole source of the shared psychosis. Conservative media has been doing a great job since long before Trump came along.