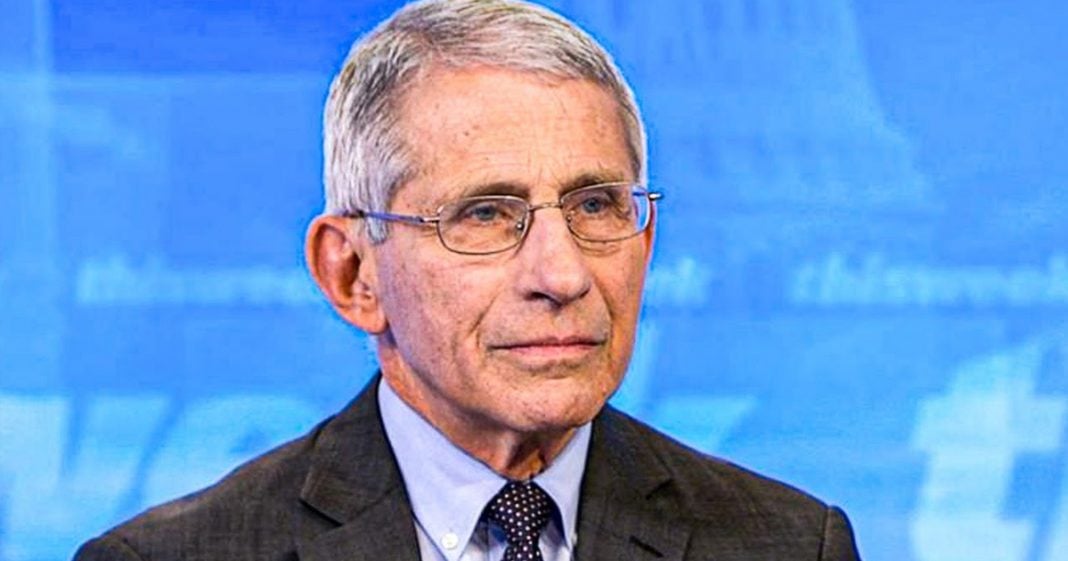 Dr. Anthony Fauci is still sounding the alarm bells over the pandemic, and at this point he’s the only one in this administration willing to do that. Fauci warned last week that if no actions are taken, we could easily be looking at a death toll surpassing 400,000 from COVID-19 during the winter months. And the sad reality is that we know for a fact this administration won’t take any action, especially if they lose the election. Ring of Fire’s Farron Cousins discusses this.

Late last week, dr. Anthony Fauci warned that if we continue to do nothing about the ongoing pandemic, then through the winter, we could be looking at a death toll of 400,000 total Americans from this pandemic that is on top of the over 200,000 that we already have. So he’s saying over the winter months, we could add an additional, roughly 200,000 dead to the overall total here. What’s really scary about that. Uh, we repeatedly heard both Donald Trump and his debate, Donald Trump in his ads that he’s producing from the white house lawn and Mike Pence, the vice presidential debate that we were going to have a vaccine by the end of the year. Folks y’all remember that, right? I’m not the only one that heard that. They said we would likely have a vaccine by the end of the year. And here we have, Fauci saying, Hey, uh, we’re probably gonna have 200,000 deaths over the winter months. So who do we believe? The people that say, don’t worry, the vaccines right around the corner or the guy who hasn’t been lying to us every single day, since the pandemic began, I’m going to go with Fauci.

Yeah, it fell. She’s told a couple of lies, but he later admitted to them and explained why he did it because he didn’t want the PPE to be sucked up by crazy hoarders. And he wanted it to be available for hospitals and doctors, people who needed it to treat people that was his lie. That’s why he told us back then not to do it. Nevertheless, his whole thing hinges on. If nothing is done, this is the death toll we’re going to be looking at. Nothing’s going to be done. We know for a fact, Donald, Trump’s not going to do anything because even after he caught it, what did he do? He left the hospital and he said, don’t worry about this thing. It’s not that big a deal. You know, we don’t all have socialized medicine to protect us and keep us alive. Or a team of doctors working around the clock or, you know, private helicopter rides to the hospital. But he told us, don’t worry about it. We’re going to be okay. He downplayed it. He told people, don’t let it ruin your lives.

Don’t let it control your lives. That is going to lead to more infections because people think, Oh, well, he got over it. I can too. You don’t have the same kind of care he has. Plus we don’t even know if he’s out of the woods yet. It kind of maybe want to wait and see about that either way. He’s not going to do anything, but, but in researching for this story, scary thought popped into my head. Think about this. Think about the scenario of Donald Trump, losing the election. That is a very likely, the most likely at this point scenario to play itself out. So he loses.

This is the election, November 3rd. He knows he’s a lame duck. He’s angry at the public. He’s bitter. He’s mad that he lost and the death toll start to go up. Do you think at that point that this man is going to do anything to help us know if anything, he’s going to do the opposite. That’s what I predict will happen. He will intentionally. And this is as dr. Bandy Lee from the Yale forensic psychiatrist pointed out, the man seems to delight in hurting people. So if we hurt his feelings by not reelecting him, I guarantee you, he is going to become vengeful and angry. And his policies with regards to the pandemic are going to reflect that. I think Fauci is undercutting it here. I think Trump’s anger. And his wrath is going to push that death toll way, way above 400,000 people. And that’s a terrifying thought, but he is already doing everything he can to make sure that death toll goes higher by downplaying the severity of it. And just imagine what he’s going to do. If he’s pissed off at the entire country for voting for Joe Biden.