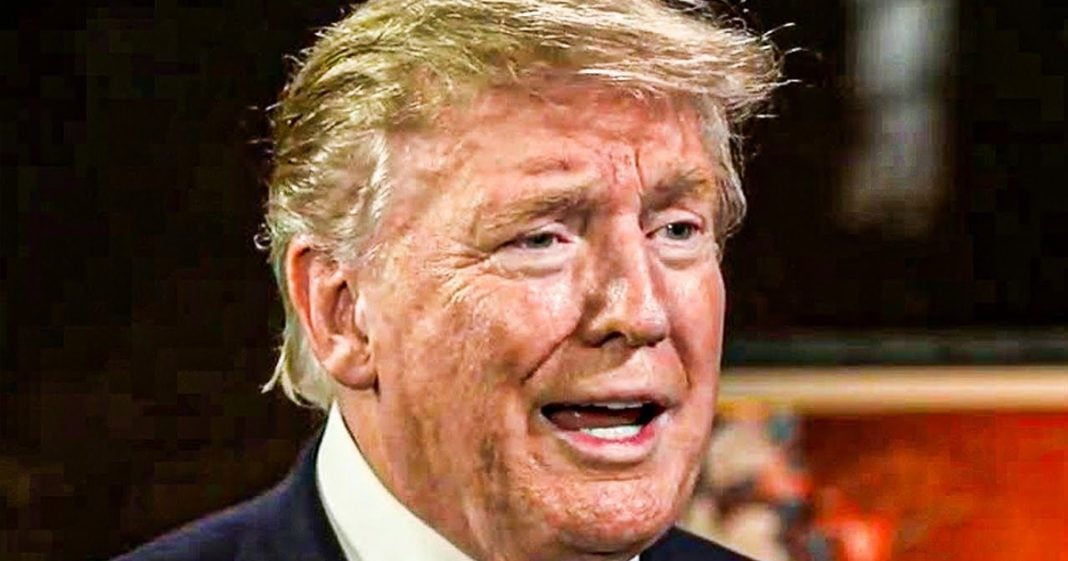 A desperate Trump is a dangerous Trump, and we are witnessing the worst version of this man imaginable. He has absolutely lost his grip on reality, and he didn’t have that strong of a grip to begin with. The man has become increasingly unhinged and dangerous, and it is way past time to start talking about the 25th Amendment. Ring of Fire’s Farron Cousins discusses this.

Late last week, Nancy Pelosi said that we absolutely have got to be talking about the 25th amendment. She’s 100% correct folks. I don’t know if you have been paying very close attention. Uh, I’m assuming if you’re here, you have been, but watching what has happened with Donald Trump just in the, in the week, actually now, since he got back from the hospital, we are watching in real time, this man’s final descent into pure madness, madness. That’s what’s happening. He is putting out those bizarre videos from the white house lawn. You know, he put out once a day. I love seniors. You’re my favorite people that may not know this I’m a senior citizen. It was weird. It was creepy. It was incoherent. Then of course, he, he called for Joe Biden to be indicted by bill BARR. That’s that’s crazy. That’s crazy. And then you have his angry, all caps, tweets that do not make any sense. They reek of desperation. The man is a paranoid delusional.

And this week we can’t just sit by and let this go folks, as I’ve said, plenty times in the past week, like, I feel like I’m the crazy one here, because, cause I it’s just what you get off of it. I mean, it’s hard to even describe like why is everybody else not as furious or angry or concerned about this as I am. And the only conclusion I can come to is that maybe I’m the crazy one instead, but I know I’m not, or at least I’m still saying enough to know what’s happening, but we cannot just sit here and watch this man’s descent into madness. First and foremost, he’s in a dangerous position. As the president of the United States, he has more power than anybody else in this country.

And he is becoming increasingly unhinged and he is trying to use the power that he has. Like I said, with bill BARR, trying to get him to indict Joe Biden, you know, continuously saying he may stay in office even after, even after his term’s up. Those are things that at this point we have to take seriously. He is becoming more desperate. The more desperate he gets, the more dangerous he gets and the more dangerous he gets, the more likely he is to do something that could permanently damage aspects of this country. We have the 25th amendment for a reason. You know, part of it, part of the language in there was crafted specifically for people like Donald Trump. Maybe it’s the steroids. Maybe it is the dexamethazone the corticosteroid that’s making him go a little nuts. It does that to people. But I think what it is is that he is a rat.

He is cornered. He believed he had free reign over everything and it turns out it’s all been an illusion and that illusion is crashing down around him. And as his illusion that he created for himself, you know, that alternate reality that we have been talking about that he’s living in for four years now, as he sees it crumbling, he is trying desperately to rebuild it before it falls apart around him, dim, but in doing so I think a lot of people, well, who weren’t convinced yet that this man has lost his marbles. I think they’re starting to look at it and say, Oh my God, the emperor has no clothes.