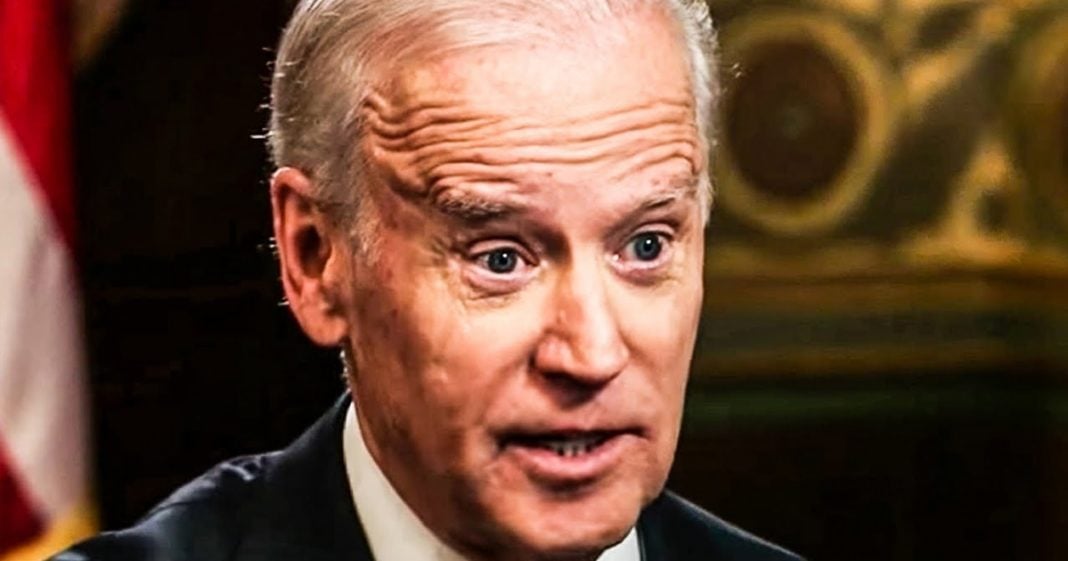 It is starting to look more and more like Joe Biden has this election on lockdown. And assuming nothing changes, the Democratic Party needs to be aware that a Biden victory is not a testament to the strength of Centrism, but rather it is a referendum against Trump and his fascist ways. The Party has got to understand that the public wants big, bold policies and action, not weak-kneed centrism. Ring of Fire’s Farron Cousins discusses this.

I have one great fear with the 2020 presidential election. Uh, let me rephrase that. I have one great fear of the 2020 presidential election if Joe Biden wins. And that fear is that the democratic establishment will learn the wrong lessons. And to be honest, I think that is less of a fear and more of a, we know what’s coming from these people. And that’s what really, really sucks about this year’s presidential election. You know, Joe Biden right now is absolutely crushing it. He is killing it in the polls. You know, if the election were held today, this would be the biggest landslide of an election we have seen in our lifetimes. That’s a given, but none of it, none of it is because of who Joe Biden is or what he wants to do for this country. The support Joe Biden has right now, the support the democratic party has right now, for the most part, isn’t coming out of love and admiration and respect for the Democrats.

It is coming out of hatred and fear of what’s on the other side. And I hope the democratic party remembers that and that they don’t come out of this election and say, see, all you Bernie bros thought we could only win going further to the left. We won with a centrist. We won with a corporatist Mark. My words right now, Monday, October 12th, Mark those words, because we’re going to see people say that we are going to see people make that claim. And I want you to send this video to them when you, when you see that you can go out and tag me on that as well, because it’s going to happen. I’m predicting. I am telling you right now that is going to happen. They’re going to learn the wrong lessons folks. And that’s, what’s so sad about this.

If we had put up a true progressive champion as our democratic nominee, there wouldn’t be a 14 point gap between the candidates right now, there’d be a 30 point gap between the candidates. It’d be a 35 point gap in some areas because the policies that were being pushed by Bernie Sanders were hugely popular, not just with Democrats and independents, but even with Republicans, Medicare for all had across the board, positive approval ratings among every party, even Republicans wanted it, they liked it. And yet we have a candidate who is actively running away from that, making sure we know what every step of the way, Hey, he’s not going to give us that environmental action action on climate change action to protect the environment. Even if it costs us a little money, even Republicans, just like Medicare, for all support doing that. They support bold action on climate change. Now Biden has a great climate plan. That’s the really, really best thing that he has. So that’s a good one. Bernie’s was a little bit more aggressive. Bernie would ban fracking. And as we have heard relentlessly for the last week, Oh my God, don’t ever accuse Joe Biden of wanting to ban fracking. Bernie would have the public would have been okay with it.

Our job over the next four years, assuming Joe Biden wins is to push to the left, to push to the left while also trying to bolster independent third party voices. By the way, the democratic party does not work as it should. The Republican party hasn’t worked as it should for a long time. The Democrats it’s been a pretty long time as well. And it’s time we face that reality. It’s our best choice right now, uh, to kind of save what’s left of our government. Yeah, we need the vote Democrat this time. I am, I’m going to vote for Joe Biden. I’m going to be happy about doing it. And then immediately after I cast that vote immediately after we know who the next president’s going to be, I’m going to fight like hell. And I’m going to call him out every time he goes with a corporation, instead of what the people I’m going to call them out.

Every time he works with Republicans, instead of working with Progressive’s, I’m going to call out the democratic party. Every time they take money from a fossil fuel company or a big pharma company or an insurer or a hospital corporation or a big bank, whatever it is, I’m going to call them out every step of the way, just like we always have, and I’m going to push them left. And I’m going to hope that the party gets better, but we need to have a plan B in case they don’t, we do need to lift up independent parties. We need a multiparty system because the two party system isn’t working. And I don’t think the democratic party is going to learn the right lessons of 2020. They’re going to think that putting up a centrist and winning a centrism was the message. No, the message. The public is sending is not. We love Joe Biden. It’s we just hate Trump.