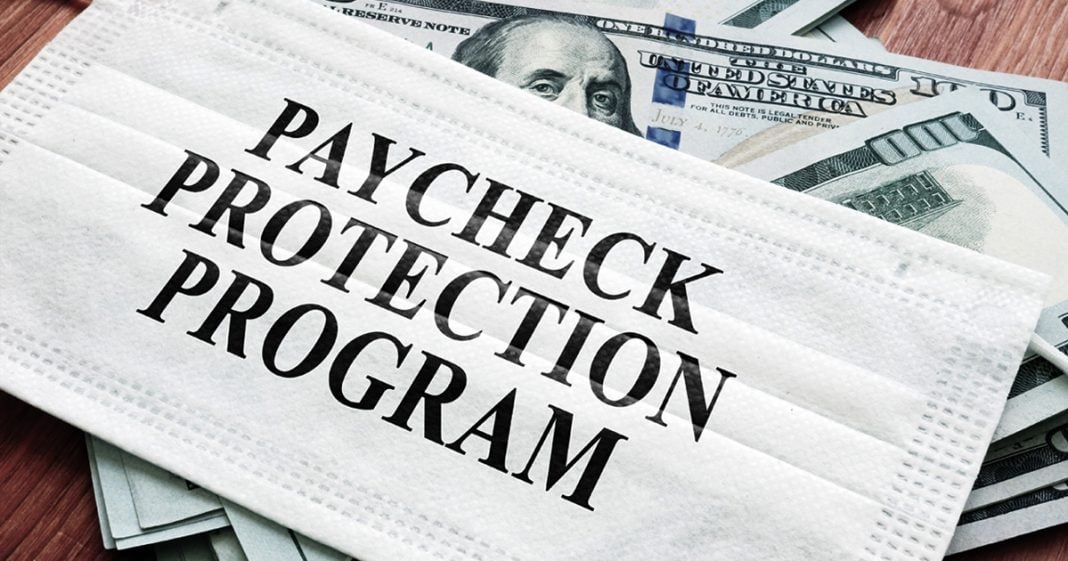 According to new reports, several companies who have been fined millions of dollars for pollution violations also received PPP loans from the government for roughly the same amount that their fines cost, effectively transferring their fines to the American taxpayers. This story is gross on its face, but most Americans don’t understand the dirty backstory that makes it even more disgusting. Ring of Fire’s Farron Cousins explains.

As it stands right now, about 60% of American households are struggling to pay their bills in the middle of this pandemic and economic downturn and yeah, countries creating hundreds of thousands of jobs, each weak, but that’s okay is not make up for the tens of millions that were lost during the pandemic. We’re not recovering them as quickly as we lost them. And that is prolonging the economic hardship here in this country. Congress has stalled on getting us any relief, any more stimulus checks for struggling Americans, other the houses don’t find even Steven Mnuchin has been all in favor of it. It’s the Republican controlled Senate. That’s preventing us from getting any relief here, but they are making sure that greedy corporate pigs can still come feed off the government’s trough. Sure. The rest of us might be starving, but those corporate pigs are getting fatter than ever.

And here is a new story about just how lopsided these PPP, the paycheck protection program loans have been for big multinational corporations who managed to take advantage of it by finding all the loopholes and exploiting them according to a new report by accountable dot U S and the Huffington post oil companies, several different oil companies who together have been fined roughly $52 million for environmental violations, reaped in a combined $32 million in those PPP loans. And that’s $32 million, by the way, then most likely will not ever have to be paid back as long as they can prove that they used it to cover expenses, cover payroll, things like that. As long as you do that, you don’t have to pay it back. And if you do have to pay it back, you’re probably going to pay it back at one or 2%. So you make a profit off it.

So Hey, it’s free money. And it almost completely makes up for all the money you’ve had to pay in fines for intentionally destroying the environment. And if it’s not intentionally destroying it, then it’s negligently destroying it. But either way you paid 52 in fines, you got 32 back from the government. It’s pretty sweet deal, right? That’s just the story that was reported. I’m gonna take that story a little bit further in a direction that I, that should have gone, but didn’t most of the time when a corporation gets fined by the federal government, whether it’s a big bank, who’s run a foul of the sec or they’ve committed some kind of fraud, whether it’s an oil company with their environmental damage or their labor violations, whatever it is, major corporations typically do not end up paying 100% of the fines that are levied. So that 52 million that they were fined, there is no chance in hell that they actually paid a total of 52,000,052 million is what it says on paper, but more than likely, they only had to pay 75 million of it, 75% of it, which would have been if we’re doing the super quick math on it, we’re probably talking about maybe 35% or 35 million is what they likely paid.

So the 32 million that they received in free government money, suddenly starting to look like it may have paid off all their loans or fines. Um, so they only pay about 75% of it and all, but I think 25% is the number all, but 25% of what they pay, they get to write off on their taxes. Did you know that? Did you know that these major corporations, when we finally see the government come in and say, Oh, you did wrong. I’m gonna find you a billion dollars. The company says, Oh God, Holmes, who was Hari. They don’t have to pay the full billion. And then they get to write off nearly all that they do pay back to the federal government. So that Maybe 35 million, that these oil companies had to pay an environmental damage. Yeah. Suddenly it’s starting to look like maybe they only paid about five. There’s only about five in real losses. And they got 32 million from the federal government, from our tax dollars. Yeah. They made out like bandits because that is exactly what every major corporation in this country is at this point, they’re bandits, they’re bandits. And we are the people getting stolen from, by these corporations and the federal government is there to help them rob us blind.