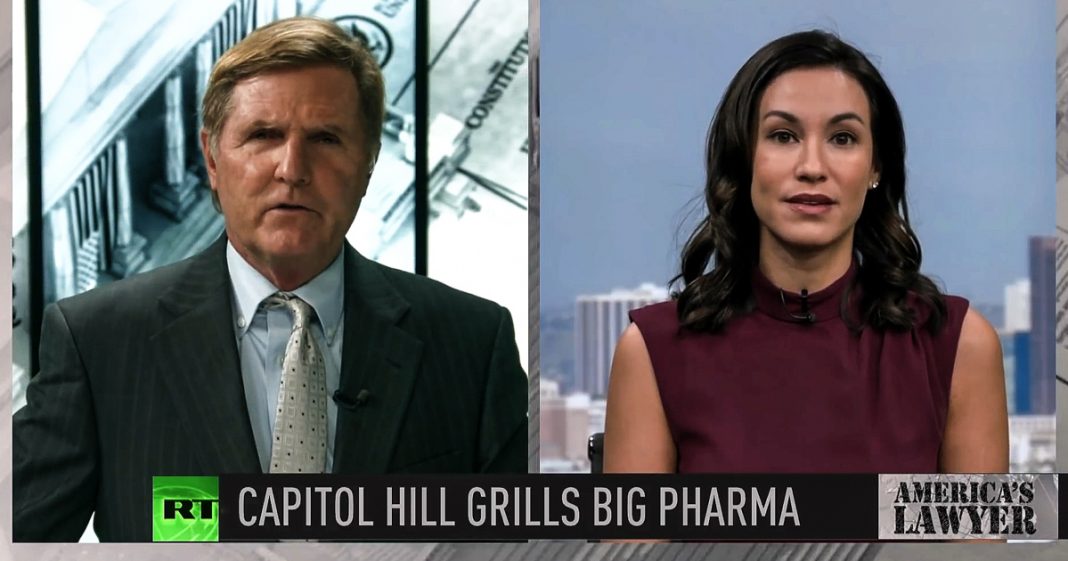 Mike Papantonio:             Members of the house committee on oversight and reform have blasted big pharma executives for price gouging, increasing the cost of life saving drugs for personal profit. Brigida Santos joins me now to talk about this. Again, Brigida, this is something we’ve talked about so many times and it, the story doesn’t get any better, you know, if you take a look at it. The question that I have is, what has this committee actually discovered about the role of big pharma and CEO’s in America’s drug pricing? What have they, what could have, what can they put on paper?

Brigida Santos:                   Sure. Well, after nearly two years of investigating the skyrocketing costs of medicine in America, the committee has found that the CEOs of some of the world’s most profitable drug companies are increasing drug prices simply to make themselves rich. Now, internal documents also show that these drug companies are targeting the United States for the biggest price hikes in the world, because they know that the federal government is legally prohibited from negotiating with drug companies to lower the cost of prescriptions for Medicare beneficiaries. Now, according to the documents, the price of the same drugs in other countries are significantly cheaper because European governments are legally allowed to set those price limits. And Mike, to give you an idea of how big of a problem this is, in the US drug companies have increased the price of over 600 single source brand name medicines by over 21.4% between January of 2018 and June of 2020.

Mike Papantonio:             Brigida, as you know, I’ve, I’ve probably gone to major litigation with 45, 50 major drug companies, international drug companies to where I’ve had to get the drug either pulled off the market. I’ve had to get black box warnings put on it. I’ve had to get the FDA to actually do their job and, and uncover the fraud, the phonying up of clinical data. So I’ve been working with them a long time, but one thing we always find, we always find that document that asked the question, why can we charge more in middle America than we do in Germany? And you know what the answer always is, right in the document in writing, because we can, and I understand that’s their attitude. I’m wondering which executives testified during that hearing. And I doubt that question was asked of them, but which executives actually testified?

Brigida Santos:                   The committee heard testimonies from the former CEO of Celgene and the former CEO of Bristol Myers Squibb, which acquired Celgene last year. Now they sell the cancer drug Revlimid and have tripled the price since 2005. Today one course costs $16,000 per month. Members also heard from the CEO of Teva pharmaceuticals, which sells the multiple sclerosis drug Copaxone, and several patients who have relied on each of these drugs. One MS patient testified that in 2003 Copaxone costs $1,800 per month. Today, a monthly supply costs $6,000, which amounts to over $70,000 per year. That’s more than the median annual household income in the United States. So these are exorbitant prices.

Mike Papantonio:             Yeah. I mean, it’s interesting. The pharma, of course, the big, big drug companies are lining up in back of Biden. They want Biden elected because the Democrats, if you’ll remember just a less than a year ago, where you had Cory Booker, leading the charge to allow drug companies to keep their prices high, that came from the Democrats, it sounds like it’s upside down. Now you have, now you have Trump saying, I’m going after the drug companies, I’m going to make sure they lower prices. It seems like it’s a total flip on what we, what we would expect. And I’m wondering what reasons do the pharmacy CEO’s give to justify their hikes and really how, how ridiculous are those reasons? What’s your take?

Brigida Santos:                   Drug companies and industry lobbyists claim that they have to increase prices to fund research to create these life saving drugs and help cover the costs for those who can’t afford prescriptions. But the committee has concluded that those claims are completely bogus. During the hearing California representative Katie Porter, grilled former Celgene CEO, Mark Alles, take a listen to what she says, because it’s pretty important.

Brigida Santos:                   Alles says that today’s Revlimid pills are exactly the same as they were in 2005 and confirmed that his personal earnings were directly enhanced by raising drug prices. Porter did present some documents that backed that up, showing that he actually would not have received such a large bonus, had those prices not increased.

Mike Papantonio:             Brigida, here’s something everybody misses, in the pharmaceutical industry when we go to, go to war against them, there’s a term it’s called, it’s called big profits big risks. And what that’s based on is CEOs used to stay with the company 20 years, maybe even 25 years, maybe their entire career. Now CEOs are moving through these drug companies, Pfizer, all the big ones, Merck, all of them, they’re moving through and they have a five year plan. Most of the time. Now it’s moving to a three year plan, get in, make as much profit as you can and get out and leave all of the other problems for the next guy in line. So this is a big, if a CEO coming out of MBA school that wants to be CEO out of MBA school, he’s always going to gravitate to the pharmaceutical industry or the weapons industry, one or the other. Real quickly, what changes need to be made to prevent these awful, awful, you know, greed driven executives from taking advantage America’s, America’s sick?

Brigida Santos:                   Last December, the house of representatives passed HR3, the lower drug costs now act, which would require the federal government to negotiate price limits for certain drugs that have no generic competition and account for a significant government spending. The negotiated price would be available to both Medicare and private payers. While president Trump said that he initially supported the bill on the campaign trail, he now says he plans to veto it, but States are taking action. In California, Governor Gavin Newsome has just signed a bill that allows the state to manufacture its own generic prescription drugs, including insulin, to lower prices and take that pricing power away from pharmaceutical companies.

Mike Papantonio:             Brigida, thank you. This is a story that we’re gonna, it’s it’s a toss up. Does it get better with the Biden administration? It does not because I followed this. I, this is all 37 years worth of going after these pharmaceutical industries and it’s, it’s party blind. Republicans are just as bad as Democrats. Democrats sometimes are now leaning towards maybe even being worse than Republicans on this issue. Thank you for joining me.