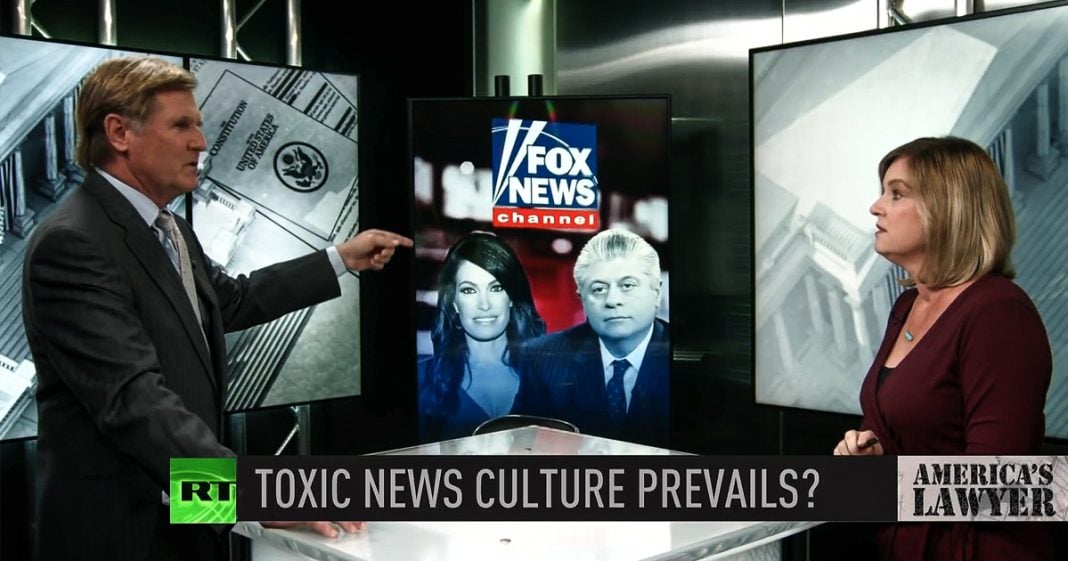 Mike Papantonio:             Fox news analyst and former judge Andrew Napolitano is in the hot seat being accused of very, very bizarre sex acts against a New Jersey waiter. Meanwhile, it’s been reported the same network dished out millions of dollars to settle former Fox host, Kimberly Guilfoyle, after those harassment allegations, you might remember. I mean, they were off the chart.

Mollye Barrows:                Well, this is what’s coming out in these lawsuits and he’s facing two separate lawsuits, one for 15 million from a waiter, another for 10 million. The spanking comes from the 10 million lawsuit. So apparently this guy, Charles Corbishley, when he was 20 years old, back in the late eighties, 1988, he was up in his court when he was still a federal judge in New Jersey, basically saying he was charged with arson and burglary. And you’re not gonna believe this, but his attorney at the time, Hollis apparently later got pled guilty to some sort of tax evasion charges that were related to federal running a national national prostitution ring. So this kid’s alleging that his attorney basically set him up with the judge saying it could go well with you if you go shovel snow off his house. So he shows up one day, 20 years old facing arson and burglary charges. He was dressed normally. However, the former judge was not, he was in a overcoat and he was like, it could go well for you, if you do X, Y, and Z. And so he did X, Y, and Z, and it did go very well for him. He got, ended up getting probation, community service, whereas his codefendant got several years in prison.

Mike Papantonio:             But, so this guy comes forward and says, you know, this really happened. They’ll, what’ll happen next is we’re going to hear a lot more stories like this, don’t you think?

Mollye Barrows:                Well, and that’s what the attorney who’s representing both of these men. And by the way, Napolitano has filed his own counter suit against the first one, the kid who said he was molested essentially when he was, well, he’s not a kid, he was 20, but you know what I mean. He was in a position of not being powerful, but he filed saying, hey, you’re wrong. You’re just trying to undermine me. You’re trying to build a, you know, make money for yourself by defaming me.

Mike Papantonio:             Can I go, can I go on, there’s just such a big list. What was the Kimberly Guilfoyle story? Tell me about what’s going on with her.

Mollye Barrows:                She was one of the boys, it sure looked like. One of the Fox boys back in the day when it was, you do this for me and I may or may not do anything for you, but I’m going to ruin your life if you don’t, if you tell anybody. So basically, you know, is that same time period. She had an assistant right out of college. They hired her, Fox hired her assistant to work for Guilfoyle and this other guy, Eric Bolling. And in a nutshell, she just said that Kim Guilfoyle was very lewd, very crass, openly talked about her sexual escapades, showed pictures of male genitalia on a regular basis. Either ones that viewers had sent or ones that she had taken of her own little escapades. Now, mind you, this is, you know, Don Trump, Junior’s girlfriend.

Mollye Barrows:                She’s running Trump’s campaign. He’s been accused of a few things, including payoffs to Stormy Daniels. She’s accused of the same thing, trying to pay off his assistant when this investigation into Ailes came about at Fox. She was still there crusading for Ailes saying all y’all need to support him. And other women said, well, you know, we anyway, you know, dozens ended up coming forward, but she acted just like the men that they were accused and being investigated of all this sexual abuse and harassment.

Mike Papantonio:             Okay. So what is Murdoch, what’s the Murdoch family doing while? I mean, they’re looking at all this.

Mike Papantonio:             They’re going to find a lot more stories about the perv, Napolitano. What is the network doing? Are they saying, you know, come here, judge, we got another job for you outside of the network.

Mollye Barrows:                Right. Something that, you know, that’s a good question. I’m not sure if he’s taken a temporary leave of absence, they’ve not commented directly on it right now. I think they’re basically trying to wait and see what happens. But as far as the Murdoch boys go, New Yorker did a great job. They broke this story with Guilfoyle and they went into some of that, like basically the contradictions to the role that she has now. She even, and, and, you know, they were part of that breaking the story of Weinstein and the me too movement. So they talked about how she even hosted a round table for Fox, you know, going back, hike, hearkening back to when she was a prosecutor. I defend victims. I believe victims. When in this lawsuit that she’s facing from her former assistant, she did exactly what these men were accused of doing to the women.

Mike Papantonio:             You know, I fought, you know, I used to do, I was the only liberal commentator on Fox. Did you know that? In the early years. Yeah. So Eric Bolling was on the other side of me in these big arguments that we had in Fox news.

Mike Papantonio:             And, you know, so I was, I was the liberal commentator and I did watch, I did watch the story against Eric develop,

Mike Papantonio:             But as I was watching it, I was going, oh, I’m not so sure this doesn’t run real, real deep because there were so many people coming out. To me, they never proved anything with Eric. That was, that they never really showed anything with Eric Bolling. But in that process, these people came forward and you started hearing a lot of different stories like this.

Mollye Barrows:                Well, and that’s what they said about her because this assistant who filed a lawsuit against Guilfoyle basically saying she walked around her apartment naked, wanted her to massage her thighs, just weird stuff. And she shared that this assistant was shared with her and Bolling and in the suit, it says that Guilfoyle encouraged this young woman to have an affair with another Fox news employee who was trying to pressure her to do sexual favors. They don’t say it’s Eric Bolling, but you kind of get that impression.

Mollye Barrows:                Because this same assistant ends up filing a sexual harassment allegation against Bolling as well.