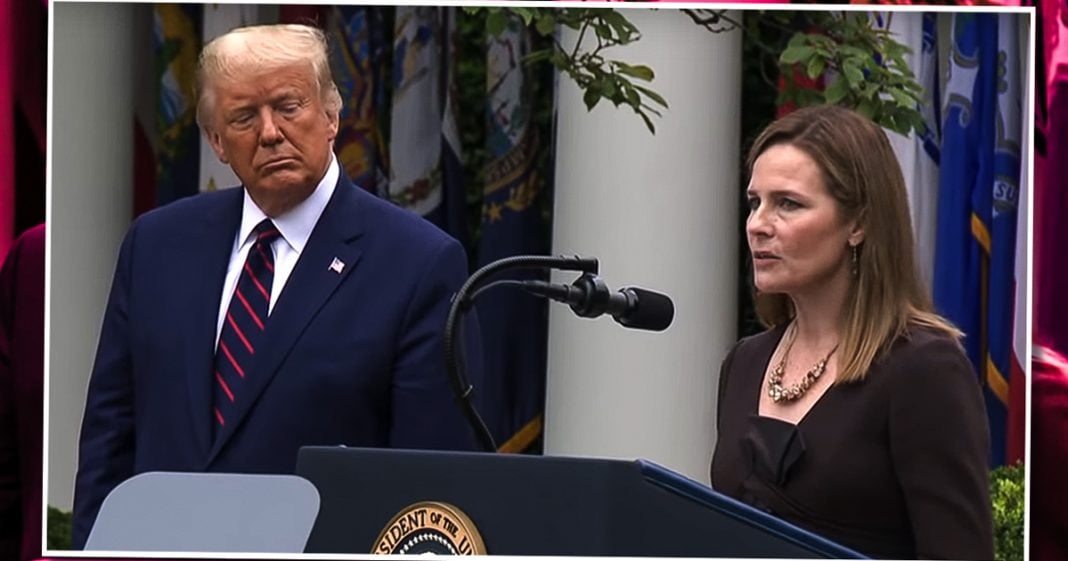 Former Trump pal Omarosa Manigault told MSNBC this week that the White House staffers that she’s in contact with are calling the Amy Coney Barrett Supreme Court announcement as “The Rose Garden Massacre” after attendees at this event continued to be diagnosed positive with the virus. Ring of Fire’s Farron Cousins explains what has happened and why it matters with the White House.

Former Trump aide and former apprentice contestant Omarosa back in the media this week, letting us know exactly what’s happening behind the scenes at the white house. And this was actually what was happening behind the scenes of the white house while Donald Trump was in the hospital. You know, when the big boss is away and, uh, the employee starts to talking cause Omarosa, according to her is still in close contact with plenty of people who work at the white house. And according to what she had to say on MSNBC this week, employees, staffers of the Trump administration have referred to, and they’re starting to call the nomination ceremony of judge Amy Coney Barrett to the Supreme court, the quote Rose garden massacre, because after all it is now apparent at this point that that was the super spreader event. All those Republicans packed in tightly together. Few, if any masks being worn, they believe this is the event that caused it.

And they’re referring to it as the Rose garden massacre. And I gotta say, it’s pretty apt descriptor, right? Cause that’s what, this is. Every single person in attendance there knew the risks and they knew what kind of recommendations were in place from officials. These were not yahoos off the street. Okay. These were not people who would go and protest having to wear a mask. No, no, no, no. These are people in the inner circle of Republican politics. They know what’s really happening. They see beyond the spin, they see the actual real reports. They know the doctors, they’ve all personally talked to Fauci. Most likely they know how dangerous this really was. But, but you couldn’t give the impression that it’s as bad as people say it is because then, Oh my God, you might be telling your governor, Hey, stop opening up bars and restaurants in my state. Hey, start closing the economy back down again. Because apparently based on everybody wearing masks here and socially distance, this is bad. They couldn’t send that message. So they didn’t send the message. They all sat elbow to elbow, shoulder to shoulder in that crowded Rose garden. And here’s the thing that people don’t understand because they see, well, they were outside.

It’s possible, Nate probable, when you’re standing next to somebody that even if you’re outside particles from their mouth can still go into yours. They don’t just immediately travel straight up or straight down because of gravity. I don’t know what you morons are thinking, but just because you’re outside, doesn’t mean you can’t spread it or contracting. Ah, I don’t know. Sometimes I feel like I’m the only sane left and that actually makes me crazy because you see it all the time. And I’m not even just talking about at this point about the super spreader event at the white house. I’m talking about people who think, Oh, it’s okay. If I had a gathering of 30 people, we’re all outside.

You still get it. If you ever been outside talking to somebody and you can smell their breath, okay, you can still get it. You’re going outside. You see what he call for sneeze. You’re been outside talking to somebody when it’s really cold and you can see their breath folks. That’s what happens. Yeah. It’s more likely you’re going to catch it inside because your breath doesn’t have anywhere to go. But even when you’re outside, the first place had goes to straight out. I just, I don’t understand. I don’t understand the stupidity in this country. I truly don’t because at this point, that’s the best way to describe it. And these Republicans at that Amy Coney Barrett event helped spread stupidity, not just the virus. They spread stupidity. They had the opportunity to set an example to wear their masks, to be six to 13 feet apart. And they failed because they don’t want people to know how bad this thing is. And even when Trump got airlifted to the hospital, plenty of his supporters still thought the whole thing was a hoax.