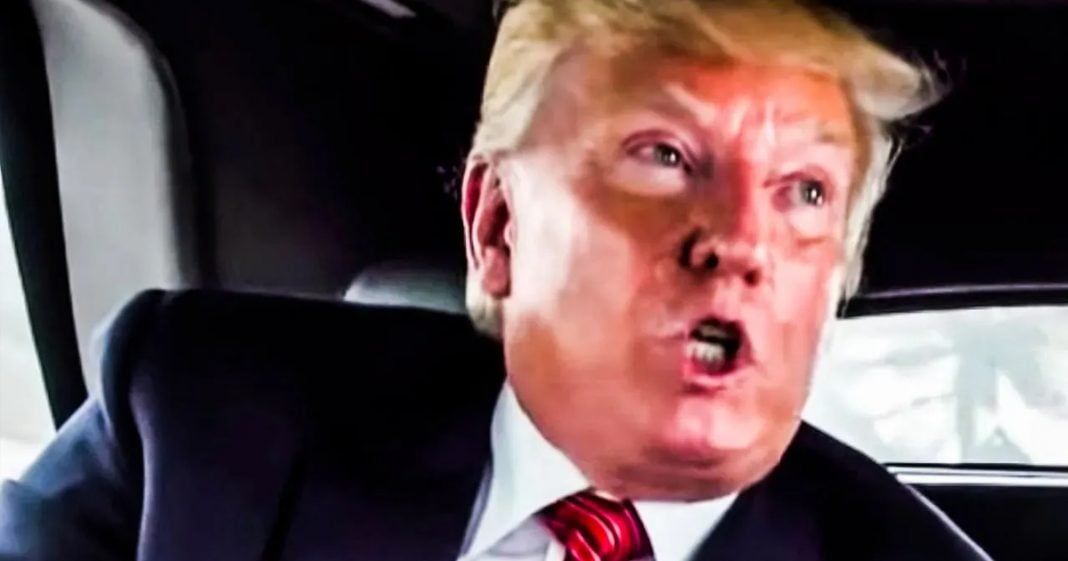 Donald Trump now believes his own paranoid delusions about the Obama administration, and during a Fox News interview on Thursday he actually called for Attorney General William Barr to indict Joe Biden for spying on his campaign. This is probably a good time to remind everyone that Trump is the one who broke the law by seeking to obtain dirt on his opponent. Ring of Fire’s Farron Cousins explains what’s happening.

Yesterday, Donald Trump, uh, did an interview with Fox news host Maria Bartiromo where Donald Trump told Bartiromo that he would like for William Barr, attorney general of the United States to indict Joe Biden, his rival, because according to Trump Biden and Obama, as Trump put it, these rivers spited on him. Uh, what he meant was they spied on him. But what he also meant was I’m a desperate liar and I’m making stuff up and I’m willing to abuse the authority of this country that was given to me, uh, in order to maintain my power. That’s that’s actually what he meant to say. He just screwed up a little bit,

Or they’re not like massive protests and riots in the street right now, when we have the president of the United States actively calling for the attorney general to arrest his political rival based on a made up lie that he himself created. Right? This isn’t something that Donald Trump heard somewhere else and said, Oh my God, that happened. Oh, let’s do he made it up. He made up that lie. And I know Republicans watching this buddy dude, spy on him. No, actually he didn’t. They had a Pfizer warrant against somebody who happened to be a member of the Trump campaign team. Who, Oh, would you look at that? They later on got prosecuted for it. Yeah, there was no impropriety with the Pfizer warrant folks. It was not a blanket warrant to go spy on the Trump campaign. That is a lie. And anyone who says otherwise is lying to you.

Donald Trump was not spite on Mike Pence was not spite on Joe Biden. Wasn’t spying on anyone. That’s the reality. And I know Republicans don’t like it, but they need to accept it because this thing has already been investigated multiple different times. And you would think that after four years of making this claim, if they had any evidence whatsoever to back it up, they would have arrested people. But turns out just simply spying on somebody. Isn’t a crime. If so the entire intelligence apparatus in the United States would be in prison. But Trump, if you’re mad that a member of your campaign, uh, did get eavesdropped upon, maybe you should take that up with George W. Bush, right? You know, that Patriot act really expanded those powers as he, that happened under Republicans. I know Democrats went with it and I know Obama kept it in place. And I know that domestic spying occurred under both administrations.

I’m not an idiot, but it sounds like Trump’s beef really is with the Bush administration for wanting this Patriot act and all those extended powers and the powers that Obama left in place. And the powers that by the way, Trump is actually still using to this day. You know, domestic spying still happens here in the United States. And most of the telecom companies are playing right along with it, working with the federal government to do that. The bottom line is this. Trump is trying to abuse his power to harm his political rival. That is how desperate this man has become. This is not a well person. I mean, Donald Trump is not well. And I don’t just mean the, the COVID or coronavirus actually ravaging his body right now. What I’m talking about is mentally, this man’s not well, it’s been obvious to mental health professionals for a very long time that he is not well, but he is also on a medication that messes with your head. Dexamethazone the corticosteroid that he is on. You know, hopefully his dose, you know, the round of steroids in soon. I know you cannot stay on them for, for too long. Uh, they do cause longterm effects if you’re on them for too long, but it’s absolutely messed with his brain and something. Someone has to start talking seriously about the 25th amendment.