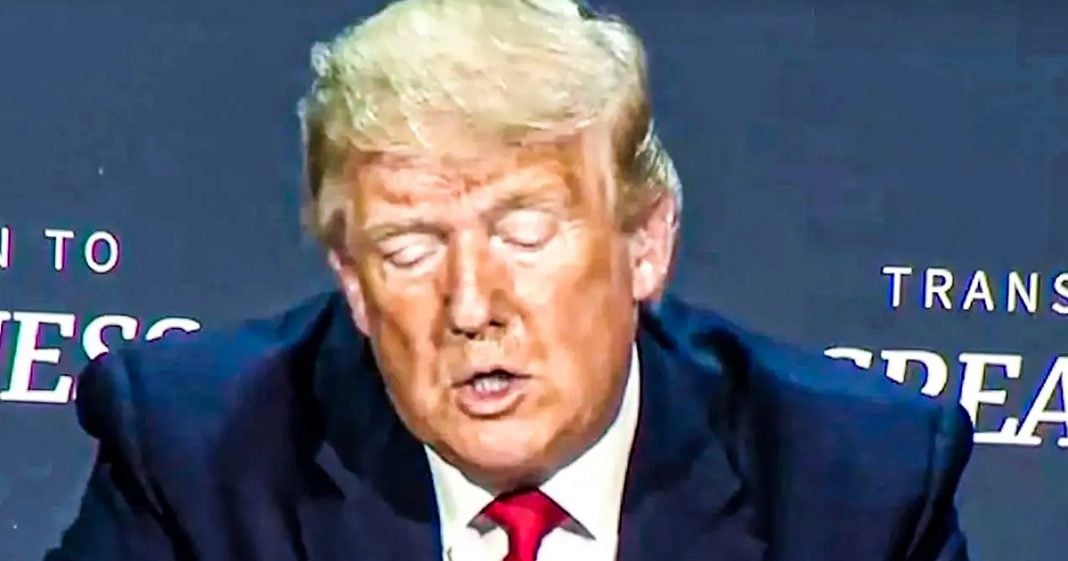 The president is descending into full-blown madness, and it is actually quite terrifying to witness. On Thursday, Donald Trump sent out a deranged tweet claiming that Joe Biden would destroy the suburbs, shut down the economy, take your guns and destroy the police. And that’s only a fraction of what he claims this version of Joe Biden will do if he wins in November. Ring of Fire’s Farron Cousins discusses this.

You know, this presidential election will be a whole lot better. If the version of Joe Biden that lived in Donald Trump’s head was actually the version of Joe Biden that we got in real life. Because according to the Joe Biden and Trump’s head, or according to Trump about the version of Joe Biden, living in his head, that dude is a full blown, like absolute socialist wants to make sure people are taken care of, wants to end harmful environmental practices wants to reform the prejudice within our justice system. The guy’s crazy. Trump says while also saying that he supports things that guess what a lot of people actually agree with right now, Donald Trump on Thursday, uh, as part of his continued descent into pure madness, tweeted out the following. And this is all one tweet Biden will shut down the economy at the tip of a hat, raise your taxes, knock out your second amendment and defund or close your police.

The suburbs would be next. Get ready. Also an incredibly packed the United States Supreme court. This is not what the USA wants. Hashtag MAGA, actually, a lot of those things and be honest with you. If you look at the polls, cause I know you look at the polls all the time, cause you talked about how fake they are. So you see them. You just don’t believe them. Um, if you look at the polls, a lot of those things, actually the public does support. They really do. The majority of people actually support shutting down to stop the pandemic. A majority of people do support the reforms that have been proposed about policing so that they stop killing unarmed people. Um, court packing a little different, except for the fact that a majority of people actually think the next president should be the one to pick the candidate.

So you’re kind of barking up a wrong tree. Not only are you laying out a bunch of issues that are one totally false, like now literally none of the things he’s talked about are going to happen. And I got to admit, I am a little surprised that Republicans think their base is stupid enough to keep sticking with the whole second amendment thing. I mean, how many times have Democrats had enough power in DC to actually do something about the second amendment yet? They always failed to do it. It happened during the Obama years, they actually had the house, the Senate, the white house. What do they do about gun control? Nothing, nothing. Just like when Republicans have the white house, the house, the Senate and the Supreme court, they don’t do anything about abortion because they don’t actually care about it. They just need it as red meat to throw their base.

They’re not really going to do anything with it. Folks. They’re not ever wake up. It’s just like the second amendment thing. We all know it’s not true, but they throw it out because they think their base is stupid. That’s why they throw out the abortion issue. They’ve had a chance to do stuff about it. They refused to do it at the federal level, state level. They’ve tried. Um, but all these other things shut down the economy, nobody’s saying shut down the economy. What we’re saying is send checks to individuals. Let everybody keep working from home. And if they have money, then they will be able to continue to support economies. Even from home, you can order things. It’s crazy how that works, right? That’s all we’re saying. Trump’s panicking. And in his panic, he is coming off as desperate and downright crazy. You know, when you’re down 20 points in the polls like this man is this, isn’t the message you want to send?

You know, this isn’t the image you should want to portray to the American public yet. It is. He is unhinged. He is out of control. Nobody on his staff, whether it’s in the white house or with the actual campaign can get him under wraps. He is torpedoing himself and I am here for it all day long folks. I love this. He’ll never blame himself for losing this election. But if he loses and it’s looking like he’s going to right now, he will have no one to blame, but himself. Oh, he’ll blame everybody else, but him, but we’ll all know. It was absolutely because of the level of crazy that we get to see and tweets like what he sent out yesterday that we have mean not just in tweets, but in policies, actions and speeds. Since the day he stepped into office.