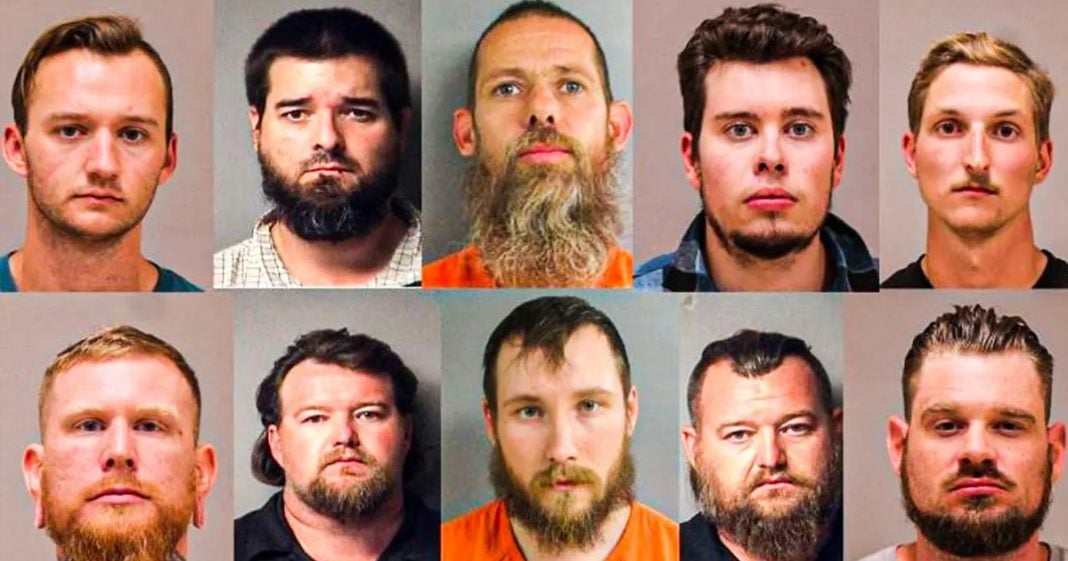 The FBI has announced that they have thwarted a plan by right-wing militia members to kidnap Michigan governor Gretchen Whitmer. The plan picked up steam among these right-wingers due to the mask requirements that the state had put in place, according to the affidavit that has been released. Apparently having to wear a mask is grounds for a violent overthrow of the state government to these deranged people. Ring of Fire’s Farron Cousins discusses this.

According to a new affidavit filed yesterday, Antifa broke some more windows or I’m sorry. That’s, that’s actually not what it is. The FBI thwarted a plan by right wing militia members to kidnap democratic Michigan governor Whitmer. So while Donald Trump is telling us and conservative media is telling us, and, you know, crackpots like Andy know, and he, and miles Chong are telling us that Antifa somewhere over in Portland is, is some kind of threat to the United States and to our government, to our way of life. Uh, what actually is the truth is that right wing militia groups pissed off because they have to wear a mask, wanted to kidnap the governor of Michigan and take her according to the affidavit, somewhere over in Wisconsin, according to the FBI and the affidavit that was released by the attorney general in Michigan, they had the plan and they had been talking online for months. They had basically gotten mad about the fact that they had to wear a mask. That is what started this. They thought it was oppression because they had to wear a mask. They were mad that gyms weren’t open. So what did they do? They gathered up 12 of them were in the affidavit and they wanted to grow their numbers. So they said, go out, talk to your neighbors, talk to your friends, start recruiting people to come in.

You know, let’s, let’s make this plan happen. Let’s go get this governor because we don’t want to wear a mask. These poor little man babies, who again are right wing militia. That’s how pathetic they are. That’s how cowardly they are. That’s how whiny and bitchy they are. They’re like little babies that need to have their diapers changed. But now they’re going to go to federal prison for a plot to overthrow the government in Michigan folks. Do you see how ridiculous this is? Not only like the response, like, can you wear a mask? What if we kidnap you instead? No, no normal person is going to have that kind of response to it. Uh, there’s something wrong with those people. If that is your go to like, well, it’s either we have to wear a mask to go to the grocery store. Or what if we just overthrow the government of Michigan and stuff? I don’t know. It’s a toss up. These people are nuts. And the Republican party by embracing the people like Andy know who tell us that Antifa is like the worst threat in the world.

By embracing those people, you’re empowering the wing nuts. You’re empowering the militia by encouraging them by cheering them on. When they show up at the Michigan state house, armed with AR fifteens, screaming in the face of the guards, this country is sick and it’s sick with something far worse than COVID-19. It is this absolute crazed mentality that any attempt to take care of other human beings is somehow oppression because that’s what, this is the mask isn’t for you. The mask is to protect other people from what you may have that you don’t know. God forbid we as a country, take five seconds or maybe be slightly inconvenienced for a few moments to take care of others. Nope. You asked people to do that. Suddenly you’re looking at militia plans to overthrow a state government. That’s how crazy we have a nation has become. And that is because Republicans have fostered that belief amongst their followers.