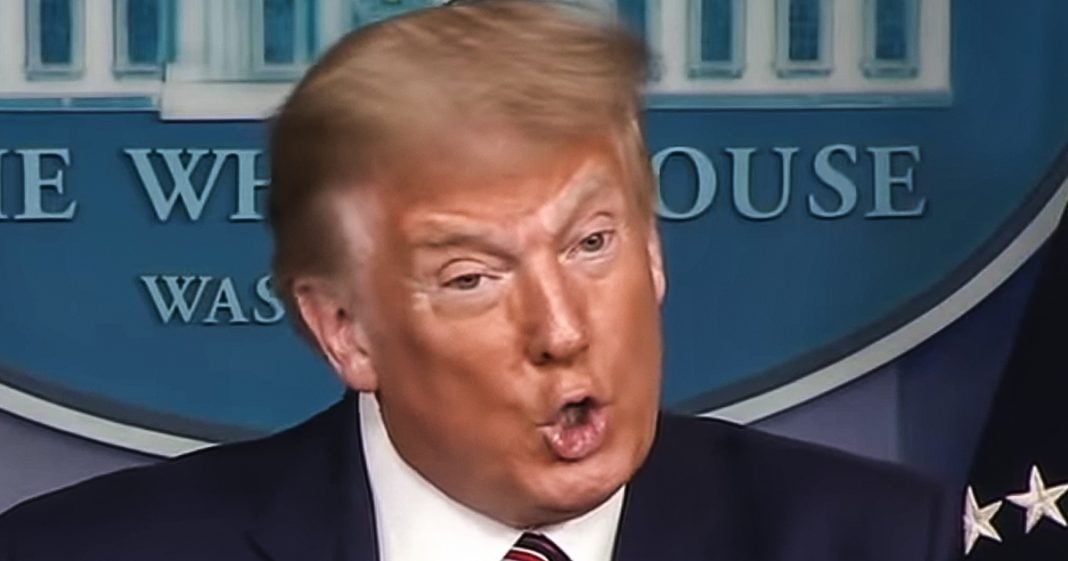 Donald Trump is receiving corticosteroids for his COVID-19 infection and it shows. If you want to know what kind of effects these medications have on someone, just scroll through the President’s Twitter feed. His roid rage is on full display, and that includes a tweet where he demanded another four years in office because Democrats allegedly spied on him. Ring of Fire’s Farron Cousins discusses this.

If you’ve ever wanted to see what roid rage looks like in practice. Oh, you’ve had to do over the last couple of days is go take a scroll through Donald Trump’s Twitter feed. The man is taking dexamethazone, which is a corticosteroid, which is used to, uh, reduce insulin [inaudible], uh, specifically, you know, in the law. It’s something that, uh, if you have regular Emma, do you have severe asthma attacks? If you get really bad bronchitis, this is the kind of drug they would put you on. Either that or a prednisone alone, things of that nature, they’re all cool steroids. And one of the side effects is increased irritability, anger. Um, one of them, cause I’ve read through them cause I’ve taken them plenty of times. Uh, for my asthma is Frank psychotic episodes. And uh, with dexamethazone you can also add grandiose delusions to the potential side effects and we’re seeing those, uh, we’re seeing those play out real, real big time right now with the president of the United States and everyone on Twitter is pointing it out.

But what happened yesterday, uh, was absolutely insanity coming out of the president’s Twitter feed. Um, one of the things that happened was obviously the email before we got the intelligence assessment released that allegedly was the smoking gun about Hillary Clinton being behind the Russia hoax. In reality, it told us everything we already knew that had already been confirmed, but Trump thought that was a smoking gun and he was pissed off that not enough people thought it was a smoking gun. So he got on Twitter and he let loose. He sent out this all caps tweet. He said, now that the radical left Democrats got caught cold on the non-friendly transfer of government. In fact, they spied on my campaign and went for a coup. We are entitled to ask the voters for four more years. Please remember this when you vote.

That was the one that really set people off. You know, we were entitled to ask the voters for four more years. Nobody said you weren’t entitled to ask voters for another four years. If you get them and then try to take another four years after that, then we got some problems that we’re going to deal with, but you’re entitled ass. You are asking by the way, idiot, you’ve been running for president for reelection for about four years, pretty much ever since you were sworn in as president, you started running for reelection then, but this wasn’t the only crazy roid rage tweet the president. So not yesterday, uh, I’m going through his feed right now. Here’s what we’re looking at. Here’s one. Oh, and he retweeted it himself too. I love when he retweets himself. It’s hilarious. And these are all caps tweets. By the way, the fake news media is the real opposition party.

Wow. Now do something about this. The biggest of all political scandals in history, Biden, Obama and crooked Hillary led the treasonous plot. Biden’s shouldn’t be allowed to run. God caught. Shouldn’t be allowed to run. This man is delusional. And honestly like it’s the steroids and this is the steroids. Um, another one Obama Biden, crooked Hillary and many others got caught in a treasonous act of spying and government overthrow a criminal act. How is Biden now allowed to run for president? Next one, Biden supports Cory Booker’s bill that will force low income housing in the suburbs, which will lower property values and bring crime in your neighborhood. If Dems win goodbye suburbs, wow. Way to throw a little bit of racism to Andrew roid rage like, Hey, Biden’s with the black guy to bring low income housing to your suburbs. Like you didn’t even try to disguise that one.

You’re straight up like, Hey, this black dude wants to bring more black dudes to your neighborhood. Goodbye suburbs. You know what? I’m not going to sit here and read any more of these disgusting ass tweets from the president. You get the idea part of this is who he is. And I think the steroids are not just amplifying it, but they’re really allowing us, you know, kind of like a drunk person who starts saying things that they’ve been wanting to say, but usually a little inhibited don’t do it, but no, no, no, no. Now we got a couple of them. They’re ready to let people know how they really feel. And I think that is what this medication is doing to the president. It’s not good. These crazed tweets that looked like they were written by a madman. That’s not going to help close the 21 point gap you have with Joe Biden in some polls. And some have that gap as low as 14 points. Your, your good friends at rasmussen the pro Republican pollster who always skews things towards Republicans. They have Biden up by 11 points. As it stands right now. You’re done. And go ahead, crazy on Twitter for the whole world to see isn’t winning you back any voters.