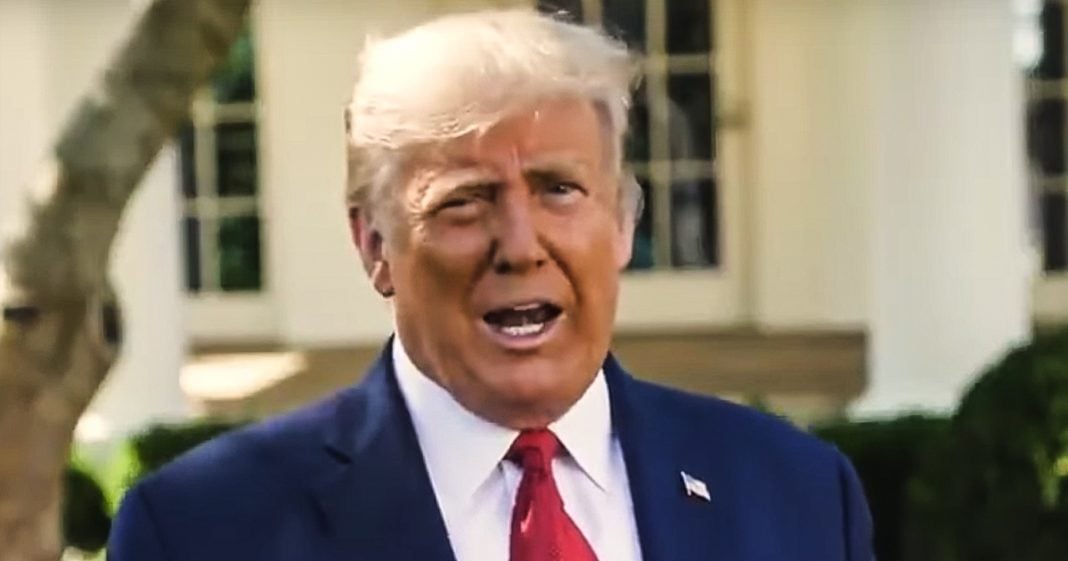 Donald Trump thought that he managed to land a fatal blow to the Democratic Party, but the public barely even paid attention. And for good reason: The information that he had his Director of National Intelligence release this week did NOT provide any new information about the Russia investigation, and it certainly didn’t implicate Hillary Clinton, as the President claims. Ring of Fire’s Farron Cousins explains the documents that were released and what they actually tell us.

Earlier this week, Donald Trump’s director of national intelligence, John Ratcliffe released what was supposed to be the full and complete, uh, intelligence assessment about the entire Russia investigation. From the very beginning, all the way through the end, it was all going to be completely, uh, unredacted. We’re going to get our hands on. Absolutely. Everything is what they claimed. But instead what they released was cherry picked information that was still heavily redacted. That didn’t prove anything that we really didn’t already know. So before we get into what was, and what was not in this new information, let’s talk about why it was released to begin with Donald Trump made the announcement that he authorized Ratcliff to release this information. And the reason Trump did this is because he needed an October surprise of his own. He sees the polls just like we do. He knows what’s happening. He knows that he’s in trouble. So he thought, you know what? If I can prove that they spied on my campaign, that it was all a hoax, that it was all perpetrated by Hillary Clinton, who he still thinks he’s running against.

Then, then I got a shot at winning this thing. So he says, all right, Ratcliffe do it. So the little rat master does it. And Trump starts tweeting out all day. Oh my God, they did it. They were spying. They did this. They did that. Um, except here’s the thing, none of that actually was in any of the information that was released In a lot of conservative outlets who were really some of the only people who talked about this, they only mentioned it briefly and they really didn’t even do that bad of a job, trying to be partisan about it. They didn’t say, Oh my God, it’s the smoking gun. They’re like, okay, well, here’s the thing. And this is kind of what it says. So now we’re just going to quietly move on a little bit. Cause it doesn’t quit say what he says. It’s hilarious. So what did we find out in this heavily redacted cherry picked information that the DNI released earlier this week? Well, we found out that Hillary Clinton, according to handwritten notes by John Brennan, uh, wanted to push the idea that Donald Trump was somehow, uh, the puppet for Russia.

Okay. I wish there was honestly, I wish there was more to tell you because that’s what we learned in the document. Oh no. Oh no. I did read the Fox news story on this. And it said, you know, the Democrats were the ones who paid a fusion GPS and Christopher Steele to come up with the dossier, blah, blah, blah. That’s still not even true. Like it is absolutely. If you read the Washington free beacon, the conservative paper were the ones who initially hired fusion GPS to dig up a dirty dossier on Donald Trump. After it was clear, he was to be the nominee. The free beacon said, we’re done. We’re not going to do this anymore. Cause now I guess he’s our guy, the Democrats, at that point, at that point after it had already been initiated, stepped in and said, well, hold up. Well, we’ll pay for the rest of it.

We were running against them. Now we need this. We’ll pay for it. That’s how that played out. It was conservatives who launched that investigation. Folks, not the Democrats, not to mention the fact that at that point, when they had that information, yet Hillary Clinton looked at this and said, Oh, it does seem like there is a, you know, that’s a compromising information that Russia has. Let’s push that. Let’s run with that. But at the same time, because of the connections and the criminal histories of certain people within the Trump administration, they had to get warrants on those individuals. They did not spy on the campaign. They spied on that person because they believe that that person was doing illegal things based on their history of doing illegal things.

And yes, Russia did interfere, sorry. I’m not one of those new cold war guys. I’m not one of those fear mongers about Russia. I don’t see Russia, uh, standing three feet behind me every time I say something horrible. No, but it’s obvious. We know Russia did do things. The extent to which they had an impact on the election is what’s up for a little debate. Their involvement in it is not. It is not, but that does not mean that Russia is the big, bad boogeyman behind every ill that the United States is suffering from. Not even close, but here’s the other kicker. And I think this is why this story fizzled out just as quickly as it popped is because we already have assessments from the Republican controlled Senate, from independent analysts, from our own intelligence communities, all of which tell us the exact same thing that yes, Russia was doing things in the 2016 election.

Some very minor, most, very minor, to be honest, like buying Facebook ads and spreading memes and creating bots on Twitter, if that’s all it takes to crumble our democracy, then we were kind of asking for it. At that point, I feel like if our country was so weak that a couple of Twitter bots took us down, were we ever really that strong? Nevertheless, those are the things that happened. The intelligence community agrees on it. The Republicans agree on it. Everybody agrees on that. That, yes, it happened. And they did it according to all these reports to the benefit of Donald Trump. We know these things to be true. And Trump thought that he had a smoking gun by saying, aha, they were trying to push this while literally everybody else’s like they were trying to push it. Yes, Donald, because we’ve all already determined that it was true.