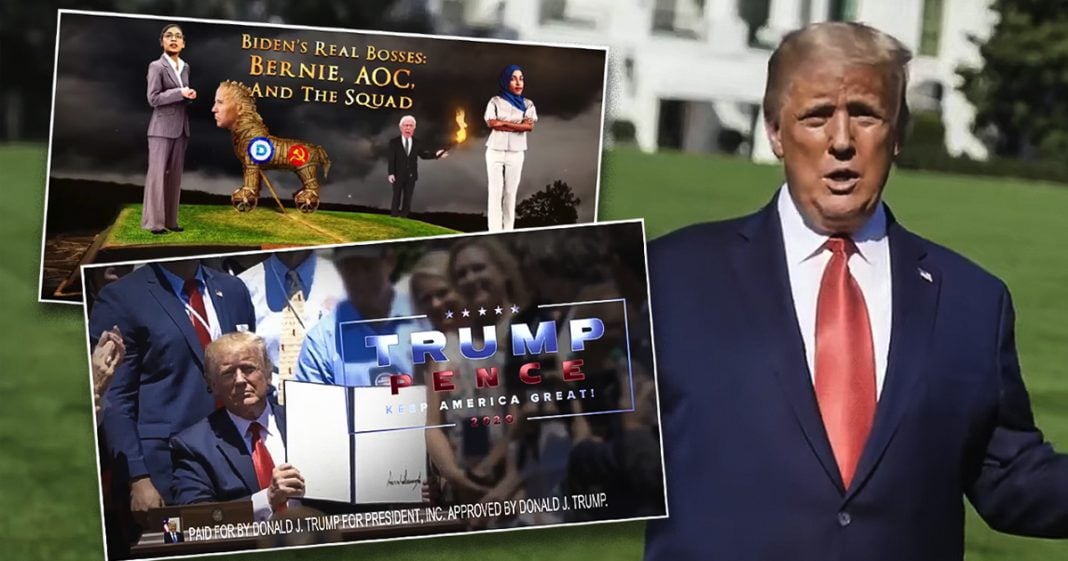 Donald Trump’s reelection campaign is clearly running out of money, as it was announced this week that they would be pulling even more ads from swing states with less than a month to go before the election. With Joe Biden absolutely destroying Trump in the polls right now, especially in swing states, this move could not have been one of strategy – it had to have been a financial decision by a bankrupt campaign. Ring of Fire’s Farron Cousins discusses this.

With just a few weeks left to go until the general election. One thing has become painfully clear for the Trump campaign. And that is that they’re probably out of money. Um, in recent weeks, this campaign that is trailing Joe Biden, even in the most conservative polls, the Rasmussen poll has him trailing Biden by 11 points. Uh, last few weeks Trump’s campaign has been forced to pull ads from vital swing States that they kind of have to have if they’re actually serious about winning the electoral vote, Ohio, Iowa, Michigan, Minnesota, and Wisconsin, and several of those States, Donald Trump has had no ad presence whatsoever for nearly a month. Ohio and Iowa have been radio silent from the Trump campaign for almost a month. Uh, since September, Wisconsin and Minnesota have seen a much scaled further back ad push by Trump and Michigan, they just announced they were cutting back by about $5 million.

Same thing happened about a month and a half ago over in Arizona, which is a swing state now. And you’ve got an embattled Republican Senator Martha McSally, who is currently losing in her race against her democratic challenger. I believe it’s Mark Kelly. Uh, he’s killing her and Trump’s losing that state folks at this point right now, especially based on the polling data. We could be looking at a massive landslide because it appears for all practical purposes that the Trump campaign has given up that they’ve absolutely given up any, you know, uh, chance of winning this election. And I don’t even think it’s by choice at this point. I think they’re being forced to do this because they don’t have the money. And what they’re doing right now instead is they’re sending more money over to Texas. They’re worried that Texas could turn. I wouldn’t even say turn blue, turn purple Travis. A one point lead in Texas and the latest poll, a one point lead in Texas. I have no doubt Trump’s gonna win Texas even without the extra money push that they’re sending over there. He would still win Texas. I, I don’t think that that’s a realistic thing yet. I think four years from now, Texas is a swing state, a hundred percent right now, Texas is red. It’s going to go red, but he’s having to throw all of his money in there just to try to make sure it stays red.

He doesn’t have enough. So this tells me that he is willing to sacrifice Ohio, Iowa, Wisconsin, Michigan, Minnesota, Arizona, in the slim chance that he keeps Texas. And they’re also spending pretty big over here in Florida as well. But folks, those two States and then losing the entire Midwest. Yeah, that’s not going to do it for you. Trump can’t win without some of the swing States. And right now Biden’s beating him in all of them, all of them, all of them. I mean, I say it like that to get it into your heads. Folks, we have not seen poll numbers like this, and sure anything could happen and sure they were wrong in 2013. This is in 2016. It really truly is not. We are watching a man descend into madness. We are seeing what happens like this 2020 campaign of Donald Trump. I can promise you, this is going to be taught in political science courses for the rest of the history, the future history of political science as a case study in what not to do. It’s been that incredibly incompetent and corrupt because let’s not forget. You’ve still got Parscale. That’s allegedly under investigation for stealing upwards of $40 million. He also funneled over a hundred million dollars from the campaign into his own businesses. This thing has been mismanaged from the start, but I gotta tell ya I don’t feel bad for them at all. I want them to watch in horror on election night, as these returns come in, showing Biden, picking up swing state after swing state, after swing state. I want them to be humiliated because that’s what they deserve.