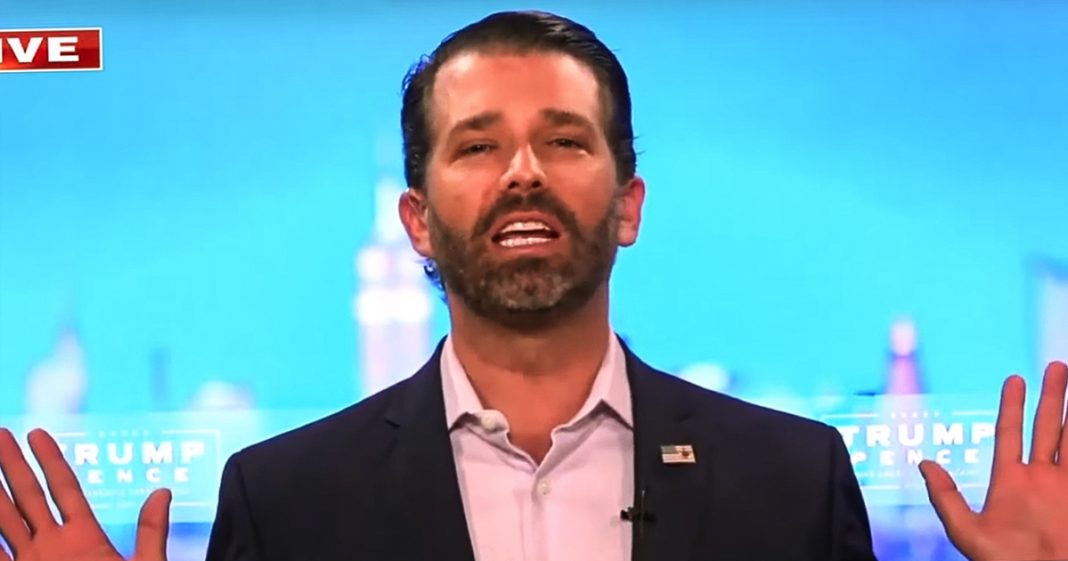 During an appearance on Fox & Friends Wednesday morning, Donald Trump, Jr. made the absurd claim that Nancy Pelosi is apparently suffering from “substance issues”. This claim came out of nowhere, but it was quickly viewed as projection by the online community who repeatedly claim that Trump is on adderall and that Junior has a taste for nose candy. Ring of Fire’s Farron Cousins explains what’s happening.

But that’s beside the point has her own substance issues. And then he says, but it’s obviously nonsense. Just like saying that Donald Trump jr. Uh, according to the Twitter world uses cocaine all the time. It’s obviously nonsense other than the fact that he absolutely exhibits the behavior of somebody on cocaine. We have no evidence that he does that. And it’s probably not true. So we can’t say for certain that he does, but he just see what I just did there though. That’s what he just did. You throw something out there, you have no evidence to back it up. And as soon as you realize that you could actually be sued for slander for it, then you say like, but it’s nonsense. It’s not true. So you say what you just said was not true so that you don’t get yourself sued. But I think it’s time for that.

I think it’s time for liberals to be a little bit more liberal with the libel and slander lawsuits. This is getting out of control. You have people like Donald Trump, jr. You have Eric Trump, you have Donald Trump, you have all of these other Republican politicians who put out these godawful statements, accusing Democrats of some of the worst behavior imaginable. None of it being anywhere near reality, frigging suing them. Can we put an end to this? Like the discourse in our country has gotten so crazy that you can just say whatever you want about your opponent. Now we can’t do that. Conservative media does it a lot, but they also, by the way, get sued a lot. But anytime a conservative feels like they got their feelings hurt from the media they Sue and then they settle. Cause it’s a lot cheaper for these media outlets to settle than it is for them to take this to trial.

So conservatives know how to use it. I think it’s time that liberals Democrats, progressives that all of us fight back. Somebody says something about you. That isn’t true. That hurts your reputation. You can Sue. You can. That’s how it works. As long as it hurts your reputation, not just your feelings you can. And I think it’s high time that we do that as for Trump’s Trump. Junior’s bizarre claims about Nancy Pelosi. There is no evidence to suggest that there is nothing in her behavior that would suggest that she is on drugs. You know, I really don’t believe that this one woman in her late seventies is going home and going on crazy Coke benders. Uh, I don’t even know that Trump jr is he has frantic behavior sometimes. And you know, sure that could be a symptom of drug use. It also could just be who he is as a person.

Same thing with his dad. Maybe he is snorting Adderall as claims have been made, or maybe he’s just a weirdo. We honestly don’t know. And I don’t think we’re ever truly going to know other than some accusations. If we had some photographic evidence, maybe it’d be a little different, but nevertheless, too, if you want to go after Nancy Pelosi, there’s like valid criticisms of Nancy Pelosi. You could absolutely throw out there, but instead you decided to make things up and not even like believable, make stuff up, not even like, well, Nancy Pelosi, you know, she wasn’t arguing in good faith. She came in and she said, Oh, I want to get all this money. No, you went outlandish with her. Like she wants to give her money to illegal immigrant from a ranch. She’s doing cocaine.

What, what, like, If you’re going to lie, it has to be a believable lie. You can’t go on Fox news and be like, well, my dad was going to negotiate weather, but she came in riding an alligator and then she summoned a giant squid monster that almost killed my dad. And then he was like, well, I can’t do this anymore. I mean, what was he supposed to do? And even if he, You had something that said something like that, Fox and friends would have been there, like, yeah. I mean, that’s, that’s Pelosi for you. If that’s policy, that’s what she does. If you’re gonna lie about somebody, at least make it something believable, not something so outlandish that even people who aren’t fans of Nancy Pelosi are forced to come out and defend her against the slander that you just leveled at her yesterday.