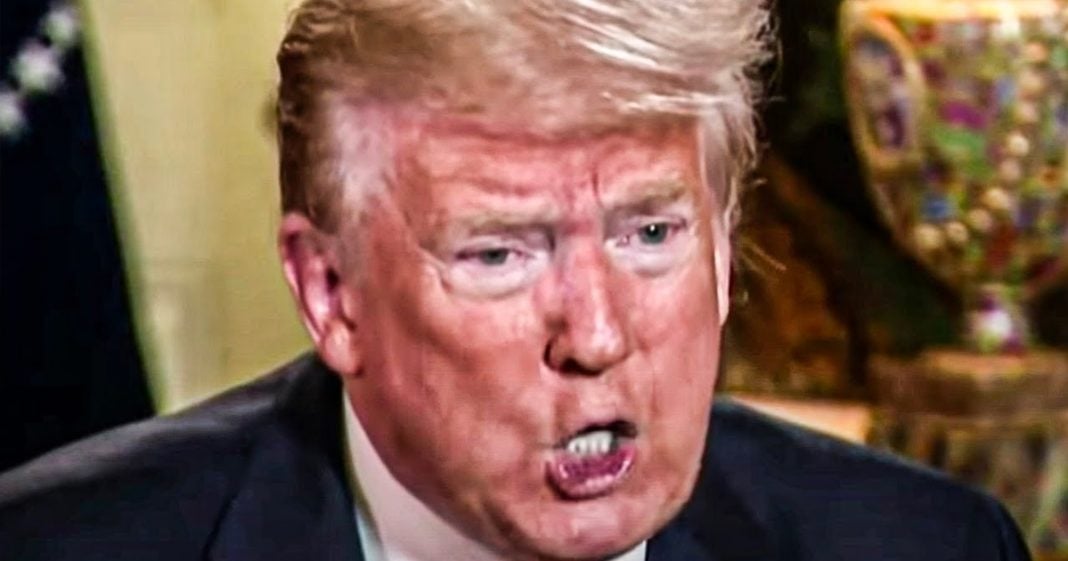 Donald Trump proudly proclaimed that there would not be a second round of stimulus checks for struggling American families until after the election, effectively telling the country that he was holding relief hostage unless they voted for him. Someone on his staff must have told him that this was a stupid idea, because later on in the evening he tried to backtrack and pleaded with Pelosi to send him a bill. Ring of Fire’s Farron Cousins explains what’s happening.

Yesterday afternoon, Donald Trump proudly proclaimed that the stimulus talks were over and that if you wanted a stimulus check, you were going to have to vote for him in November. And then after the election, he would immediately send out relief to the struggling American families who are working to stay above water and not be evicted in the midst of this pandemic and economic turndown. And then a couple hours passed. And in fact, actually, before I even get to that, here’s Donald Trump’s tweets. It was a series of tweets. I’m just going to read the first two Nancy Pelosi’s asking for $2.4 trillion to bail out poorly run high crime Democrat States money that is in no way related to COVID-19. We made a very generous offer of $1.6 trillion. And as usual, she is not negotiating in good faith. I am rejecting their request and looking to the future of our country. I’ve instructed my representatives to stop negotiating until after the election, when immediately after I win, we will pass a major stimulus bill that focuses on hardworking Americans and small business. Okay. So yeah, those are his own words. That is what he tweeted out. And there were a couple other tweets beyond that this is filled with law. Um, yeah, those crime-ridden cities that you keep hearing him talk about.

I mean, is there anybody in this country that actually buys that BS at this point? I know as a campaign talking point, it’s failed, but down here in Northwest Florida, where we get all of the Alabama political ads too, because we’re in, they’re a local news district, all of their ads are talking about the flag burning and the chaos and the anarchy in these, in these cities. And they never named the city, but they show footage. It’s all very grainy, all poorly filmed. There’s lots of graphics around it too. So you can’t really make out anything from it. Uh, for all we know, it’s not even coming from America in these ads, but the running on it and from conversations I’ve had with, with people in Alabama, they have no idea what they’re talking about. So even down here in the deep red South, they can’t point to anywhere in this country where, what they’re saying with these crime riddled cities and the anarchy and violence, they can’t point to where that’s actually happening.

Nobody’s paying attention to that. If it is happening, I understand there’s still some things up in Portland. Uh, but even that isn’t at any level that it was, you know, two, three months ago. So, so people stopped caring. It’s not a thing. What they do care about are the kitchen table issues. The kitchen table issues being finances. 61% of American households are struggling to make ends meet right now, tens of millions of people are facing eviction because they have not been able to pay their rent for at least one month. This stimulus check that is now holding hostage would have helped these people. In fact, Jeff Stein from Washington post tweeted out some awesome statistics on this. Here. It is close to 30 million jobless people to permanently see an income cut of 50%. And this is because the talks have failed. Uh, 40% of restaurants face closures in six months per surveys, tens of thousands of airline workers will be laid off.

And most of that is actually already happened. Uh, no stimulus checks at all, no rental relief money, no more funding for testing and tracing, no Medicaid or Cobra money or newly insured, no 100 billion to help schools reopen safely. And so there’s last points on there are, are some of the most important, and that’s actually what he’s talking about with money for Democrat cities. It’s not just to give Democrats in your so-called an arc, his jurisdiction money, what it was, was money for testing and tracing and to reopen schools. But you don’t want any money going to Democrat run cities as you call them. And so you torpedo the deal. So few hours passed and everyone and internet, world and pundit world and news world talked about what a stupid idiotic move by the president, right? I mean, you just announced, I am not giving people free government money before the election.

I mean, you want to get people to vote for you. You want to bridge that now, 21 point gap between you and Biden, according to a Boston Herald poll out this morning, 21 point gap, you want to bridge it, start writing some checks to people. You know, that’s going to help sway some voters. And you know that because that’s why you just cut the payroll tax right before the election. That’s why ahead of the 2018 election, you spent billions of dollars bailing out the farmers in the Midwest who had been hurt by your trade war, trying to buy their votes. And here you had the opportunity to buy all these votes from American citizens while at the same time, not that it matters to you helping them out. And you said, no, I’m not going to do it. I’m not going to do it because I want to stick it to those Democrats.

So then a few hours past Donald Trump gets back on Twitter shortly after 10:00 PM Eastern time. And he tweets the following. If I send a standalone bill for stimulus checks, $1,200, they will go out to our great people immediately. And I am ready to sign right now. Are you listening, Nancy? And then he also tagged at Mark Meadows at Senate majority leader, Mitch McConnell at Kevin McCarthy, Republican leader in the house at speaker Pelosi, net, Senator Schumer. That’s that, that tweet is what desperation looks like. He realized either he, it popped into his head, which I seriously doubt, but what happened? And I stand by this as somebody who’s been on these corticosteroids before he got enraged, a bit of roid rage, if you will, because it happens on these steroids, man, I’ll tell you it happens every time I take them. Um, we have to do it every couple years.

If I get a real bad, a bout of bronchitis, but nevertheless, they do make you go off the handle real quick, yelling, screaming, things like that, you know, not violent, but it just boils your rage and you want to get it out. And you typically get it out with words. And that is what he did there. This is a dexamethazone tweet. The first one, the first one wasn’t dexamethazone tweet. The second one was a far more rational. Somebody kind of talked him back from his anger tweet saying, listen, jackass, you just told people you’re not going to send them money. Now. He doesn’t care about helping people. He absolutely does not. He does not care about the joblessness. He does not care about the small businesses closing their doors. He doesn’t care about the looming eviction crisis. He cares about winning re-election. And if that is the only way you can get to them at this point, to get him to provide aid to these people who need it, then that’s how we have to approach it.

But folks not sending people, a government check three and a half weeks before an election that’s political suicide, being the person who kills that, which you admitted you were that’s political suicide. We all witnessed Donald Trump committing it live on Twitter. Um, so it is what it is. Nancy Pelosi has been working with Steve Minutian to get this package put together. So Minutian was, was a part of it. I know Trump wants to say, Oh, you know, Nancy Pelosi to minutia has been there every step of the way. You know who hasn’t been there though? Mitch, like Pelosi actually had to go around the Senate because Mitch McConnell refuses to work with her and go directly to minutia. And the two of them have been working on this for months on multiple different pieces of legislation, but they can’t ever get Mitch McConnell to do anything about it.

And we’re going to have more on that later today, but that’s where we’re at Mitch McConnell refuses to work. Nancy Pelosi to her credit is doing a pretty good job with this. Steve Manoukian to his credit is actually do a, not a horrible job with it, Mitch. McConnell’s not doing a single thing other than trying to pack the court. It’s not just Bacone Barrett. He’s also put through several other judges while this whole thing has been going on. And of course you have Donald Trump who is all hopped up on steroids who told us yesterday, it ain’t going to happen and then realized, Oh my God, Nancy, please come back to the table. I am so, so sorry. I did not mean to scream at you. I understand what’s at stake here and I really need to win.