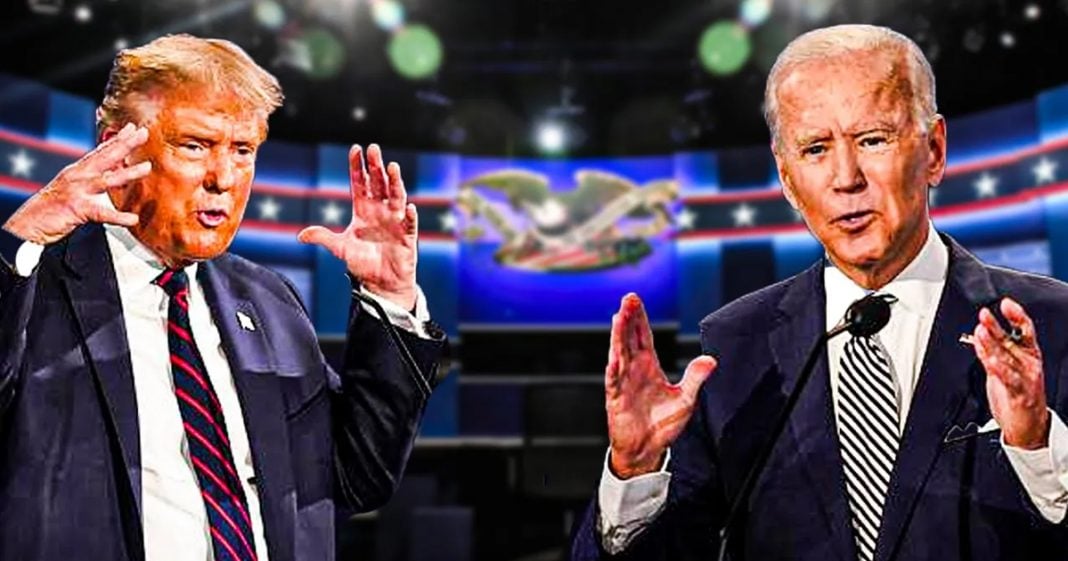 Even though he’s still battling COVID, Donald Trump insisted yesterday that the debates are still on. At this point he appears to be doing the best job of making the case for a Biden presidency, as this is a tremendously irresponsible move by the President, and the public agrees on that point. Not to mention the fact that he will come across as oafish and rude, which will only hurt him and help Biden. Ring of Fire’s Farron Cousins explains.

Yesterday, Donald Trump announced that he is very much looking forward to the next presidential debate, which is set to take place in Miami, a Thursday, October 15th. Here’s what the presidency, uh, tweeted. He said, I’m looking forward to the debate on the evening of Thursday, October 15th in Miami. It will be great. Um, yeah, here’s the thing that debate shouldn’t happen and Trump shouldn’t want it to happen. Biden has already said, like, he’s not a hundred percent sure he even wants to go there cause it’s very likely, it’s very probable that Donald Trump is still going to be infectious at that point. Uh, but to be honest, that’s, that’s the least of their concerns. The biggest concern should be the fact that Donald Trump could likely end up in the hospital between now and then again, you know, doctors are warning that the worst is yet to come is actually what they’re saying. Uh, so that’s a really stupid idea, but there’s an even bigger reason why it’s a dumb idea for Trump to push this. And that is because after that first presidential debate, the polls have swung wildly towards Joe Biden. The American public was absolutely disgusted by what they saw coming from Donald Trump on that stage. They weren’t thrilled with what they saw coming from Biden either, but they hated what they saw coming from Donald Trump.

And it didn’t do him any favors with polling swing voters started swinging towards Joe Biden. Undecided voters made up their minds for Joe Biden that evening. That is what all of the polling and all of the interviews tells us happened. After that crazy debate we saw. So Trump was given a golden opportunity here to say, listen, we’re not going to do it again. I got this thing, you know, there’s a little bug in me, so we’re just not going to have the debate. We don’t need the debate. Anyway, I know where you stand for. You’re crazy. You’re not worth my time. Like you could have done that. Your base would have eaten it up and you probably could have saved yourself even more damage than going to the debate. Here’s why he thinks he won that first debate. See, that’s the problem. It’s not that, Oh, he went and gave a horrible performance.

He wants a second debate to make up for no, no, no, no. He thinks he won. He thinks his tactics. There were brilliant. He’s gonna do the same thing. He is going to get hammered even harder in the polls, following that this is a stupid idea for him. And yet he’s pushing it because he’s so damn afraid of looking weak. And instead, what he’s going to do is look like an idiot. He has no problem looking like an idiot. He just doesn’t want to look like a weak idiot. For who? For who? For the proud boys. You want to look strong for them. You want to look strong for the, for the white supremacists. You wanna look strong for the neoNazis. You wanna look strong for the overweight and pale gross GOP donors. Who are you trying to put on this macho image for that? That’s what I don’t get. It certainly isn’t appealing to average everyday middle of the road. Americans is not winning you. Any fans on the left.

It’s just appealing to a bunch of people who are so insecure in their own manhood, that they would latch onto this elderly overweight orange hair piece wearing ogre because somehow they think that is what a man is supposed to look like and act like I got bad news for you. It’s not, but nevertheless, going to this debate is a bad idea, Joe Biden. I hope he backs out of it. I just straight up hope he backs out of it. He has nothing to gain. I take that back. He does have a lot to gain from going to this debate with Trump. But at this point, considering that a poll out this morning shows him up 21 points. He doesn’t even need to gain it at this point back out of it. Don’t risk exposing yourself to this virus. And you also want to avoid the coronavirus too.