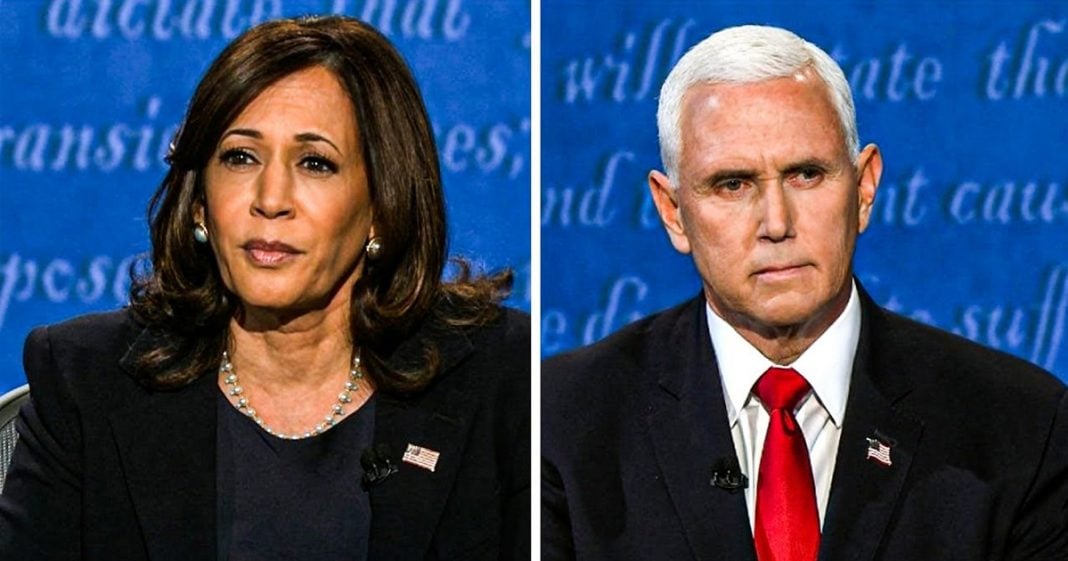 The first and only Vice Presidential debate is now in the history books, and the event was far less dramatic than the first Presidential debate last week. But the one thing that we learned is that Pence is a wolf in sheep’s clothing, and he was more than willing to steamroll the rules, the moderator, and even Senator Kamala Harris to get his points across. Ring of Fire’s Farron Cousins discusses the event.

Well, last night was the vice presidential debate and a kind of be summed up as the I the fly and the lies. I mean, those are really the big three takeaways. First and foremost. Let’s talk about the eye. Let’s go ahead and get that elephant out of the room. Mike Pence shows up and his left eye is absolutely bloodshot. Uh, not sure what happened there. Most people were actually speculating myself included about the fact that pink eye is actually a common symptom of COVID-19. So hopefully he had been tested, uh, because that’s certainly not something you want to bring into that auditorium with all the people, all the staffers, you know, your own wife was there, Kamala Harris, obviously the moderator. So hopefully he was checked out and it was just some kind of weird fluke that is, I looked like it was bleeding from the inside.

The fly. Mike Pence had a fly land on his head and it sat there for about two minutes. This was towards the end of the debate. And, uh, that kind of took over everything pretty much. Anything that had happened up to that point had really been forgotten about because Mike Pence had a fly on his head. And, uh, to me, the funniest part about that is Pence didn’t know he had a fly on his head. It was sitting there on his hair. He didn’t know it was there. So after the debate, somebody had to go up to him and tell him like, Hey, great job, by the way. Listen though, here’s the thing, uh, during the debate, which again, you did great by the way. Totally awesome job. But, um, you see, there was this fly. So I would love to know how that conversation went.

And then of course the lies, um, before I get into the lies, let’s talk about public reaction. According to CNN snap poll taken immediately after the debate, 60% said Kamala Harris won at 40% said Mike Pence wanted that is a very large gap, but still a narrow margin than we saw with the presidential debate. Mike Pence did not do horribly. He did not have any horrid outbursts like Donald Trump. He did attempt to steamroll the rules, the moderator and Senator Harris repeatedly. Um, the moderator did not step in and shut him down as she should have. But I think Senator Harris did a great job of shutting him down the lies, the one that stuck out the most to me, the one that pissed me off the most was his claims that American families, the average American family got 4,000 extra dollars per year because of Trump’s tax cuts.

That’s a lie that is a flat out bold faced lie. That’s what we were promised by the way by Paul Ryan and Trump and the Republicans when they were working to Ram this thing through, at the end of the year in 2017, they told us the average family would get between 4,000 and $9,000 a year. The truth is the average family got $0 a year and the government’s own numbers say that the government’s own numbers tell us you didn’t get any money. 88% of all the benefits went to those at the very top 88%. And I am shocked that Senator Harris did not counter him with that.

I mean, that is a very easy statistic to debunk and he repeated it multiple times and it was absolutely infuriating to hear him tell people, tell people who know that they didn’t get more money, that they did get more money. They look at their paychecks because these are people like me who live paycheck to paycheck. We know how much money is in that thing. We know when it goes up and it didn’t go up from your tax cuts. He should have been called on that, uh, with much more vigor than he was cause he wasn’t really called on it. Uh, some of the other lies, you know, the, the tough on China stuff. Trump has not been shot tough on China. Trump has gotten steamrolled by China, much like Ben steamrolled, uh, Senator Harris, whenever she tried to speak, Trump gave up on the trade war.

So we’re just kind of left in limbo where all of these tariffs are still in place. The Midwest is getting hammered by it. And Trump just says, Oh, well, we can’t figure it out well. So that was another ridiculous lie. But overall again, because he didn’t yell and scream and shout and say crazy things like Donald Trump did, uh, Pence was seen again, 60, 40, not that bad, he didn’t necessarily lose, but he also didn’t gain anything for Donald Trump. And that’s what he needed to do. And in that particular mission, he failed. And I always like to view things also through the lens of my wife, who is not a politically active person. So she looked at it, um, she knows very little about Mike Pence or, or Senator Harris. And she did say she found pins to be insufferable and that he seemed very insincere in everything he said.

Now I agree with that a hundred percent, you know, the phony Christian thing. It’s absolutely ridiculous. A lot of his lies, even for somebody who is not as politically astute, uh, you know, as, as somebody who does it for a living like my wife, who doesn’t even like to hear about politics, it annoys her, but even she knew she could tell, by the way he was speaking, that this man was lying through his teeth. And I am assuming that’s going to be the reaction we see through a lot of America. There’s going to be plenty of people who say that Pence won it, but those are people who would say that Pence won it. Even if he would’ve picked up the fly and just straight up eaten it because he hadn’t fed for a while like that, those people would always say that Pence won it. He didn’t do horrible, but he did the typical Republican job, which has repeat these debunked talking points. Don’t let anybody else get an F word in edgewise and just keep going. Even if they call you out on it, that is what Pence did. And in the eyes of Republicans, that’s always a victory.