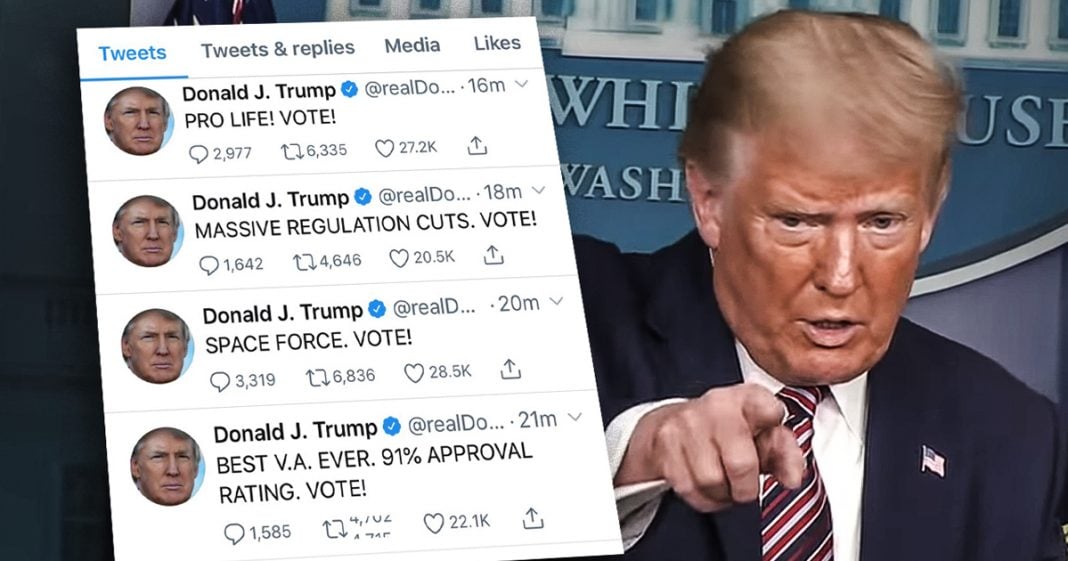 A CNN medical analyst has said that Donald Trump’s little hospital stunt on Sunday where he had Secret Service agents drive him around to wave at his supporters around the hospital should warrant a psychiatric evaluation. That, coupled with the information about his medications, is additional proof that the President’s state of mind is likely not in the right place, and considering the power that he holds, a psychiatric evaluation is sorely needed. Ring of Fire’s Farron Cousins discusses this.

A CNN medical analyst, a professor at George wash continue university by the name of Lena, when actually said that Donald Trump’s little, uh, COVID joy ride, we’ll call it on Sunday. Really screams that this man needs a psychiatric evaluation while he’s in the hospital. You know, you got them there. Anyway, I, for the most part, I mean, he’s not supposed to, he did you let him leave? But so other than that, like you got him there. You had him there, you could have in should’ve run this psychiatric event valuation just because what he did with that joy ride was so out of the ordinary. So beyond the realm of rational thought that that alone does warrant taking the loan, what’s taking up in his brain. Now I would like to add to that because we’ve got a little bit of a taste on Monday morning about what was happening, a little taste of what was happening in Trump’s brain.

And it didn’t look pretty and you can see it from the screenshots that everybody was sharing of his Twitter feed. Let’s read through a couple here. Uh, he just tweeted out random things. All of them in all caps, all of them with exclamation points, everywhere pro-life vote, massive regulation, cuts, boat, space force, vote, best VA ever 91% approval rating boat, 401k boat, biggest tax cut ever. And another one coming boat, like just randomly tweeting out things like not even full thoughts. Most of them 401k boat though. Those aren’t real thoughts. And some of them, you know, like, uh, healthcare, like he actually sounded like he was campaigning for Biden and some of the ones that I didn’t even read out there, but here’s the thing. Trump is on a medication called dexamethazone. Now, if you’re not familiar with some methadone, it is a steroid. Um, one of the side effects of this particular steroid is grandiose delusions. Also nearly every steroid you take. One of the side effects is Frank psychotic episodes.

One of the reasons I know this is because as somebody who grew up with asthma very frequently, I have had to been put on corticosteroids, uh, for my lungs, you know, to help get them up. And when I, when I’m on those, I get angry. I get irritable. Um, there was a time of year or so ago, maybe right around Christmas, I guess actually I was doing videos. And I don’t know if you noticed for like a full week. My, my face was red. That’s a side effect of those steroids that I was on at the time, had a huge, huge lung infection. Um, but they make you angry. They make you quick to anger. You’re not rationally thinking anymore. So, and I, and that’s, you know what? I go to my local family doctor and he gives me those. And they’re weak steroids. They’re like two or three milligrams.

They’re not much at all. I can only imagine how powerful this dexamethazone. The president is on what kind of dosage they have him on. And we saw the tweets, we see the tweets, we see the behavior. This man should not have access to the nuclear codes right now, but he does. He is on these steroids. And like most steroids I have to imagine it’s probably a, you know, five to 10 days, somewhere in that range dosage. Um, and because of it’s, COVID, it could be even more than 10 days. So I would think at least 10 days, and this is kind of based on my own experience of them. Usually I get a six day course for an average sinus infection that always turns into bronchitis for me. Um, th this, he shouldn’t have access to the coach. He shouldn’t have access to power right now, power should.

And I can’t believe I’m saying this, be temporarily transferred to the vice president while Donald Trump is on these medications. He’s already not all there when he’s not on these drugs. And when you take an unstable person and you give them medications where one of the primary side effects is that it makes you unstable. That’s a recipe for disaster, especially when that person has access to the full arsenal of the U S military. I don’t know about you, but I think I would feel, again, this is creepy to say better right now. If Trump gave those powers to Pence, sick, to say it, but it’s even sicker to think of what this crazy Luna take is going to do under the influence of the medication that he’s currently on. Luckily it’s all staying on Twitter. Hopefully it stays there. But I think the CNN analyst was right. They should have done a psychiatric evaluation, his behavior Sunday, getting in that car, driving around that was to feed his own narcissism, which is a clinical narcissism, a diagnosable narcissism. They had the chance and they blew it.