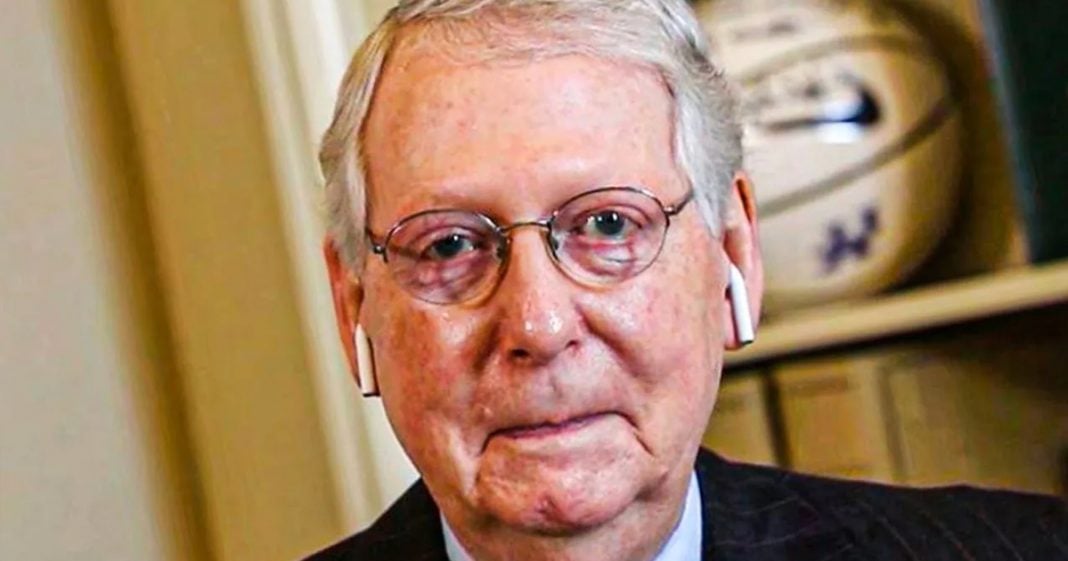 A huge majority of Americans believe that the Senate needs to postpone the confirmation of Judge Amy Coney Barrett to the Supreme Court until, at least, after they pass a relief package for struggling Americans. This strong majority includes 55% – a MAJORITY – of Republicans. Even Republican voters would rather see Mitch McConnell doing something to help people than ramming through another corporate judge. Ring of Fire’s Farron Cousins discusses this.

Donald Trump’s announcement yesterday, and then his announcement of the announcement later in the evening that he was not going to be involved in any more stimulus negotiations until after the election, uh, took Americans by surprise, right? Because as we’ve talked about up to this point, uh, Trump’s white house, uh, represented by Steve Mnuchin had been in active negotiations with Nancy Pelosi for quite some time. Now they had been on and off for months, actually. Uh, they had agreed on many things. They both wanted to get stimulus checks out to the American public. It was just Mitch McConnell that was holding things up.

And so Trump’s announcement yesterday shocked everybody that he was walking away from the table. But even before that happened, a new poll came out from the Hill and Harris X that showed that most Americans like by a staggering margin, most Americans, 74% were furious at Mitch McConnell for, instead of getting a stimulus relief package passed, trying to Ram Amy Coney Barrett down the throats of the Supreme court. And that majority, that 74% majority includes a majority 55% of Republicans. Even Republicans at this point are sick and tired of Mitch McConnell’s behavior. Now McConnell is still winning in the polls against Amy McGrath. The Trump loving Democrat, uh, I think by almost 20 points, like it’s ridiculous. It’s a blood bath. Uh, McConnell was going to be back in the Senate for another six years. That’s that’s a given, but the public is pissed off at him right now.

And most of that pissed off public is not in Kentucky where they could vote against Mitch McConnell. And that’s a problem for Mitch McConnell because they can’t vote against him, but they can vote against the other Republicans running for Senate. And if you think that Republicans are not freaked out about this right now, you’re wrong because the reports tell us they are, but they think it’s just Biden’s lead. No, no, no, no, no. Part of the reason Americans are pissed off at the Republicans controlling the Senate right now is because they can’t pay their bills. And those bills sitting on Mitch McConnell’s desk would allow them to be able to do that. They would allow them to be able to help get caught up on their rent.

But Mitch McConnell is the singular individual preventing that from happening. He is, this is not on Polosi. This is not on Schumer. This isn’t even on Kevin McCarthy or Steven Mnuchin. This is all on Mitch McConnell and the public knows it. And a majority of Republicans know it. And that to me warms my heart just a little bit, knowing that 55% of Republicans in this country say enough is enough Mitch, stop trying to pack the courts. Stop trying to make Amy Coney Barrett happen and get us some damn stimulus checks so that we don’t lose our house.

There is an awakening happening right now across this country. It is an awakening of Republicans seeing for the first time, what their party truly stands for. Now, those of us look, I understand if you’re watching this, you’ve always known what the Republican stand for. I’ve always known. I don’t need people saying they’ve always stood for. I know, I know I’ve been covering it for a decade and a half. I know they don’t is the difference. They didn’t see it firsthand because they don’t pay attention to it. Every single day, they have more important things to do. Politics is not their life. It may be mine, but it’s not theirs. They don’t go in depth on it. They don’t read books about it because they don’t care and that’s fine. They don’t have to, but now it does affect them. So now they do have to care and now they are paying attention.

And that is what hurts Republicans. The most Republicans retain their power. When the public’s not paying attention to what’s going on, you know, when it’s just, Oh, ho hum. Things are fine for me. I guess they’re fine for everybody then. Or the more selfish things are fine for me. So I don’t care how things are for everybody. But suddenly you have 61% of Americans, a majority of Americans who say, things are not fine for me. They’re not, I can’t pay my bills 61%. So suddenly they start paying attention and they see that Pelosi’s been working. They even see them in nutrient and Trump have been working. That’s a shock, but they see that Mitch McConnell has a singular focus. And that focus is to just put more conservative justices up there. They’re pissed off, they’re angry and they’re tired of it. But unfortunately those numbers only exist outside Kentucky. So Mitch, McConnell’s going to go back. He’s probably just going to not have as many of his friends around him as he does right now.