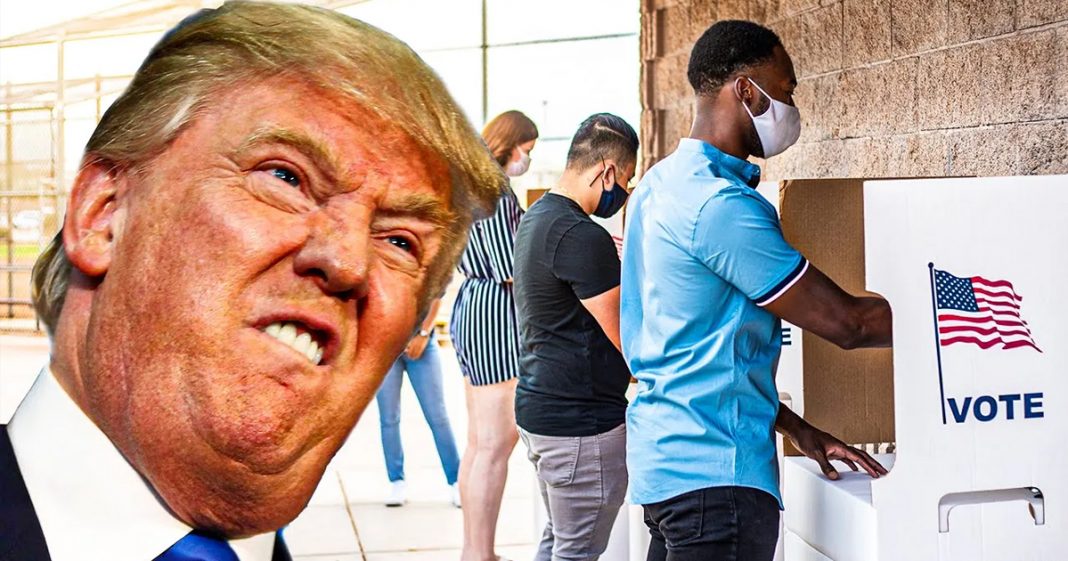 Millions of Americans have already voted in the 2020 election, a dramatic increase from the 75,000 who had voted by this point in the 2016 race. In spite of the tremendous efforts by Republicans to suppress the vote, people are doing whatever it takes to make it to the polls to vote them out. These early turnout numbers do not bode well for the Republican Party, as Ring of Fire’s Farron Cousins explains.

4 million is a greater margin than that by which Hillary Clinton won the popular vote in 2016, uh, projections right now say that we will have roughly based on the early voting numbers and the fact that this is still happening. Like there are still hundreds of people every day showing up at the early voting places in battleground States. I’m talking about Virginia, Wisconsin, Michigan people showing up early by the hundreds to vote. People are posting videos and photos on social media have lines wrapped around buildings because people want to get in an early vote. So projections at this point are that we could have 160 million people voting in this year’s election. 65% of the voting a public. That would be a record. That’d be a record for modern America, uh, a record for anyone who’s alives lifetime. Like we haven’t seen that anybody in our lifetime, 65%, Hey, it’d be great if it was, you know, a hundred percent, but you take what you can get more people are voting this year.

And what really gets me, what always gets me about this. Most of these P appeal, people, excuse me, are not showing up because they want a certain thing from their they’re showing up because they hate Donald Trump that much like that’s what this is. These people want this crazy man out of the white house. So bad that they’re not taking any chances. You know, they’re not saying I’ll risk it and go on election day. I know the lines are pretty like, no, they’re like, screw it. I’m going to go stand in line. In the beginning of October, still in the middle of a pandemic with my mask on socially distanced. And I’m going to wait two or three hours if I have to, but I’m going to vote. I’m gonna vote. And I’m going to make sure this man is out and I’m going to vote and make sure that Republicans know that in spite of their best efforts to suppress my vote, I got out there and I did it. And that is the important takeaway from all of this. It’s not just good. Stick it to Donald Trump. It’s not just maybe we can replace the Senate. It is fighting back against the suppression, because if we don’t do that, they’ve won. The suppression efforts will have been successful at that point. But if you get out there and you jump those hurdles that they have put up, then you win no matter what the outcome.