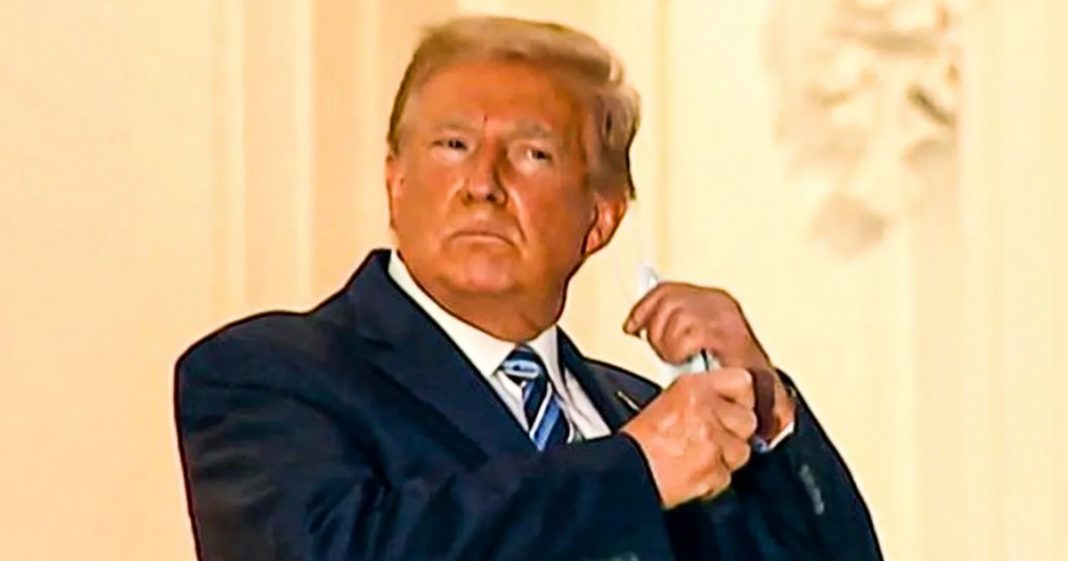 Even if you have access to the best healthcare on the planet, the Coronavirus cannot be defeated over a single weekend. And doctors are sounding the alarm bells for Donald Trump, warning him that he is on the same path that hundreds of thousands have take before him, and the worst is yet to come for his illness. In just a few days, we’ll find out if Trump is really over the sickness, or if he’s about to have a very dangerous relapse. Ring of Fire’s Farron Cousins discusses this.

Republicans might be celebrating Donald Trump right now, as some kind of Superman who was able to overcome his COVID-19 infection. And just really a couple of days, uh, might be a little premature in their celebrations. And that’s actually coming from doctors who spoke to Buzzfeed this week, who warned now to, you know, kind of paraphrase the worst is still probably yet to come for the president. And it’s interesting to see them say these things, because this is exactly what I had been saying for several days. And the doctors once again, reconfirmed it. And that is what they typically see with coronavirus patients is that they become symptomatic. They go through a few days of that. Sometimes three or four days up to a week, then things die down a little bit, which appears to be what has happened with the president right now. The die down can last the same amount of time, you know, five days to a week.

And then after that, you kind of get what is essentially the second wave of the virus through your system. In, in most cases, it doesn’t happen all the time, but the people who do end up, you know, rather symptomatic, uh, the first go round do typically have the second flare up. Trump was very symptomatic. He had his oxygen levels dropped twice and had to receive oxygen twice. That’s not a good sign. We all saw the videos of him standing on front of the white house, wincing, you know, look at his eyes, not as chest or his mouth. Look at these eyes. You see the pain in his eyes and those videos when he’s trying to breathe in. So yeah, the likelihood of him having a second flare up is tremendous. And that is what these doctors are warning. Cause here’s what happens in the second flare up.

It’s not just that the virus comes back with a vengeance. No, it’s that your immune system, which now knows how to fight the virus, your immune system flares up and that, that flare up of your own body, trying to fight this thing is what causes very severe respiratory distress and other distresses within the human body. Uh, essentially your immune system thinks it’s Superman and says, well, we’re going scorched earth here, fellas, let’s get this thing out of here because it came back. We know how to defeat it. So every white blood cell I got let’s go. A doctor would probably explain a little more eloquently than that, but that is basically what happens inside your own body. So you’re dealing with your body overreacting at that point to try to get rid of this thing. And that is why we see a lot of people.

A lot of the reported deaths from this come as a shock to people come as a shock to their families because they say, well, he was walking around. They were, they were eating dinner with us last night. They seemed fine. And then they went to bed and never woke up. Read the stories. They’re heartbreaking. They’re, they’re, they’re, it’s hard to breed them. That truly is. But you see that scenario play out so many times folks, you really and truly do so again, maybe we should still listen to the medical professionals. Maybe we shouldn’t be listening to the guy who’s told more than 20,000 lies since becoming president. The guy who downplayed this from the beginning, tried to suppress data up data, change data, because it didn’t fit his narrative. Maybe we shouldn’t take his word for it. And maybe we should listen to the doctors that have been dealing with COVID deaths every day for the last six months. I don’t know about you, but I think I’m going to listen to the doctors instead of the guy who literally can’t stop himself from lying.