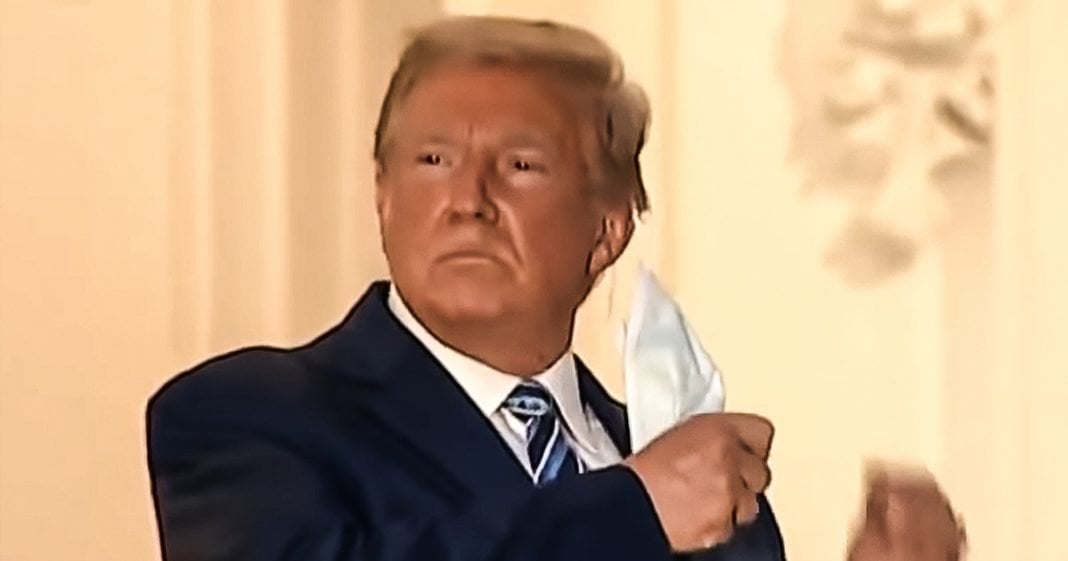 Donald Trump’s claims that Americans shouldn’t cower in fear of the Coronavirus will absolutely cause people to get this virus who otherwise would not have done so. He is being reckless and careless, and Republicans are cheering him on every step of the way. Ring of Fire’s Farron Cousins explains what’s happening.

So in case you haven’t been paying attention yesterday evening, Donald Trump was released from Walter Reed medical center, uh, flown by the helicopter back to the white house. He walked up the steps immediately took off his mask. Cause that’s exactly what we want to covert positive people to do gave some poses because they were compiling a propaganda ad, uh, which was released shortly thereafter. And he also gave an address, a very brief address because as we could see from all the video footage, he was struggling to breathe every time the man inhaled, you could see in his eyes that it was hurting him. But nevertheless, he gave an address and said, Hey, don’t let fear rule your life. Don’t be afraid of COVID a similar sentiment as to what he had said on Twitter. Not long before that. So he is out there right now, telling Americans don’t be afraid of this.

And your message is absolutely going to get people killed that image of you almost rip it off that face mask that sends a message to people that you don’t need. This thing you brought that virus back into a white house. That’s already been ravaged by it. I think the last count was you have at least 17, 17 white house staffers who have tested positive, possibly 19, and you’re sitting there or, or walking. They’re really bringing it back in with you. So the question I have is what happens to somebody like Trump. Who’s trying to get over the virus when they are constantly being exposed to other people who have the virus. So they’re still getting viral loads into their body. As their body’s trying to fight off, what’s already inside and replicating. It’s going to be a lot harder to do when you have the introduction of new viruses into the human body on a near constant basis, by going back to the white house, but we know why he did this.

And it’s reflected in the memes and talking points of the crazy people on the right, the keep America great. 2020 Facebook group actually released the photograph last night, a photo-shopped x-ray of Donald Trump, allegedly that also had the Superman S on it. Uh, Matt Gates said, Trump’s not going to have to recover from COVID COVID is going to have to recover from Trump. They look at this man as if he is truly a godlike character, a superhero, why this geriatric obese individual who’s a total fraud who doesn’t have anywhere near the success that he wants people to think he has. The only thing he’s good at is convincing stupid people, that he is the ideal male form in both body and personality. That’s nuts, but not as nuts as what he did yesterday. Let’s be real for just a moment. If you watch those videos, if you watch Donald Trump standing outside on that veranda, here’s what you saw him do.

He can’t breathe. The president can’t breathe and he hasn’t even hit the bad part of this. Yet. He left the hospital early. I guarantee you against the wishes of medical professionals and medical professionals who spoke to other media outlets. Yesterday all said the same thing that I have been saying since he went to the hospital and that is you don’t really get like hit hit with this till after about a week and a half to two weeks. That’s when the problem period begins. And not only because of the virus, but because that’s when your immune system shoots into overdrive and essentially overreacts to the virus, and that has what has caused or what has caused, excuse me, a lot of damage and individuals who have survived this, it has also caused a lot of damaged and cause people to not survive this Donald Trump is nowhere near out of the woods.

He’s barely even into the woods at this point. So what happens next? What happens when he has the relapse? What happens when he hits that danger point? And the virus comes back in, it’s resistant to the room, desert veer and all the other experimental drugs they’ve treated him with because they gave them to him too soon. What then? What are they going to treat them with at that point? How’s that going to look to his followers? Are they still going to think that he’s a Superman? Are they still going to think that the whole thing’s a hoax time will tell, but what he did yesterday was incredibly irresponsible and dangerous. And eventually based on what we’ve seen so far with what’s happening inside the white house, very likely to get somebody killed.