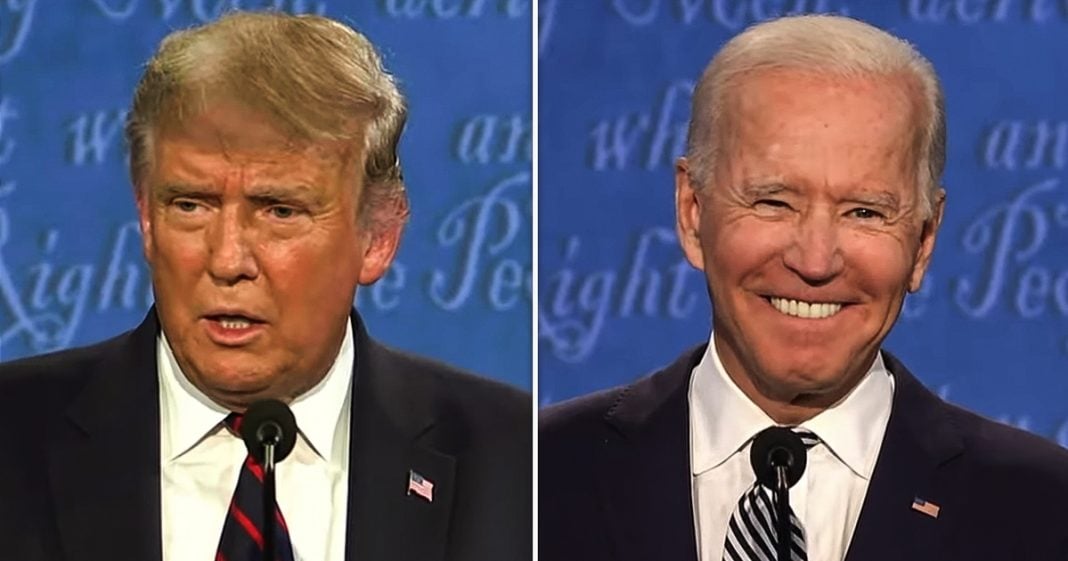 Donald Trump’s campaign is in absolute shambles, and his hospitalization isn’t doing him any favors. He is watching from the sidelines as undecided voters swing over to Joe Biden following last week’s debate, and he can’t go out and hold any of his rallies because of his diagnosis. But the truth is that even without the virus, Trump would be in a freefall. The debate last week – which may be the only debate – helped seal the deal for many voters, as Ring of Fire’s Farron Cousins explains.

So more and more polls are starting to pour in, uh, following last week’s presidential debate. These things take a little bit of time, you know, you do not want to rush them. Of course, we get the immediate snap reaction polls after the debate, the snap reactions typically do not hold, but in this case, they’re actually holding the polls taken immediately following the debate. Uh, the quick online polls showed that most people agreed. Donald Trump lost Joe Biden looked much better. He technically won. Uh, even though most people also agreed. The whole thing was absolutely horrible to watch. And they’re not really happy with either person, but Joe Biden came out as the clear Victor. And so now that a week has passed, we’ve got real polls taken after people, you know, their gut reaction is gone. You know, they’ve had some time to digest it and think about it. And Joe Biden is killing it. Uh, yesterday we talked about the poll that had come out over the weekend that showed them up by 14 points and how he was winning essentially with every demographic at this point.

Well, more polls have come out and it’s not just that Joe Biden is winning it’s that Joe Biden managed to convince according to the polling data, a lot of undecided voters, that he is the better pick. And here’s why, according to the polls, the people cited things like temperament. Mmm. Overall posturing, you know, the way he handled himself, not talking about physical posture, the way he handled himself, the way he approached the issues, his calmness, things like that actually helped these undecided voters to say, you know what? Trump’s a little unhinged. And that is also a word they use to describe him in these polls. Trump’s a little unhinged, this guy, isn’t, I’m tired of the crazy. I’m going to go with the normal regular guy. Okay?

The undecided voters at this point, folks, those are the only people these candidates are talking to. When you see those ads on your TV, when you see them at the debates, they’re not talking to us, Joe Biden is not sending me any kind of message with his ads or with his words or anything like that. Other than I’m probably not all that welcome me and my ideas in the democratic party, he made that clear to progressive stirring the debate. But other than that, everything he says is for the undecided people, Democrats, you know, from the far left to the middle left, most of us are already voting for Biden. Some of them decided Nazi, whatever, same thing with the Republicans, the middle, right? And the far right. Trump’s got them, or they’re not voting at all the undecided people that kind of sit in between those two things. Those, the people that really matter at this point, I’m not saying the rest of us don’t matter, but you know what I’m saying, in terms of what the candidates want right now, we don’t matter. They have us, or they don’t have us and they’re not going to swing us. The people who didn’t make up their minds yet. Those are the important folks. And according to the polling data, they are swinging heavily towards Joe Biden right now. So what happened?

Okay. That was just one debate. We got two more. Maybe, maybe If Trump is not fully recovered from his COVID-19 diagnosis, we might not have two more debates. So if we do not have any more debates Biden, one Biden it’s over this selection is over. And Joe Biden is the next president of the United States. If we have more debates, we’re going to go into it. Basically the same way we went into the first one, Joe Biden has everything to lose. Trump has everything to gain, but Trump also thinks he won the first debate. Uh, why White house staffers and campaign staffers. Aren’t able to convince him that his style wasn’t very good in that people didn’t like it. So we would likely be looking at a second and third debate, assuming they happen. That’s a repeat of the first one, except Biden would actually take what he learned and apply it. Whereas Trump will not either way Feeling optimistic again, that Trump is going to be out of office cause these new polls and we’re getting more and more coming out, you know, every day or so. And none of them have any good news for Trump and all of them right now with less than a month ago, show Joe Biden killing it in an absolute landslide.