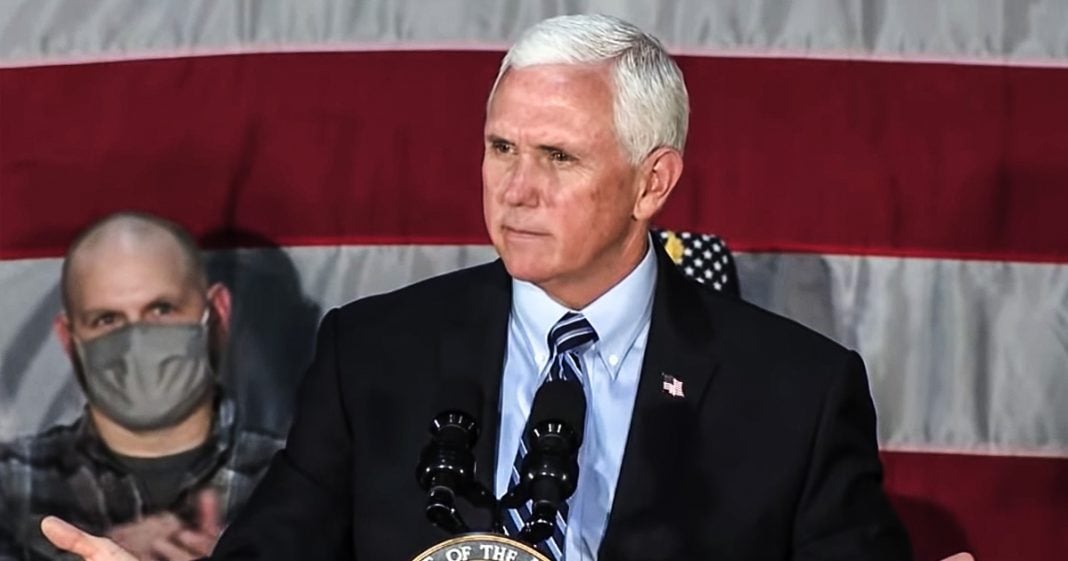 Donald Trump is sidelined with the Coronavirus, so Vice President Mike Pence is having to go out into the world and make things worse in his absence. Pence has announced that he is going to continue actively campaigning, which includes traveling and possibly even holding rallies, as he virus continues to ravage the country. Ring of Fire’s Farron Cousins discusses this utter contempt for human life that the Trump administration is displaying.

Donald Trump might be sidelined at the moment, obviously because of his COVID-19 diagnosis and his treatment and recovery of that. But vice president, Mike Pence tested negative, nothing wrong with him. Totally healthy and ready to go. And he is going to take over, I guess, Trump’s slot of going out there and making sure the virus continues to spread across the nation. Over the weekend, it was announced that Mike Pence would essentially be taking Donald Trump’s place, uh, as the one going out and about around America and campaigning. Now that statement that he is going to be the one going out and competing, uh, campaigning tends to imply that it’s going to be Mike Pence, holding rallies instead of Donald Trump, or at the very least meeting with voters meeting with donors. And that includes an event that is supposed to take place this coming Thursday, where there will be no social distancing mask policies are likely not going to be enforced.

So again, this isn’t Mike Pence necessarily taking over as the campaigner of the Trump reelection campaign. This is Mike Pence taking over as the guy who’s going to go out there and spread the virus further because even if he doesn’t have it personally, he is going to crowd bunches of people together, which the CDC says, please stop doing. And these going to create these super spreader events much like the Amy Coney Barrett, a nomination ceremony was at the white house. This administration, both Trump and Pence are borderline criminally incompetent here. I think that’s the best word. It’s not just criminal negligence. It is criminal incompetence.

They know what they’re doing, but they don’t care. That’s the negligent part. They don’t have the capacity to fully comprehend how dangerous this is and that’s the incompetent part. But there’s also another side of this too, with Trump currently being sidelined with the virus and this virus typically taking weeks to make its way through the human body. You know, uh, Donald Trump be in the hospital for four days. Okay, great. You’re you’re not free of the virus after four days. You’re not free of the virus after seven days. Typically it takes people many, many weeks to be completely free of it. And sometimes it even takes more weeks after that, before they feel 100%. Again, it will be past the election before Donald Trump is Trump again, I guess is the only way to say it. Um, he’s not going to be back to 100% before the election at all.

And so Mike Pence as the vice president is not only being irresponsible by helping spread the virus by taking over the events that Trump was supposed to be doing. But he’s also the vice president. He’s the one, you know, the job that they say is a quote heartbeat away. You actually should be protecting yourself because there’s a better chance than at any other point in your vice presidency that, that you may have to step up and, and assume a certain role, but you’re not doing it. Cause the guy in charge your boss, Donald wants you to go out there instead and put yourself in danger, which, Hey, you do that. And then something happens to both you and Trump almost simultaneously the Nancy Pelosi becomes president. I’m sure that’s what Republicans would absolutely love, right? No. So if that’s thought, if that thought scares you Republicans maybe send a message to Trump and Mike Pence, Hey, probably be a lot smarter if you just had Pence stay home for a couple of weeks at this point, not saying that, you know, I want them to remain as the administration in power. But what I am saying is that there are actually constitutional mechanisms in place that could come into play. And that’s why Mike Pence needs to be a little bit smarter than he’s currently being. I don’t think that’s possible for him, but that’s kind of what the constitution says he needs to be doing.