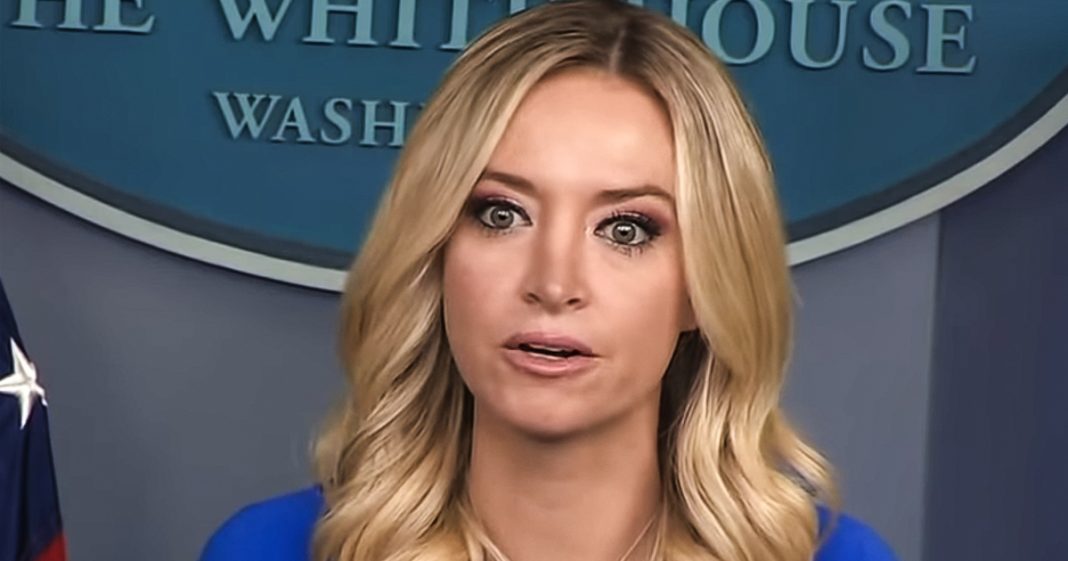 White House Press Secretary Kayleigh McEnany got a bit of instant karma on Monday. First, she announced that the White House would absolutely NOT be releasing the total number of infected individuals from Trump’s staff to the public. Shortly after this, she had to sheepishly release a statement saying that she has now tested positive for the virus. The White House is officially diseased, in more ways than one, as Ring of Fire’s Farron Cousins explains.

On Monday, a white house, press secretary, Kayleigh McEnany received a bit of what you would call instant karma. See, early on, on Monday, Kayleigh McEnany told the press that the white house was essentially going to be covering up the total number of people from the administration that received positive diagnoses of COVID-19. They just, they weren’t going to tell us they were going to keep those numbers hidden. And then wouldn’t, you know what the instant karma immediately kicks in and McEnany is forced to tell everybody shortly after she made that announcement, that she just received a positive diagnosis of COVID 19. So just moments really in the span of this administration, everything’s just a few moments before we move on a moments after she says, Hey, we’re going to be involved in a massive coverup of how many people are actually sick. She’s forced to come out due to her job and being in front of people and admit, ah, shoot, I got the dead, got the thing.

Now in our announcement, she said she’s asymptomatic. Um, but they also had originally said that about Trump. And he had said that about several other people who now say they are symptomatic. So we can’t believe a word she says, especially because her announcement Monday morning was that they were going to lie to us, lies of omission about what was happening. And then she comes out and says, why actually I have it. I’m totally fine though. She swears here’s the horrible thing about this. Kayleigh McEnany actually has a newborn at home. That’s horrifying. And that to me is kind of the moral, not the moral of the story, but it shows you where her priorities lie. First and foremost, she still gave a press conference after receiving her positive diagnosis, but before announcing her positive diagnosis. So she had exposed members of the press because she wasn’t wearing a mask.

She wasn’t socially distanced. And actually I take that back. We’re not a hundred percent sure if she knew before or after that. Uh, so maybe she didn’t know, maybe she did know, but she still helped to expose more people to this. And due to her inability to stand up, apparently for her own family, she is now exposed her newborn child to this virus. That’s Trump’s negligence. That’s the negligence of this entire administration with that super spreader event where they announced that Amy Coney Barrett was going to be their Supreme court nominee. All of them, they have now endangered the lives of their family members. They have endangered the lives of their friends and anyone else they’ve come in contact with ever since that event. And again, this is not something I would wish on. Anyone caring for a newborn at all, by any stretch of the imagination.

I don’t care how evil they are. And I know McEnany is absolutely evil story kind of changes a bit when you hear the, what, she’s, what she has at home. That’s that’s not okay, but she did this to herself. She made that decision. She made the decision to put her family at risk to suck up to Donald Trump. I hope nothing happens to that child. I hope nothing happens to the child’s mother, but by God, these Republicans got to wake up. This isn’t a game. This isn’t a cold. This isn’t a flu. This isn’t something that are crap. I got the thing I got to go, ah, this is deadly. This is life changing. Not just for the individual that has it, but it changed the lives of everybody in this country. Right now. We don’t know what the new normal is going to finally settle on, but we know it’s not going to be what it used to be, but Republicans like McEnany and everybody else in this administration are still trying to act like it’s not real.

I mean, even after this man happened, after everybody in the white house started announcing, Hey, I got it. I got one too. They still said, you know what? We’re not going to require masks. We’re going to encourage it. But if you don’t want to, you don’t have to. They can’t even stand up for their own staffers for fear of pissing off the crazy anti mask people in this country, this is pathetic. Vote them out, vote them out because these people are too insane to hold any kind of positions of powers. They’re so desperate for approval that they’re willing to put their own children and families at risk. And that is exactly what Kayleigh McEnany did.