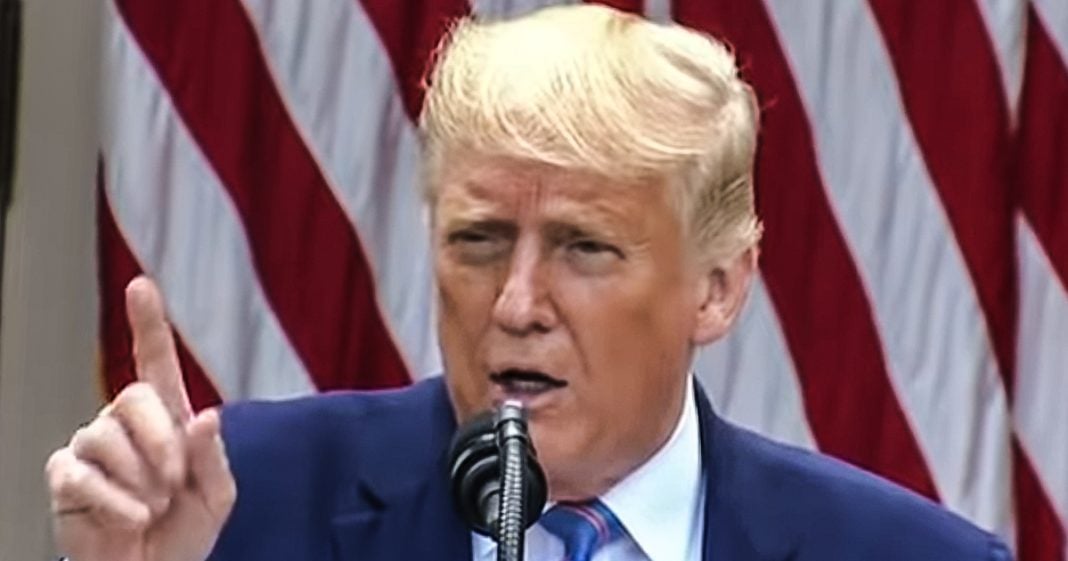 Donald Trump has been exposing people around him to the Coronavirus even after he received his positive diagnosis for COVID-19. First, it was donors at a fundraiser last week, then it was Secret Service agents during his little joyride to wave at his fans. The President is reckless and dangerous, and everyone around him is absolutely furious about the way he is acting. Ring of Fire’s Farron Cousins discusses this.

While most Americans were shocked to hear the news last week that Donald Trump tested positive for COVID-19. A lot of us also thought that sounds very predictable because of the way he’s been. So you either had the shock or either had the, yeah, that’s not surprising, honestly shocked. He didn’t get it sooner, but there’s actually a couple groups of people who reacted with pure anger and sheer panic over the diagnosis. And these people happen to be wealthy Republican donors and members of Donald Trump’s own staff. Uh, after the diagnosis was unveiled Friday morning, you had about a hundred high profile, big money, Republican donors panicking, according to reports because they had just spent the night before with Donald Trump at a fundraiser about a hundred of them, you know, no social distancing, probably not many masks in the room. We don’t know because you know, nobody gets to see what happens behind the closed doors, but they were according to reports panicking because they had just been with him 12 hours before he says, by the way, tested positive.

And then they found out on Saturday that he knew he didn’t only learn about it on Friday morning. He knew when he walked into that fundraiser that he had it and intentionally exposed every one of them to it. I don’t think he maliciously said, ha, I’m going to get these people. It was more of, yeah, I’ve got it. I don’t care. So whatever I need their money, I’m going to put their lives in danger. I’m going to continue to risk my life, whatever, whatever happens happens. So that’s the first group. And then of course we have the second group, which are the people who work in the white house, who it seems every 12 hours or so we’re fighting a new one that says, Hey, I’ve tested positive Republicans. You know, all over the country who were there at the Amy Coney Barrett super spreader event.

They’re saying, yeah, I have it now. I got it. I am positive. I took it back to my family now. So there’s another group. That’s a little angry, not necessarily a Trump. They’re just angry that they’ve got it, that they were at this event or they’re just trying to play it. Cool. And the other group is actually furious. According to reports out on Monday, secret service agents. Now they’re not mad because you know, they, weren’t one of the people that Trump duped, they actually don’t have a choice. They have to do these things. And what they’re pissed off about is Donald Trump’s little, Sunday joy ride, where he went around, waving at the people, showing him support all around the hospital, federal. Um, And to clarify, at the time I did a quick video on that. I said Trump was not wearing a mask. He was wearing a mask as were the drivers who were secret service agents, presumably. And so yes, that reduces the chance of transmission, but it doesn’t eliminate. There is no way to eliminate the chance of transmission. It’s kind of like birth control.

You mean 97% effective, 99% effective, which is what if two people are wearing mastery about a 99% efficacy, but that’s still not a hundred. And the little joy ride that he took was not necessary. You know, I’ve seen people say, well, relax, idiots. He had to fly with secret service to the hospital and they were exposed then. So relaxed. Yeah, that was kind of necessary. You had to get the president to the hospital. So of course that is a calculated risk. But when he says, you know what, I’m bored of being cooped up. I’ve seen videos of people. I want to wave to them. I need to go stroke. My ego. Maybe I’m doing this to help the stock market. Then it’s not a risk. That’s worth it. It’s not a risk that these individuals, the secret service agents had to take. So they’re pissed off, off about that. So he’s pissed off the secret service. He’s pissed off his staffers. He’s pissed off his donors. Who’s left. You got left less than a month to go before the election pissing off everybody around you, including the people you need money from. Probably not a smart idea.