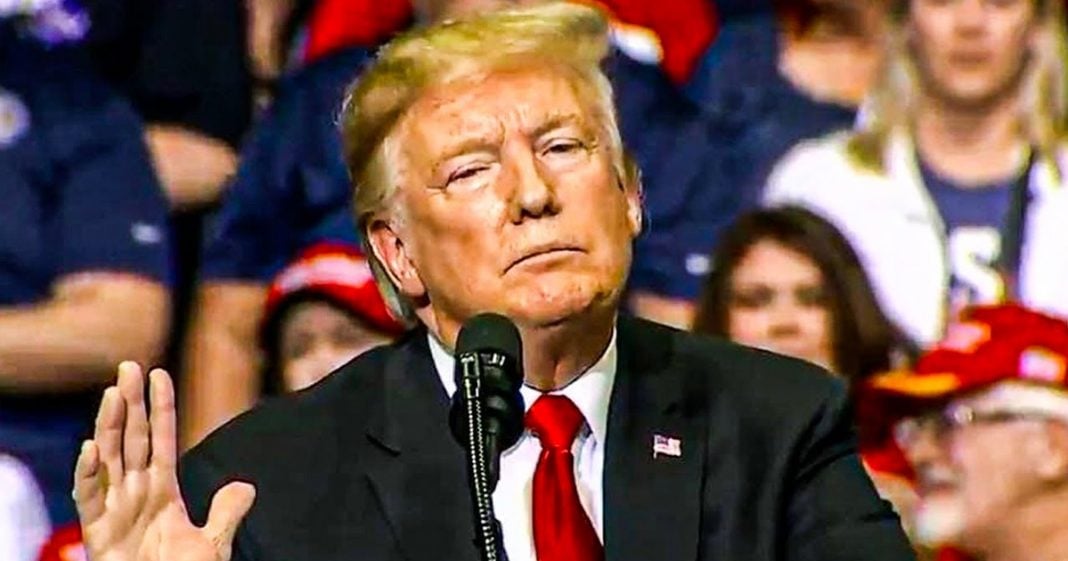 It was only natural that conspiracy theories would arise from Donald Trump’s trip to the hospital, but the outright denial by non-conspiracy theorists is a little surprising. Many Trump supporters are still laboring under the delusion that the entire pandemic is a hoax, and that the virus isn’t going to infect them or anyone else. There is no cure for this level of stupid, as Ring of Fire’s Farron Cousins explains.

Even as Donald Trump sat in a hospital this weekend, uh, suffering and being treated for COVID-19 infection, his supporters across the country, including some of those standing outside of Walter Reed medical center still told members of the press that they think the virus is a hoax. According to a report this weekend, over the guardian from the guardian, excuse me. Yeah. They interviewed Trump supporters who still, even with the president of the hospital, told them, I just don’t think it’s all real. I still think it’s a hoax. I still think masks don’t work. I still think we don’t need social distancing. And it wasn’t just the everyday average Trump supporter out there in middle America. You had members of the Republican party going on television. People like Matt Gates, my idiot, congressmen, who went on multiple different media outlets to say, this is all proof that mass don’t work. That social distancing doesn’t work. And he’s not the only one who said that they’re still out there trying to convince us that. Yeah. Even though our guy is, you know, hopefully he pulls through, we still think it’s not real.

You know that that’s the worst of the worst. The people who look at the situation and still say, no, no, that’s not real. I don’t believe it. I don’t buy it. Nope. Not happening. I’m not even gonna look at you because you’re lying. That’s what the Trump supporters are doing right now. Uh, so that’s the most extreme of it. And it’s really sad that that is even more extreme than some of the crazy Q Anon level conspiracy theories that have arisen from this. Some of the theories out there right now from the Q and on types are either that Trump was intentionally infected, possibly at the debate. You have had a democratic or not democratic Republican, excuse me, running for Congress, actually running for Congress who have tried to put out there in the ether that, Hmm, isn’t it weird that this isn’t effecting any Democrats.

And it’s only going to all the Republicans know when you have one party that openly goes on TV and says, it’s a hoax or mass don’t work or that this is why social. No, it’s not surprising at all. You have one party that’s made up entirely of morons and another party that says, maybe we should trust people that are smarter than us. They’re there there’s really no shock there. The shock is that you’re shocked. And then of course you have the actual Q Anon people who think that Trump done Navid. And it’s not just like some of the folks on the left who are spreading conspiracy theories. And these are nobody’s, it’s not actual people of substance people of note on the left, spreading conspiracies. Their thing is that Trump doesn’t have it. He’s doing it for sympathy. Q Anon thinks Trump doesn’t have it at all, but they have moved him to the hospital to keep him safe from the deep state. Right.

You can’t let it All these deep Staters. They were getting to them. They were closing in on him. So his advisors, right? Don’t we’re going to take you out. We’re gonna put you in the hospital, how they can’t get you here because the hospital somehow is more secure than the white house, the most secure place in the United States, probably. Sure. Um, so a lot of nuts out there, let’s just put it that way. A lot of nuts. Folks, this isn’t a hoax. This isn’t a conspiracy. The president is sick. He’s sick because he didn’t listen. He sick because he decided to have the little, you know, public ceremony for his Supreme court nominee. The Republican showed up. The Democrats did not. That is why the Republicans have it. And the Democrats do not. It is most likely that that event was the quote super spreader event. And that is why the situation that we’re watching unfold is currently unfolding. Any questions? Good.