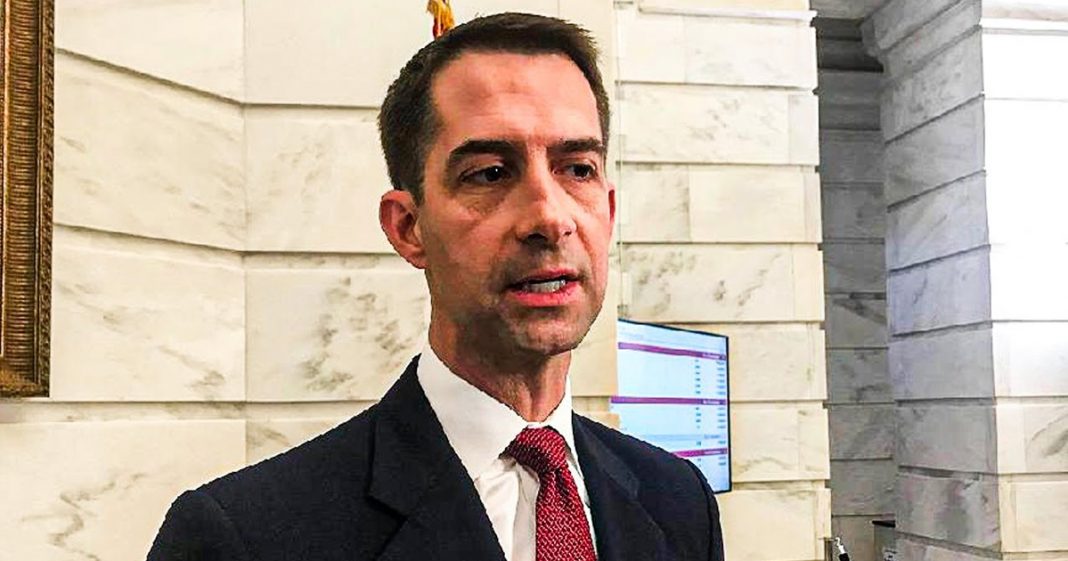 Republican Senator Tom Cotton told Fox News host Maria Bartiromo that the Republican senators who are currently in isolation after failing to adhere to safety measures and subsequently contracting COVID-19 could be “wheeled in” to case their vote for Trump’s Supreme Court nominee Amy Coney Barrett. This is highly irresponsible, considering the fact that this is a highly contagious disease that could simply be waited out. Ring of Fire’s Farron Cousins explains the urgency for Republicans and why they are willing to risk everyone’s health to get Coney Barrett confirmed.

Republican Senator Tom cotton insisted on Sunday morning during an interview with Fox news is Maria Bartiromo that nothing was going to stop the confirmation process of Donald Trump’s Supreme court nominee. Judge Amy Coney Barrett. Absolutely nothing. Even though you have several members of the judiciary committees, every row, several Republicans from the Senate judiciary committee, uh, who have now tested positive for COVID-19. They can’t even come into work, but don’t worry. Tom cotton says if we have to, we’re just going to wheel them in there so that they can vote. So we can get this done. Take a look at what Tom cotton had to say about his sick colleagues here it is.

Maria Bartiromo:                  Yeah, I want to just point out that we showed video of the event with Amy Barrett, not everybody at the event has contracted COVID-19, obviously. But three senators have and that’s why I mentioned that event. But tell me about the proceedings. You say you are confident that you will be able to, in fact, have the nomination hearings for judge Barrett. You think this will not impact the schedule or the agenda, sir?

Tom Cotton:                  No doubt about it, Maria. Several of the senators who are in isolation right now would come out of isolation before those hearings begin. But the senate judiciary committee has also conducted 20 hearings this year that have either been in part or whole, in virtual. Many senate democrats who are now saying we couldn’t possibly do a virtual hearing or demanding throughout this year, going back to march, that all committees be conducted over Zoom or WebX or some other kind of virtual hearing. So the hearing is going to go forward, no doubt, in my mind, starting a week from tomorrow, Maria. And then on the senate floor later this month, first off, I think every senator who’s current tested positive or is in isolation will be back to work under normal conditions. As other senators have been as well, like Rand Paul or Tim Kaine.

Sure. Yeah. We’ve we’ve had to wheel people into the Senate before we’ve had a wheel people under the house to take votes people on their deathbeds essentially, but see this big difference. Um, those things didn’t happen during a pandemic. Um, those weren’t people who had highly infectious diseases that could kill other people in the chamber. This, this isn’t a similar situation. You’re comparing apples to oranges here, but not only that, the fact that you’re like, Oh, screw it. No hell no, I don’t care if you’re sick. I don’t care. If you’re in the hospital, I’m going to wheel your ass into the Senate and you are going to vote. Dammit.

Why didn’t you have this same resolve when your leader Mitch McConnell was sitting on those relief bills for American workers, right? Why didn’t you say we don’t care. We’re going to throw on our mass. We’re going to come in and vote. Oh. And if we get sick with that, we’re going to wheel in there so we can help the American public has that is after all what we were elected to do. Right? Tom? No. No, you didn’t care about any of that. You weren’t all gung ho about bringing people in to vote for that, but a Supreme court seat. Oh, Oh, we’re doing that. I don’t care if you’ve got one breath left in you and I have to come in and do a weekend at Bernie’s and put my arm through your jacket and sign your name on it. I’m doing it.

There’s a reason by the way, because think about this too. Okay. You got members of the judiciary committee. They’ve got COVID. You do not have the quorum anymore. This could fail, but you’re going to push through with it anyway, because it’s urgent, but it’s not actually urgent. If you could do this after the election, you could wait for these people to quarantine for four months. And, and, and the, the, the idiocy, by the way, the ignorance of this man to say, Oh, a week or two, yeah. That we find they be back in, they get through it. You realize most people, I don’t know if it’s most, but a lot of the people who die from COVID die in week three. Have you known that? I’ve been reading up a lot over the last few months on the science of this and how it actually works in the body the first week, typically for a lot of people is when you start showing symptoms sometimes mild or sometimes, you know, a little bit more severe second week, the symptoms actually start going away. Third week is usually the virus comes back with a bit of a vengeance and your immune system reacts even more than it did in the first wave of it.

And that’s what kills a lot of people. That’s why you see all these stories of somebody saying, or, you know, Oh, well, no, they were up and around. They were, they were doing fine. They were doing great. I thought they’d gotten over it. And then boom, they dropped dead. That’s how this thing works. And Tom cotton is sitting there acting like these elderly men, these elderly out of shape men on the judiciary committee. Ah, they’re going to be fine. And we’ll be back in two weeks. No. Um, it usually takes, give, or take three to six weeks for this thing to get through three to six weeks folks.

This is not something that, Oh, a couple of days in the hospital, you’re going to be okay. Oh, you had it. But now, you know, it’s been a week. You’re fine. You’re good. No, you’re not out of the woods. And at this point it doesn’t even look like you’re out of the woods. Once your body finally gets rid of the last bit of the virus, because the damage that it causes through you and Tom cotton is so hell bent on getting Amy Coney Barrett confirmed before the election, because he wants to make sure she’s there to swing it. If we need her, if they need her. Sorry, doesn’t ever mean to say we there that’s, that’s what this is about. He could wait. They could wait. Even if Trump loses the election, you still have a very long lame duck period, almost two full months, by the way, to get her through.

So you could easily wait for these people to go through their six weeks, just in case six weeks of the virus, be fine, come back and vote on it and then go off and have a wonderful Christmas, even though Trump’s not going to be present anymore, but you want to get it done now so that she can be the person to swing the election. That’s what this is about. And that is why Tom cotton is willing to maybe even personally wheel these people in there so that they can vote to have this woman help circumvent democracy.