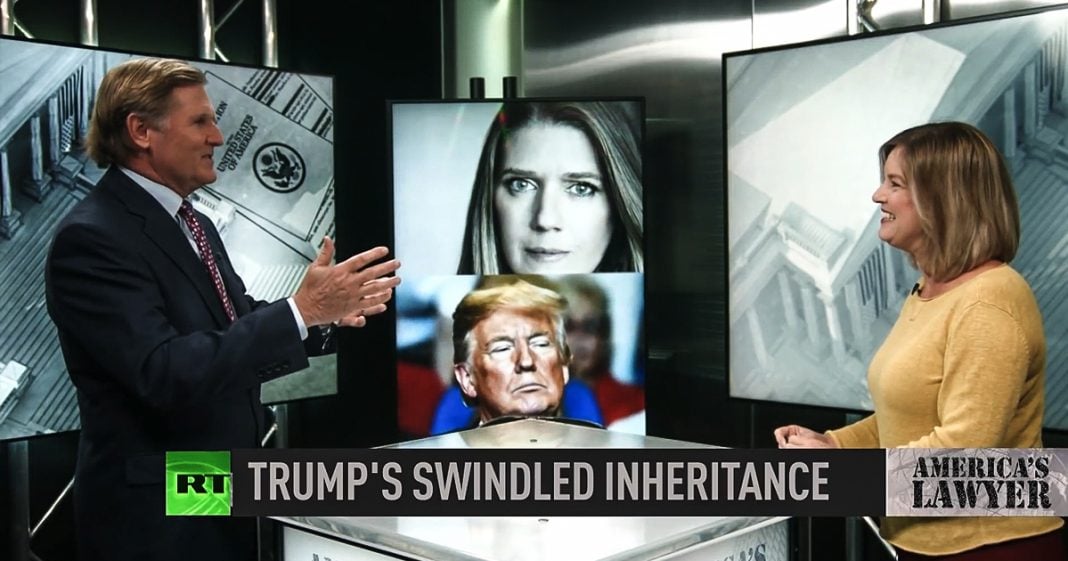 Via America’s Lawyer: President Trump’s niece is suing him for swindling her out of millions of dollars owned in her inheritance. Legal journalist Mollye Barrows joins Mike Papantonio to discuss.

Mike Papantonio:             As if dodging income taxes for years wasn’t enough for president Trump, now he’s being sued by his niece for fleecing her out of millions of dollars owed to her in inheritance. You know, pretty strong book, man. He just comes out the guy’s a fraud, not just, not just Trump.

Mollye Barrows:                Yes, it is. Well, it is interesting. I mean, certainly the election’s right around the corner. It’s right on the heels of her book and it’s something she’s been hollering about for some time. I mean, going back to 1981, when her dad passed unexpectedly, she said that the family, her two uncles and her aunt got together and one of the uncles has since passed as well. And basically, you know, devalued her interest, she and her brother were young. They were teenagers. They didn’t know what they had. They misrepresented the value of what their inheritance was, siphoned funds away from her to others. And then as she became older, they used a family attorney as well, who has since passed. So she’s alleging all of these things in the lawsuit and said it basically, they defrauded her and her brother out of tens and millions of dollars. And they, and even threatened her to the point of like withdrawing health insurance, which is important because her brother had cerebral palsy. And so she said that that’s how they, you know, essentially forced her to do what they wanted to do, which was sign away.

Mike Papantonio:             They actually sound like villains in a bad Disney movie, don’t they.

Mike Papantonio:             Cruella de Vil, I mean, or worse. So, okay. So along with that, she, you know, she, she kind of targets, well, she does target the Donald and basically give me the list. I mean, if you’re to describe what she said about the Donald, most of the stuff we know. Has she told us anything we don’t know?

Mollye Barrows:                Nothing that we haven’t heard before. That basically that, that frauding people and lying is a way of life, that they jacked up the rent on low income houses, that they, he was a tax dodger, as you’ve seen in the recent times article that he basically made all of his money off brand and, and inflating his own image so that he could get investors to continue to invest in him, that it became about investing in the brand. But that he’s a narcissist and a liar and that the whole family’s like that. And that they learned it from the dad. Like I was saying earlier, I saw her weighing in on a piece on frontline where they were comparing Trump to Biden and their upbringing and their family relationships and the impact that those things had on them. And, you know, he has called her unstable, but she was a, as a clinical psychologist and she’s like, well, hey, pot calling the kettle black. I mean, you’re the unstable one.

Mike Papantonio:             Because when I heard that, I’m going okay, well, what are you talking about? She’s mentally unstable. No, she’s not mentally stable.

Mike Papantonio:             They’ve probably mediated it. They’ve sat down and tried to get something under control. They’ve tried to say, well, you know, do we really want to blow this whole thing up for the family? Is there anybody that’s in the family coming to her aid as far as you can see?

Mollye Barrows:                Not that I’ve heard, which I guess is why she secretly recorded her aunt, the judge, and even though the white house has criticized her for that move, no one has basically denied it. I mean, they’ll say, okay, it’s just bad blood. It’s just one family member saying something ugly about another. But I don’t think that they’re specifically denying some of the, you know, particulars.

Mike Papantonio:             And, and, and this scheme that she’s talking about is actually a scheme that you see sometimes in estate management kind of conflicts.

Mike Papantonio:             She’s a trustee. And so they manage the estate where they freeze somebody out so they can put more money in their pocket.

Mollye Barrows:                Yes. And she said that it basically all started back when the dad had, you know, Fred sr was getting alzheimer’s and that was when they moved in.

Mollye Barrows:                And then when her father suddenly passed away, it made it even easier because they already had control because the dad had alzheimer’s.