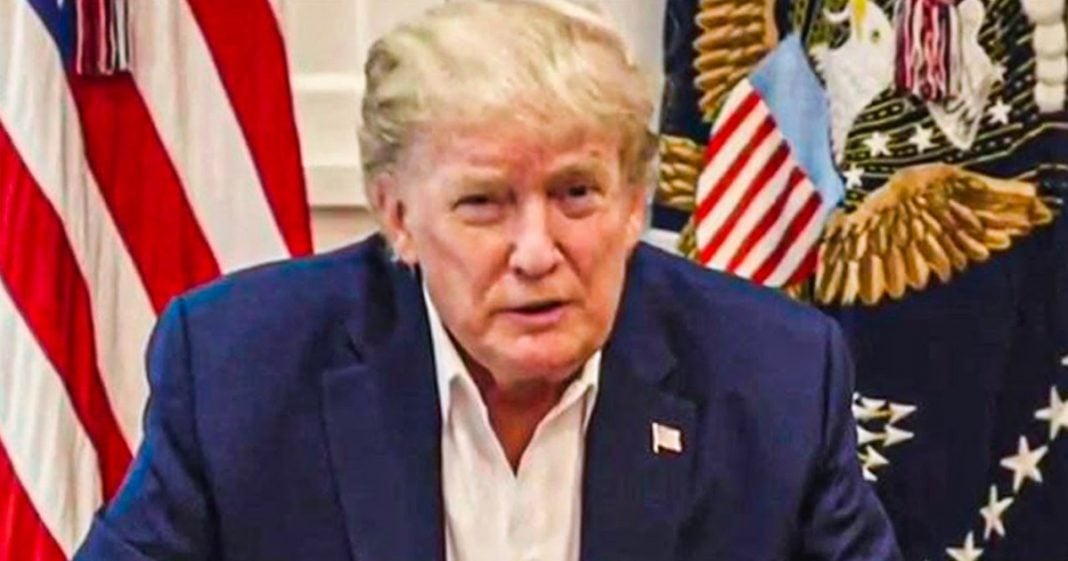 Donald Trump tweeted out a great big THANK YOU to his supporters who were gathered outside of Walter Reed hospital holding a vigil for him, but this only exacerbated his problems with the public. It turns out that the founder of the Proud Boys was helping to orchestrate the showing outside the hospital, and reports indicate that other members of the group that Trump failed to condemn were also present. Ring of Fire’s Farron Cousins discusses this.

With president Trump hospitalized over the weekend for treatment for his COVID-19 infection. A lot of Trump’s supporters took it upon themselves to go congregate outside the hospital. Most of them not wearing masks, all of them in very close quarters to show their support for the president and for various conservative political causes. Uh, if you’ve seen any of the footage, any of the pictures from over the weekend, there’s people out there holding their big Trump flags. There’s people out there holding their blue lives matter flags, all of it again in very close quarters and all of it very heavily orchestrated Donald Trump’s, uh, deputy chief of staff, white house, deputy chief of staff, Dan Scavino tweeted out photographs, videos of these Trump supporters outside of Walter Reed hospital. And then Donald Trump retweeted that on Sunday morning with a message. Thank you very much. Simple enough. People are out there supporting him, totally genuine people out there with their Trump flags, everybody again, all shouting their love and praise and admiration for Donald Trump.

Trump retweeting it saying thank you all very much. And what he inadvertently did there was retweet and thank the proud boys, the group that he got in so much trouble for refusing to actually condemn earlier in the week of the debate. He then thanked either because his deputy chief of staff Scavino didn’t know who these people were or he knew, and he wanted this to happen. See, here’s what’s going on. Folks turns out Gavin McInnes, the founder of the proud boys who’s allegedly no longer associated with them, helped orchestrate a lot of what we’re seeing outside of Walter Reed. This is not just genuine people coming because they care. These were people that were recruited and according to the Hill reporter, uh, which I believe is the group put together by the, uh, [inaudible] brothers. Um, but they still do some fairly decent reporting. Uh, they were able to find out that many proud boys were in fact in the crowds.

So Donald Trump tweeting out his appreciation and his thanks to these people for showing up. He was actually thanking the proud boys. Now that’s not to say that everybody out there was a proud boy, but based on what we know there, there were plenty of proud boys out there in that crowd waving their blue lives matter flags folks. There was nothing genuine about what took place outside of Walter Reed. This is what the white house was hoping. What happened. These cult-like followers of the president out there basically doing the same thing by the way that they think black lives matter, protesters should be run over for because they’re standing in the middle of the road, they’re walking out into the middle of a road. And if this had been in other areas of the country, you would legally have the right to run them over and you couldn’t be charged with murder for that, which is a horrible thing.

Anyway, you shouldn’t ever be thinking about running over protestors. But what I’m saying is that the president thanked the proud boys for their support, the people that we’re seeing out there outside of Walter Reed hospital, the ones we saw all weekend, this is not genuine. This is all heavily orchestrated much like the photo ops that the president is, is having inside of Walter Reed. None of this is real. It’s all smoke and mirrors. It’s all organized. It’s all orchestrated. And it is all designed to make you think that one, either Trump is doing a good job or two, that there’s legitimate people in this country who truly love him. Oh, there are. But they’re the cult like people, what we’re seeing in front of Walter Reed is not how the average person feels, but they want to give the appearance that it is to garner a little bit of sympathy for a president whose reelection campaign is currently going down in flames. That’s what all of this is about, but don’t let it, uh, you know, obvious skate the bigger picture here. And that is that the proud boys are absolutely involved in those outdoor, uh, you know, prayer sessions for Donald Trump.

They, you know, he wouldn’t condemn them earlier in the week. Did not actually come out and do it properly. And now he’s thanking them. That’s what happens. They saw, they saw the message he sent to them and they showed up and he thanked them. And that’s, what’s going to continue to happen until he straight up, comes out and says, proud boys. I do not want your support. I do not appreciate your support. Please go away. And if he doesn’t do that, they’re going to feel emboldened to continue showing up for him in whatever capacity it is. Luckily so far, what’s happened outside of Walter Reed. Totally nonviolent, right? So there’s nothing wrong with it. You’re able to do that. And there is not a problem with it. Other areas of the country may not be so lucky if, uh, the election doesn’t go Trump’s way in November. That’s something that law enforcement officials have actually been warned about. Something the department of Homeland security has already warned about. And that’s something that Donald Trump gave a dog whistle to for his proud boy followers this past Tuesday.