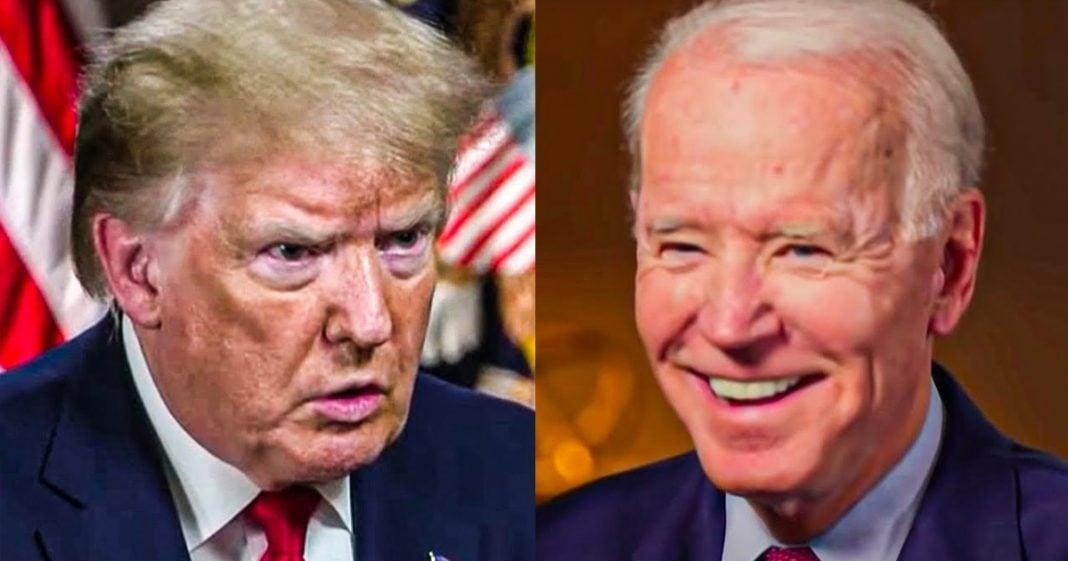 Donald Trump’s chances of winning reelection took a severe dive after last week’s debate, and the latest round of polling shows that Joe Biden has now opened up a 14-point lead over Trump. Biden is now leading with senior citizens and men over 50, leaving not a single demographic going in Trump’s favor. With under a month to go, it seems highly unlikely that Trump can turn things around, especially when he thinks he’s doing everything right. Ring of Fire’s Farron Cousins discusses this.

Last week’s presidential debate absolutely had an impact on this race. Not only did both candidates give a, you know, not great to put it mildly performance Trump’s was clearly, far, far worse than Joe Biden’s and his horrid performance has had a material effect on this race that according to pollsters is not something you usually see. There is rarely according to pollsters, this singular event that has such a massive impact on a political race, but they believe that last week’s debate and Trump’s horrendous performance is why in the latest poll from wall street journal, NBC news, Joe Biden has opened up a 14 point lead over Donald Trump. 53% of registered voters say it’s Biden 39% say they’re gonna vote for Trump. That is one of the largest margins we have ever had in at least all of my years, my over a decade and a half of covering politics here in the United States, we haven’t had that, that kind of gap has not existed.

It did not exist between Trump and Hillary. At this point, it did not exist between Obama and Romney or Obama and McCain or Bush and Kerry, or even Bush and Gore certainly didn’t exist in well, Clinton versus a Dole or Clinton Bush. This, this, this is unprecedented in the lives of a lot of Americans. We have not seen this kind of gap. Uh, and in fact, Biden has now pulled ahead. When senior citizens, there has been a double digit flip nationally of senior citizens going from Trump by double digits to Biden. By one point, Trump loses elections held today. Trump’s done and he’s done in a landslide. The likes of which, uh, has not been seen in modern, in the modern political era at all. It’s an absolute embarrassment to him. And here’s the fun part about all of this, you know, for months and my actually God, probably for about a year now, we’ve been talking about polls and every one of them I have had to say, listen, there’s still plenty of time.

There’s two, you know, there’s there’s six months left. I a hell. I think at one point there was nine months left. There’s six months. There’s three months. There’s less than one month. These poles do matter. Now these are real numbers we’re looking at and talking about this is what the public sees. And the other great thing about it though, excuse me. If the pollsters are correct. And it is that the debate is the singular factor that gave Biden a 14 point swing in his favor. That coupled with the fact that Donald Trump insists that he won and refuses to change the course, that means that Biden’s lead at this point would only get larger unless Biden, self sabotages. Now I do not agree with the Biden campaign’s decision to pull their negative ads. At the same time, I’ve spent a lot of time watching TV and even honestly playing apps, uh, on my phone playing games on my phone.

And I have seen a lot of negative Biden ads against Donald Trump. So I don’t know if, if they were legit pulling their negative ads or if it’s just a slow process, I’m still seeing them. And I love it. Keep it up. Don’t pull them. Trump said they’re not pulling theirs so you don’t pull yours. The other thing that could be an X factor here is Trump’s COVID diagnosis in his hospital stay. Is that going to endear him to the public? Are they going to say, well, Oh man, I feel bad for him. He had COVID honestly, I don’t think so. I know it happened in the UK. It happened Boris Johnson. Oh, and they’re warning. Hey, look, what happened to us? Look what happened to us. Sure, sure. It’s not the same situation though. We have a president who already was not trusted by the public to handle the pandemic.

He has lied to us, not only about how bad the pandemic is. He has lied to us about the efficacy of certain treatments and preventative measures like masks. And hydroxychloroquine he swears hydroxychloroquine queen works studies show. It does not. He swears that masks are not important. Studies show. They are. They lied to us about the timeline of his infection. He knew as early as last Wednesday, he still intentionally exposed himself to other people. The donors are pissed. Yeah. This isn’t going to be a repeat of Johnson in the UK with it. This is going to hurt him, especially when the public already trusted Biden over Trump on this issue again by double digits, Biden is now also leading with men over 50 in this new poll, based on what I have seen going through the individual numbers. It does not appear at this point that Donald Trump is winning with any demographic in the country. That’s unprecedented. And what’s even more unprecedented is that none of it has to do with how awesome Joe Biden is. It’s because everybody just hates Donald Trump that much.