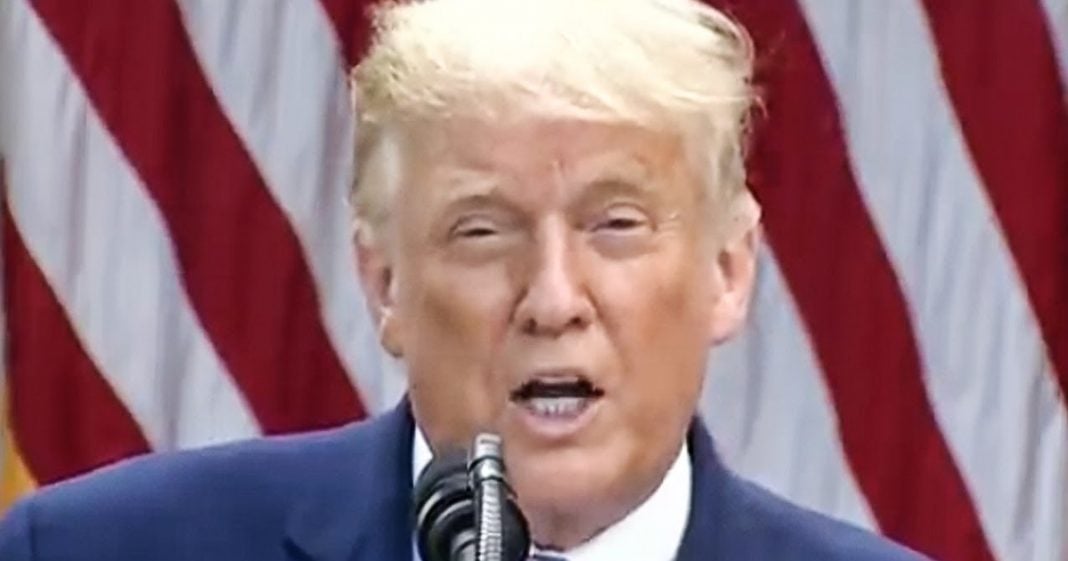 We are watching the number of new daily COVID-19 cases continue to climb here in the United States, and that isn’t going to bode well for the incumbent administration in November. That is why Trump is planning on spending $300 million before election day to convince Americans that things aren’t all that bad. All they have to do is look outside to see how bad it really is, and it got this way because we have absolutely no leadership in Washington, D.C. Ring of Fire’s Farron Cousins discusses this.

The coronavirus pandemic has not gone away. I know everybody wants to take, it’s gone away. It hasn’t gone away. Look at the numbers. We’re in the second wave. Now the second wave, which is by the way, according to experts, supposed to be worse than the first we’re in it now. And the numbers are going up. It’s getting worse. States are still lifting restrictions. My state here in Florida, we’re, we’re done with restrictions. We don’t have any numbers are going up and I’m not smoking because that’s funny the numbers growing up. I I’m just, I’m absolutely shocked that more people are not shocked. So what is the Trump administration doing? They are actually doing something they have announced by. They didn’t really announce. It was uncovered that they are engaging in a $300 million effort to combat COVID-19 despair.

They’re not actually fighting the disease. They’re, they’re fighting the, you know, annoyance that everybody has with the disease. Essentially. They’re trying to whitewash the whole thing. Don’t be sad. Don’t be sad that there’s, there’s, there’s a pandemic. Things are okay. Actually, you can go out. You can be fine. We’re spending $300 million to pay celebrities, not even good ones to go out there and tell everybody that everything is okay. And the goal of this is not to prevent pandemic related depression, which is a very real thing. No, no, no. This is to convince people to go out there and risk it all. Even though the virus is still there. So they’re paying people like actor, Dennis Quaid, musician, Garth Brooks, a TV personality, dr. Oz to star in a health and human services, ad campaign, telling people that it’s okay to go out and about $300 million. So instead of by the way, uh, you know, sending money out to people, who’ve lost their jobs, uh, giving more money to people on unemployment, uh, trying to help struggling small businesses. We’re not spending any more money on that crap. We’re going to give money to celebrities, to tell you to suck it up and go out there and live your life because that’s what we do as Americans now. Like that’s just, that’s what we do. That’s who we are.

America is the Florida of the planet, but that’s who we are. The rest of the country or the rest of the planet looks at America. Like America looks at us down here in Florida. We’re all Florida men in the United States folks, according to the eyes of the rest of the world. Cause we’re just giving up, we’re giving up and we’re having these B list. Celebrities come out and Garth Brooks may be a list. I don’t know, but we’re having these B list celebrities come out and tell us, Hey, it’s okay. I mean, honestly, if you want to help people feel better. Use that $300 million on mental health programs. There are people who are suffering severe depression during this pandemic. I’ve teetered. I’ll be honest. I have, but I have people to talk to about it and I do talk to them about it. And I can only imagine what other people are going through.

People who’ve lost a job. People have lost a loved one. I’ve had several family members die during this pandemic. Luckily none of them from COVID just unfortunate circumstances of not being able to get to a doctor because of COVID. Nevertheless, there are better things to spend money on other than telling Americans to, Oh, well, suck it up. Just go back out there and pretend it doesn’t exist. Now. People are still dying. Every day. People are still getting infected every day. This pandemic is once again getting worse and this administration would rather pay hundreds of millions of dollars to tell you to just shut up and deal with it than to actually deal with it themselves.