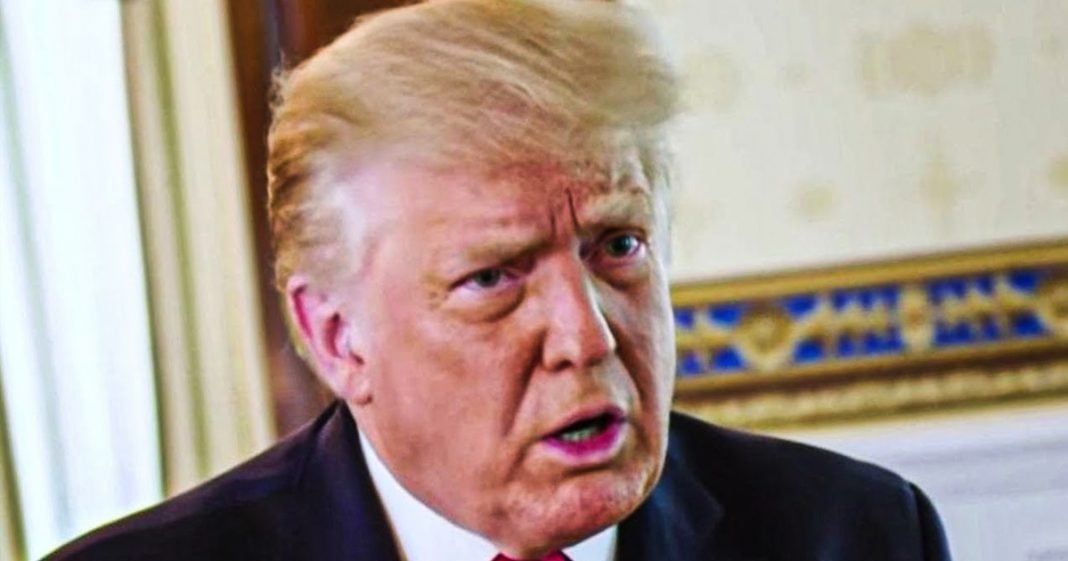 According to documents and interviews with CDC officials, the Trump administration actively pressured the agency to downplay the risks of COVID-19 in children in order to help promote the reopening of schools. This reopening has led to the deaths of teachers, the hospitalization of children, and the second wave of the virus in our country, and Trump knew this was going to happen and actively tried to hide it. Ring of Fire’s Farron Cousins discusses this.

According to a bombshell new report from the New York times this week, the Trump administration actively pressured the centers for disease control and prevention to downplay the COVID-19 risks of kids and teenagers in order to help sell their idea that we have to reopen schools all over the country. This information from the New York times is based on documents that they have received from the CDC that spell this out, as well as interviews with officials at the centers for disease control, where they confirm that this is what happened. You had members of the Trump administration members of the coronavirus task force, including vice president, Mike Pence tell the CDC that they need to chill on releasing the information that they have that shows that yeah, children can get it and children can get sick of it. And teenager or sick from it. And teenagers are twice as likely as smaller kids to catch it and suffer severe consequences from it.

Just, you know, alter it, delete it, hide it, suppress it, whatever you have to do. But obviously what the CDC has, what science is telling us is a hell of a lot different than what Donald Trump was telling the public. Because for months all through the summer, all through the summer, he was telling you schools, you’re going to reopen. They’re going to reopen in August. And of course, especially down here in red States, we started reopening. We reopened in, uh, down here faster than most of the blue States did. Of course, we start our years, uh, school years, little before blue States do, but we are discrepancy. I know it’s just a thing that happens. So nonetheless, our schools reopened and wouldn’t, you know, it massive spikes in new COVID positives, including among adolescents and teenagers, because the president lied to us again because the president tried to suppress the data again, because that is the only thing this man can do.

All he knows how to do is hide. Just like he’s been hiding his tax returns, his college transcripts, his medical records, everything, everything in his life is hide. It. This runs counter to the narrative. I’m trying to sell the American public. So hide it and lie about it and lie about why you’re hiding it. That is what is happening in the country now, except this isn’t something like his tax returns that, that he’s likely hiding to keep himself out of jail. No, this is hiding data. That’s getting our children killed. That’s getting our neighbors and our spouses and our families killed because there have been teachers so far this year, since schools have reopened, starting back in August, teachers have died from COVID. They have, they contracted COVID from the kids. They died. There have been children that have died from COVID that they caught from going back to school. And my governor down here in the state of Florida actually held up a little chart the other day, last week in a press conference. When he said we’re reopening everything, no more restrictions on bars and restaurants, um, said, look, it’s only like a 0.0, zero 3% chance that a kid would die from this.

But what if your kid is that 0.003%. And to be honest, that you’ve lied about all the data. You’ve changed all the data, both in Florida, by the way, and at the federal level, I don’t believe those are the numbers at all. Not at all. We have seen it hit differently here in the United States. We also know based on the available science, it’s already starting to mutate because it’s spreading so much and it’s just mutating. Cause we didn’t stop it. We just let it go. We let it grow. We let it flourish. And now it’s mutating and evolving because it’s found a habitable area. United States, kids can get this thing. Kids can die from this thing. Kids also have preexisting conditions by the way, because of how horrible our healthcare system is here in the United States. Some of these kids may not even know they have preexisting conditions. Some of these kids may not be able to afford the medication for their preexisting conditions, asthma medication. The cost of it for children has gone absolutely astronomical. I know because I have to buy it for two of my kids. These people are psychotic. They are sacrificing our children in the name of an economy that doesn’t even work for the people whose children they’re sacrificing in the first place.