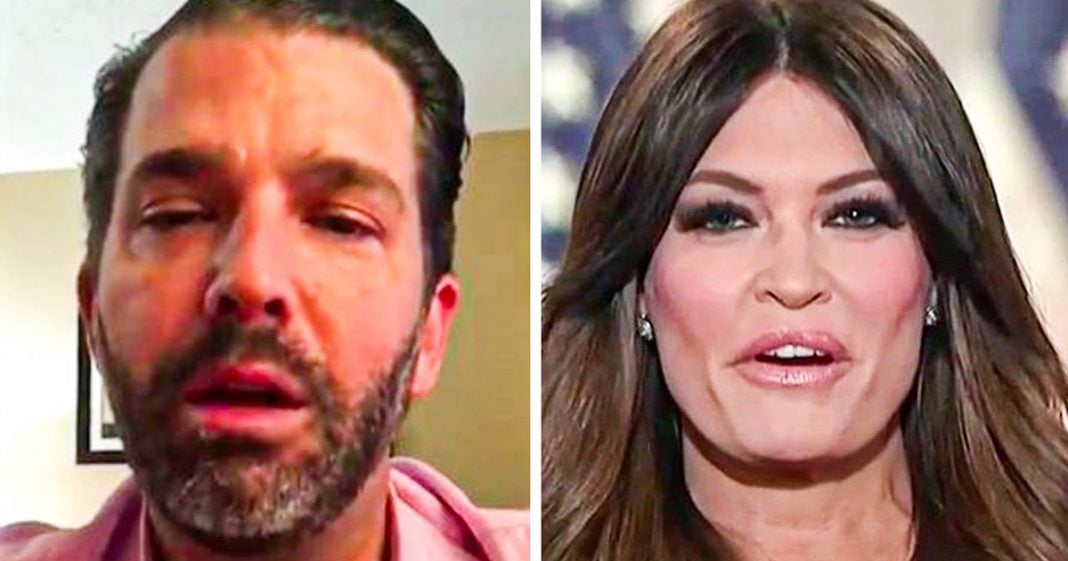 According to a bombshell new report this week, the reason that Kimberly Guilfoyle was let go from Fox News was because she was a lewd and vile person to her staff. The report says that Guilfoyle made a staffer massage her bare thighs and that would talk nonstop about her sexual exploits which made her entire staff very uncomfortable. Ring of Fire’s Farron Cousins discusses this.

When Donald Trump jr. began dating then Fox host, Kimberly Guilfoyle. Most of us assume that shortly after that, when she left her job at Fox news, it was because she was in fact, uh, sleeping with the son of the president of the United States, which obviously presents quite a big conflict of interest. If your job is to go on TV and talk about the news, including the president, can’t really do it objectively way, you know, under the circumstances. But as it turns out, according to a new report by the new Yorker, by Jane Mayer for the new Yorker, had nothing to do with her dating the president’s son. That’s not why she left the network at all. She left the network, uh, because she was facing some pretty serious accusations of sexual harassment and misconduct by female employee. The female employee who was her assistant, this employee was actually the assistant of both Kimberly Guilfoyle and Eric Bolling, who also, uh, was forced out of the network, uh, due to sexual harassment complaints.

So here is from Jane Mayer’s reporting and she actually received a draft copy of the complaint against Guilfoyle. Here is what mayor wrote about what happened with this employee. The woman was hired in 2015, just out of college to work as an assistant for Guilfoyle and another former Fox host Eric Bolling, according to a dozen well-informed sources, familiar with her complaints, the assistant alleged that Guilfoyle her direct supervisor subjected her frequently to degrading abusive and sexually inappropriate behavior among other things. She said that she was frequently required to work at Guilfoyle’s New York apartment while the Fox host displayed herself naked and was shown photographs of the genitalia of men with whom Guilfoyle had had sexual relations.

There’s more. And I’m going to get to that in a second, but I’m also just kind of wondering at this point, um, not only is that obviously sexual harassment, but does Guilfoyle just have like a Dick encyclopedia of every man she’s ever slept with or something. Is that, is that what that is like? Oh, this one, I, that, that that’s disgusting. What’s the purpose of it. Other than to show people to creep them out. That’s that’s, that’s not normal. That’s weird. That’s very weird. Anyway, continues the draft complaint also alleged that Guilfoyle spoken separately and luridly about her sex life. And on one occasion demanded a massage of her bare thighs. Other times she said, Guilfoyle told her to submit to a Fox employees, demands for sexual favors, encouraged her to sleep with wealthy and powerful men. Gee, I wonder where gear foil would get that idea, asked her to critique her body demanded that she share a room with her on business trips were required her to sleep over at her apartment and exposed herself to her, making her feel deeply uncomfortable.

This is the woman who is dating the son of the president of the United States. And this is the complaint against her from this person who had worked for her at the time. This is disgusting behavior by Guilfoyle. I mean, this is absolutely inexcusable. You don’t subject another human being to that. If that’s how you are as a person. And that’s how you are behind closed doors, talking to your friends, you know, showing them your book of pictures and they’re okay with it. And they like it and they embrace it. And they like you for it, find whatever do it behind closed doors with consenting people, but subjecting your employee to this who knows that if they speak out, they’re going to be punished for it. That’s harassment. And it took Fox a couple of years to finally give Guilfoyle the acts for her disgusting behavior. As I have said, far too many times at this point, Fox news has created a culture of sexual harassment and misconduct that has been going on for decades. Up to this point, it appeared to just be limited to the men. You know, all the men working at Fox were pigs. Well, apparently there’s a couple of a female swine in that pig pen as well. And Kimberly Guilfoyle based on this complaint was clearly one of them.