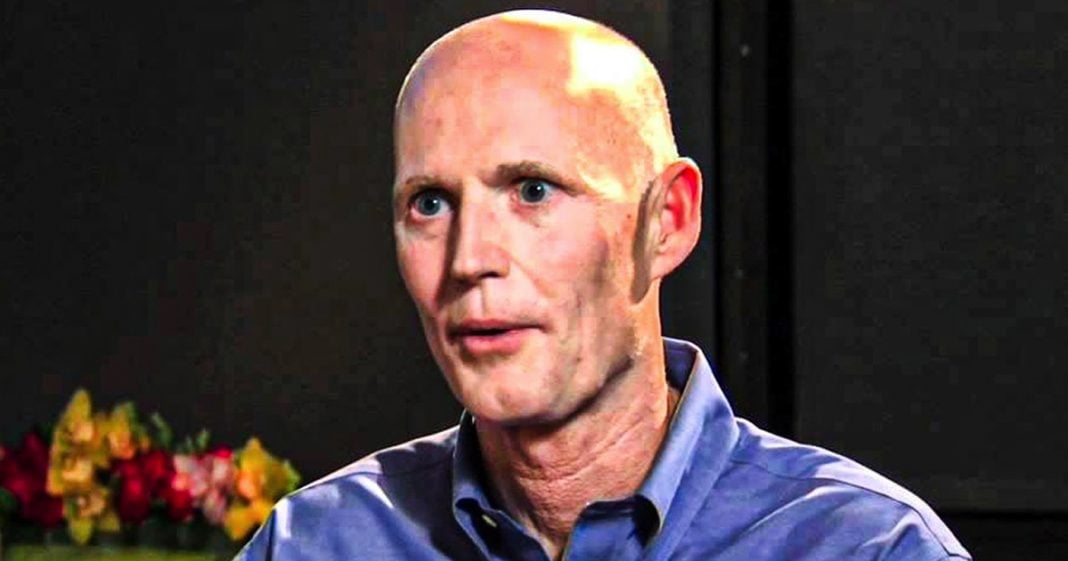 Republican Florida Senator Rick Scott has a plan to help Donald Trump steal the Presidential Election, and he has put his plan into a piece of legislation. This legislation would prevent the counting of ballots beyond election day, a move that would eliminate countless absentee and vote-by-mail ballots that are still waiting to be counted. Ring of Fire’s Farron Cousins discusses this.

Yeah, I gotta be honest with you. I really thought that, um, Republicans would be a little more hesitant to go along with Donald Trump’s plans to, uh, basically just absolutely destroy our democratic society. I truly, and this is, you know, probably just me being naive really thought they’d put up a little bit more resistance rather than just being like, yeah, screw it. Destroy the country, destroy the constitution. I should have known better. Um, recently, uh, my Senator from Florida here, it always happens to be from Florida. Uh, Rick Scott, our former governor introduced a piece of legislation that would essentially give Donald Trump the tools necessary to steal the 2020 presidential election. Here’s what this piece of legislation that Rick Scott has proposed would do is this according to slate, uh, would require that Malin ballots be counted within 24 hours of when voting closes on election day.

Rick Scott’s proposed legislation would also prevent mail in ballots received prior to election day from being processed and counted until the morning of November 3rd, contradicting state election statutes across the country, including one that he signed when he was governor of Florida, basically the bill would move back the date by which votes can start to be counted and move up the date by which the count must end. This would limit the count to a single less than 48 hour window shortening the count in some cases by weeks, um, as anybody who’s followed electoral politics in the United States for any amount of time understands, uh, typically these mail in ballots, absentee voting. Sometimes those can still be being counted up to December. Um, that’s extreme cases, but usually, yeah, it’s like a week or two beyond the election. We’re still accountants and ballots still get a man.

And according to Rick Scott’s legislation, which as they mentioned contradicts what he signed into law as Florida governor here, Nope, you cannot count them early. Just leave your ballots and stack you. Don’t get to look at them yet. Don’t open them to it’s election day. Then you open and you just start counting and you better count fast because now you only have 24 hours after the voting stops on that Tuesday. So 7:00 PM on Wednesday, if you haven’t counted them, Oh, they’re garbage. Get rid of them. Now here’s the thing. This piece of legislation would also have to be passed by the house of representatives. The chances of that happening are zero. So we don’t have a whole lot to worry about with this. But again, what is shocking to me is the fact that these Republicans are just so willing to be like, yeah, screw democracy. We don’t care. Rip up the constitution. We’re totally okay with that. You would think they would at least either stay silent or maybe be like, well, I don’t know. I could support that. Oh, but instead they’re just, they’re cheering it on.

And it, it makes her like how crazy they are. Makes me feel like I’m the one going crazy because I’m, I’m, I’m mad about this. And I almost feel like seeing other people not be mad about it. And am I the one going insane? Like, is there something wrong with me? Do do, do I need to get checked out here because people should be pissed off about this. I know it’s not just me, but the fact of the matter remains Republicans are okay with destroying the actual country, both figuratively and literally by the way, with what they’re doing to the environment, destroying it. So they’re destroying what the country stands for. They’re destroying what we stand on in the country. They’re literally destroying it all. And aside from a few lone voices who are out there saying, Oh, I don’t know if we should do this. The whole Republican party seems to be cheering on the destruction of America.