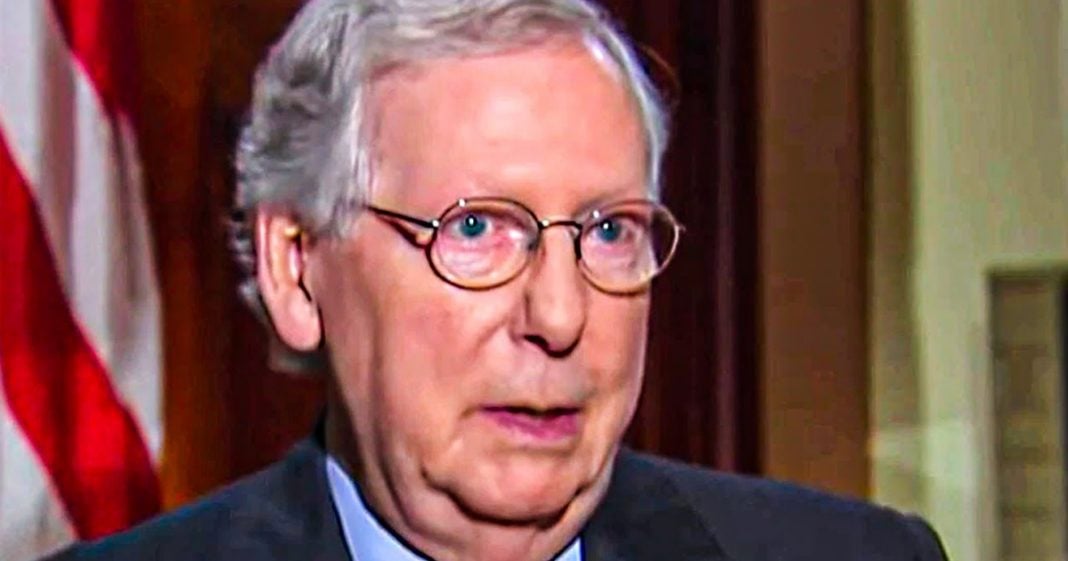 Senate Majority Leader Mitch McConnell is apparently not a fan of pandering, and he believes that passing a new COVID relief bill would be little more than pandering to the American public. The truth is that 60% of American households are struggling to keep their heads above water right now due to the pandemic and economic collapse, and a relief bill could go a long way towards keeping them from ruin. Ring of Fire’s Farron Cousins explains what’s happening.

The house of representatives has sent another COVID relief package over to the Senate where this week on Wednesday, Mitch McConnell said, ain’t going to happen because we’re not gonna fall for your political stunt. He called it a political stunt, a political stunt by the Democrats to pass another $2 trillion package to provide relief for American families, struggling during the pandemic, a pandemic, which by the way, because we’re in the second wave is getting much worse, even though everything’s reopening. For some reason, things are getting worse. Oh wait, maybe the two are related and Mitch McConnell single-handedly for the umpteenth time said no. So nobody, nobody gets anything. Nobody in this country gets a God damn thing. And it’s 100% because of Mitch McConnell. Now, if all of us were registered as corporations, we would all be getting millions and millions of dollars from Mitch McConnell. Because when you give a trillion dollars to a corporation like Mitch, McConnell’s done during this pandemic, that’s just good business.

When you give it to struggling Americans who can’t afford to pay their rent each month, then it’s a political stunt. Then you’re buying votes, which is exactly by the way, what Trump has done with his bailout of us farmers who are getting billions and billions of dollars because they’re hurt by his trade war. That’s what he’s doing. Giving a a $300 million to American senior citizens. So they can buy prescription drugs with a $200 Medicare gift card. That’s a political stunt, but it’s also a political stunt that helps people. This, the heroes act that the house is trying to get through to the Senate as well. That’s good policy. That’s just trying to make sure that we don’t have a massive wave of evictions, but Mitch McConnell is too pigheaded and selfish to let the bill pass. And I will say it again because I want everybody watching this to understand it, whether you’re on the left or the right Mitch McConnell is single-handedly preventing this from happening.

So if you’re struggling during this pandemic to pay your bills, Mitch McConnell is partially to blame. That’s a fact because he is preventing and has prevented multiple different times. You from getting any further relief from the government, he’s given plenty, by the way, to corporations constantly nonstop, still trying to push through immunity for them. So you can’t Sue them. If you go to work and they know that it’s unsafe for you to do it, but you get sick. Anyway, he wants you to not be able to Sue them for that. The meat packing industry is actually having a horrendous outbreak and they’re being fined literally a couple hundred dollars by the federal government for people dying, Mitch McConnell to end all that Mitch McConnell is absolutely the most disgusting human being in Washington, D C right now. And I understand that as a DC, that does include Donald Trump. Nobody’s more dangerous than Mitch McConnell. Nobody has done more damage to American families than Mitch McConnell. And if you think that, Oh, well, things are reopening and people are going back to work. We don’t need relief. Think about this from common dreams, 61% of families reported having serious financial problems during the public health and economic crisis.

Just over half of white families said they have been facing severe difficulties, affording necessities like mortgages or rent credit card bills, groceries, and medical expenses. While a higher share of people of color reported trouble. Making ends meet 86% of Latino families. And 66% of black families said they’re facing serious economic strife among the millions of American households where at least one person has contracted COVID-19 of which essential workers in the healthcare retail food and other public facing industries are, especially at risk. The effects of the economic crisis are being felt even more acutely, uh, 94% of families in which someone has had the disease reported serious financial problems. But helping them would be a political stunt. Right? Preventing these people from watching their entire lives go down the toilet. That’s a political stunt, but if all of these people were registered corporations, then of course bailing them out, which has to be the smart thing to do. Mitch McConnell might actually be the devil himself. I don’t know because honestly, I don’t even think that Satan would be this much of an asshole.