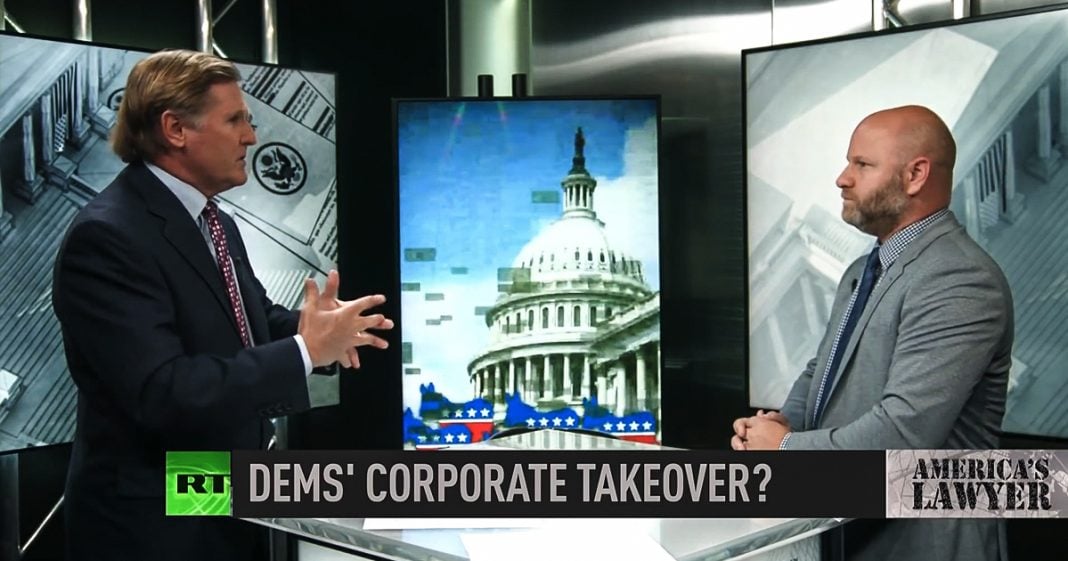 Via America’s Lawyer: The Democratic party has opened their doors to some of the most vile corporatists in the country and that could end up costing them big, big in the future. Mike Papantonio & Farron Cousins to discuss more.

Mike Papantonio:             The Democratic party has opened their doors to some of the most vile corporatists in the country and that could end up costing them big, big in the future. What is going on with this new love affair between the, the chamber of commerce that, oh, by the way, doesn’t represent mom and pop business. The US chamber of commerce represents 18 multinational corporations, conglomerate, biggest corporations in the world. The big energy people, the, you know, the big banking folks, the new technology people, the arms industry. That’s who, that’s who the US chamber of commerce represents. Now this Democrat love affair. You take it from there. I can’t, I can’t make sense of it. It doesn’t sound democrat.

Farron Cousins:                  You know, this, this is just the latest example of, of these, you know, traditional Republican groups worming their way into the democratic party, which was already fairly, you know, conservative compared to where it should be, the democratic party was. And what they’re doing is they’re pushing it further to the right. And I think the reason, and this is, you know, this is my theory on this, is that the people at the chamber of commerce, they know that they’ve got the court system now. You know, they, they got the Supreme Court locked right now. They’ve got 218, I think, as of right now, Trump judges out there, that’s on lock. Now it’s time to rebuy the house of representatives. So they’ve come out, they’ve endorsed 30, 31.

Mike Papantonio:             Oh, absolutely they’d be Republican. So your, your point is that the shift is so significant that we have this merger that, that you believe is taking place between the Republican democratic party going totally in the opposite direction of what we hear the media talking about, is a new progressive era.

Farron Cousins:                  Right. You know, they want to paint AOC and Ilhan Omar as the faces of the democratic party, which me personally I’d love that, but, it’s really not. It’s still Pelosi’s party and Pelosi’s party is still going to the right. They’re embracing the corporations now through the chamber of commerce. They’re embracing, you know, the never Trump Republicans who think they’ve found their new home because the democratic party, as we’ve always said with the courts, with this, with everything, they’re going to be good on the social issues and they’re going to be just as bad as the Republicans on the corporate issues.

Mike Papantonio:             Yeah. On the corporate, what I call dinner table issues, mom and pop family, middle America, they suck.