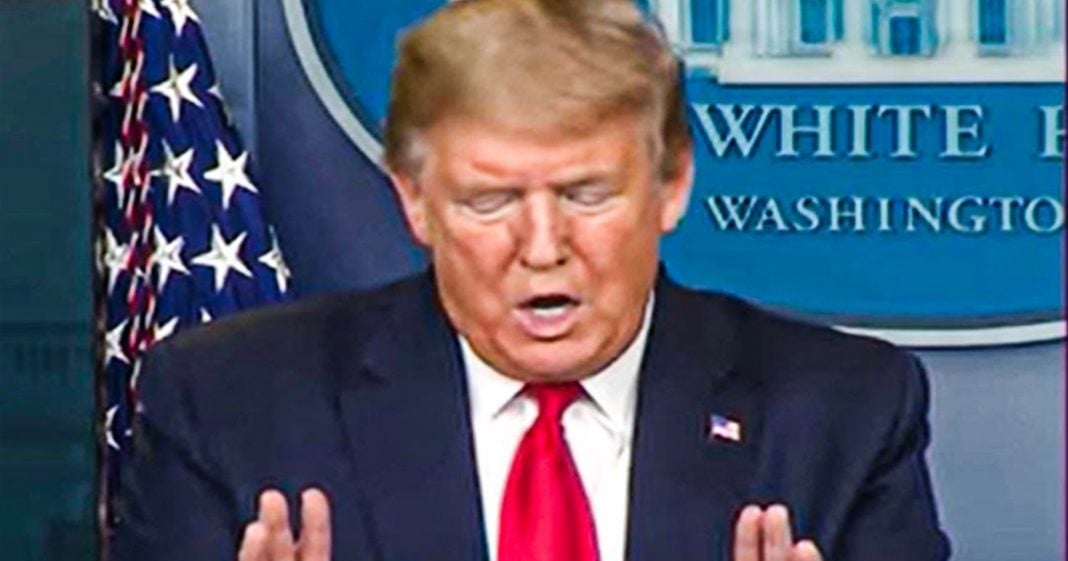 Donald Trump wants everyone to know that he won the first presidential debate, and he won’t shut up about it until people see what he thinks is the truth. He spent a lot of time on Thursday tweeting about how he won and he even tweeted out a Twitter poll where respondents said that he won by a massive margin. The only problem is that none of the other polls out there show this. Ring of Fire’s Farron Cousins discusses this.

Donald Trump is still hung up on the fact that he did not win Tuesday. Night’s debate according to the public. And according to all the analysts, uh, in fact, he did such a poor job. He and Joe Biden both actually did a poor job. They both did such a poor job that now the debate commission has had to come out and say, well, we actually have to change the rules now because you jackasses can’t follow what we had in place, which was a very lax framework. So now we’re going to give the moderators, you know, the ability to cut your mics. If you go over time and so that you can’t interrupt, we’re going to have to treat you like children on a zoom call for their first grade class, which honestly is what they should have done from the very beginning. Nevertheless, Trump insists that he won this debate yesterday.

He tweeted out the following. He said, I won the debate big based on compilation of polls, et cetera. Thank you. And then later on, after people said, no, you didn’t, no, you didn’t. No you did. And he sent out a screenshot of a Twitter poll from CNN. Um, that show 69% of respondents said he wanted only 19% of respondents said Biden one. Uh, I don’t know if you’re familiar with Twitter polls, they frequently get hijacked, uh, by one group or another, trying to skew the results and make it look ridiculous. That’s what happened with this CNN poll. 70% of respondents out of more than 300,000 respondents, 70% of them said Trump won and only 20% said Biden. One, that that is not reflective or anywhere near what literally every other poll shows. And I think we should go with every other poll as opposed to the one skewed C-SPAN Twitter poll.

Because again, um, if you’ve looked at the compilation polling that has been done since the, uh, debate on Tuesday night, about who won the debate, every one of them says Joe Biden won. Except of course the one Trump tweeted out because that was skewed because his supporters hijacked it. So he didn’t win the public. Doesn’t think he won his poll. Numbers are not going to get better from this, but let’s not forget either. He did the same thing in 2016, following the first debate. He tweeted out almost the exact same stuff. You go back four years ago and you see him say the same thing. It’s like, I totally won. The media is lying. I won this year. I won, I won. I won, please. I won, but you didn’t, you did really bad. Like the only thing you have going for you right now in terms of future debates is that they may not happen because you have COVID-19 now and you can’t be around other people.

Like that’s going to work out in your favor, maybe because it gives you an out, by the way, that’s the best thing he could hope for with this. You know, he could easily say, listen, I obviously I can’t debate. They will let me, I’d love to, I’d love to totally would, but you know, y’all are afraid of catching this thing, which it’s nothing to me, by the way. I’m super great. Uh, but yeah, obviously I guess we just can’t have debate. So ho well, you know, it is what it is, cause I’m sick or I have this disease and they don’t want to get sick. I’m fine from it. Like I could actually see it playing out exactly like that. He would act like I have it, but I’m totally great, but they’re too afraid to catch it. So we have to cancel the debates.

They just don’t want to do it. You’re sleepy, Joe, can’t get sick. He’s old, he’s feeble. It’s actually not a bad strategy. But the truth is that if he did that, it’s because he scared the public. Wouldn’t be able to see the fear. Most wouldn’t think it was because he’s afraid, but that would be the reason Trump has nothing to gain from the debates. I think that’s the big thing we need to know. Trump has nothing to gain, but Biden has everything to lose and that, you know, is kind of why you have this dynamic. Trump doesn’t want to do it because he knows it’s not going to benefit him. But part of him does kind of want to do it because you might have the chance to hurt Joe Biden, except that it didn’t happen in the first debate. And that’s why Trump is desperately trying to convince us right now that he did in fact win. It’s his rewrite therapy, you know, an event in the past, didn’t go the way you wanted to. So your brain tries to rewire it, to put a better spin on it, I guess for you. It’s not going to work in this instance. The public knows the debate itself was horrible. Both candidates were obnoxious, but Biden was clearly the winner.