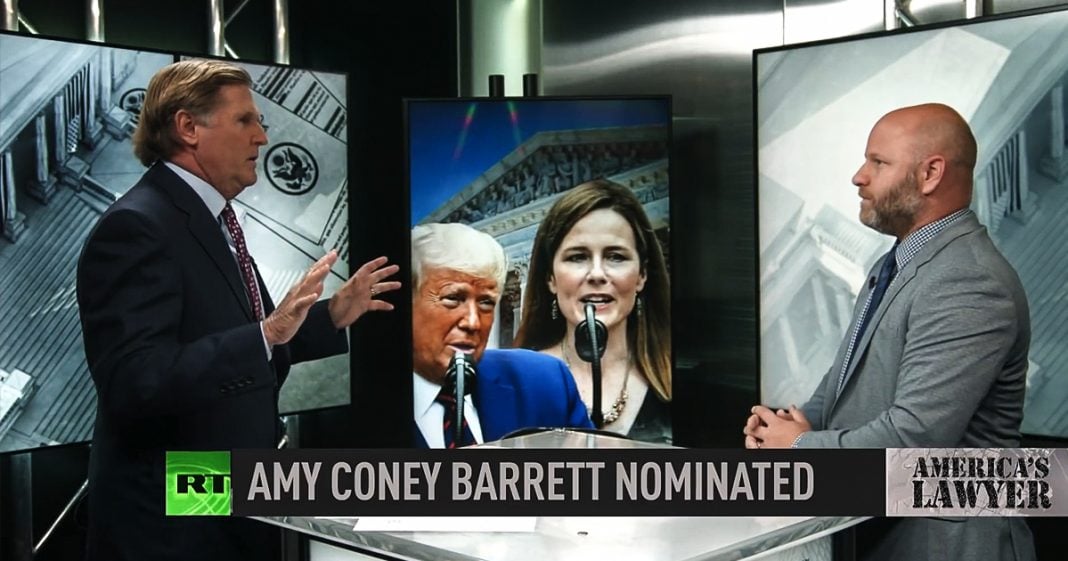 Via America’s Lawyer: President Trump makes good on his pledge to nominate Amy Coney Barrett to the Supreme Court just over a month before the November election. Mike Papantonio & Farron Cousins to discuss more.

Mike Papantonio:             We actually have a nominee to replace justice Ruth Ginsburg and it was the person everyone expected, judge Barrett, she’s was the expectation of this position. The ugly fight though is just beginning in Washington and I have Farron Cousins to talk to me about where he thinks it’s going to go. I’ll start off by saying this, the fights already over. I mean, it, unfortunately it’s already over. And, the, I, to me, the trick is not to do any more damage by creating a fight that you’re going to lose. What is your take?

Farron Cousins:                  Right. I agree a hundred percent. What needs to happen right now because the Democrats know they cannot stop her nomination, she is going to be the next Supreme Court justice. And at 48, she’ll be there for probably 30 years or more. But what the Democrats need to do is not appeal to the Republicans in the Senate, is appeal to the American people. But the way to do that is not to go after and say, well, she’s a religious extremist. Okay. Well, a lot, a lot of folks are, and they they’re actually okay with that. What you need to do is talk about the fact that do you like drinking clean water? Do you like having clean air to breathe? Do you like being protected at your job? She is a threat to all of that. That is the message and that is a message I have not heard a single Democrat in power talk about.

Mike Papantonio:             How, how many times have you and I had this discussion about federal court appointments. Okay. Whether it’s SCOTUS or federal appeals court, it’s across the board, the Democrats aren’t able to say what the Americans really need to hear. A, she’s not just bad for the environment, she’s horrible for the environment. All of her career has been working for major corporate defense firms that really don’t give a whit about consumers and how the, how the environment affects them. She’s terrible on pharmaceutical cases where a pharmaceutical company creates a product and it kills people. She’s not going to line up on behalf of the consumer. She’s going to line up on the half, the copper, corporation. She’s terrible on issues like what happens when wall street steals money from mom and pop consumers. She’s going to line up with the banks. She’s going to line up with the consumer with the, with the wall streeters and she’s going to ignore the consumers. This is an easy discussion if the Democrats would have it, but give me your, take. Who, who forms the narrative on something like this so quickly? I don’t think it’s politicians. I think it’s the media that jumps out, out forward on a narrative that doesn’t work.

Farron Cousins:                  Well, well, it is a lot of it is the media and I think personally, a lot of it today, not just today today, but in today’s world is the people on Twitter. The random, you know, nobodies on Twitter are the first ones to jump out and say, well, she’s an extreme Catholic. And then all it takes is for a couple people to do that for one of those tweets to go viral, Fox news jumps on it, they put it out there and say, look, this is an attack from the left on this woman’s religion. And then they’ve framed the debate from there. And Democrats who were still busy tying their shoes suddenly look up and realize, oh my God, now we’re so far behind because of the crazy people on Twitter that think they’re helping.

Mike Papantonio:                             Well, it’s not just Twitter though. It’s not just the Twitter kind of social media. It’s the, it’s the, it’s the networks. The networks grab a hold of this whole Catholic thing, the whole fact, the woman is religious. There’s a lot of religious people in the United States. She’s a Christian. There are many Christians in the United States. She has a big family. A lot of women and parents have big families. She’s middle America. There’s a big middle America out there. And it’s just almost as if we, we all, they always choose to go after the things that the East coast and the West coast might find appealing in their attack, the abortion issue, plenty of people are involved or are concerned about Roe V. Wade, let me make a prom, this is a promise to you. Roe V. Wade will not be overturned. It will not be overturned with her or whoever. It’s not going to be overturned. So all of a sudden they’re in this fight. It’s the wrong fight because it’s saying to every American who’s religious, who might be Christian, who might have a big family who, oh, by the way, might be Catholic, who might be a little conservative, that you’re an idiot to put this woman on the Supreme Court. That’s the message, in’t it.

Farron Cousins:                  Right. I, I’ll say, I think you give too much credit to corporate media. I know they are pushing the same narrative, but more people are watching social media than they are with the networks. But look, is her religion troubling? Yeah, because she has said it is my job to use the law to further a kingdom of God. That’s a little scary.

Farron Cousins:                  If you lose your pension, because wall street gambled it, she could take away your right to get it back. That’s what, that’s the message they’re not telling.

Mike Papantonio:             And, you know, Tom Frank has a great new book out. What he does is he talks about the idiot, the, the idiots who create these narratives on the left that say to the rest of America, middle America, you’re idiots. You’re foolish. You, you know, you don’t have enough sense to make a good decision. That’s basically the narrative that they use again and again, they pick the wrong narratives. This woman’s going to be, she’s going to be, she’s going to get the appointment.