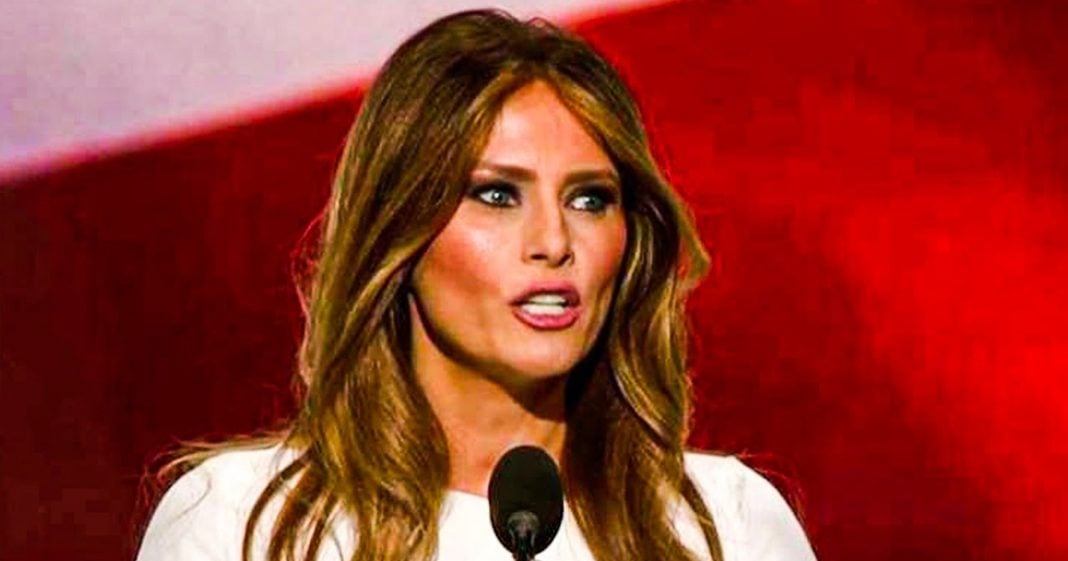 The country was reminded yesterday that Melania Trump is just as vile and nasty as the rest of the Trump family. CNN aired audio recordings of Melania that were recorded by her friend where Melania can be heard complaining about the fact that she had to do the Christmas decorations for the White House, and then she went into a profane tirade when speaking about the children locked up along our southern border. Ring of Fire’s Farron Cousins explains what’s happening.

Yesterday, CNN aired several tapes of a first lady, Melania Trump that were recorded by her a former friend, I guess you should probably call her at this point. Stephanie walk-off uh, Stephanie walk-off obviously, um, does I believe have a new book. Um, and she had mentioned in the past, and we had discussed in the past the fact that she had audio tapes of all of the things that she claims Melania had said, well, she released them and they’re pretty much just as horrible as ms. Walk-off had made it sound. In fact, one of the tapes Milania goes from complaining about having to decorate for Christmas because she doesn’t care about it to immediately saying who gives an F with regard to the kids in cages. That is the clip we’re going to play for you right now. Here it is. First lady, Melania Trump, and who she really is as a human being.

That’s who she is. This is who this woman is. And this is what a lot of us have been saying from day one. She does a good job of hiding it, um, because she never really speaks that much. You know, she always has that stone faced expression.

Like that’s it, that’s all she does. Um, and so it’s kind of hard to get a read on her, but this, this is uncut. You know, this is Melania Trump left to her own devices. No cameras there. She doesn’t think anybody at this is who she is behind closed doors, which means this is who she really is. And we should believe it. We should believe that this is who this woman is. So here’s the thing. She actually has a bit of a point about the press, uh, not caring when this was happening under Obama. They didn’t. And it’s because most of us didn’t know, as I have repeatedly said, and I have repeatedly condemned Obama for it. Now that we do know, and we have the evidence of it. If I had known about it back then, you can better believe we would have done segments on it.

We were not afraid. We did not ever hold back and criticizing the Obama administration when they did something wrong. Neither did anybody else in progressive media, by the way, uh, establishment media. Sure. They towed the line. We all did not. And if we had known that this happened, if I had ever seen this in any of the news that I read and consume on a daily basis, we damn sure would’ve talked about it all the time. We would have shown the pictures. Then unfortunately, we didn’t have it, but the truth is it did happen under Obama and it’s happening even more under Donald Trump. The cruelty is the point because he believed it would be a deterrent. Not only is it happening more frequently under Trump, it’s also happening to a greater extent in terms of the horrendous conditions. Now, the conditions were so bad that Obama actually got sued for it back in 2015, but the conditions are even worse now, because I don’t remember hearing about any kind of eugenics programs when Obama was running it. But we clearly have that now, according to whistleblowers. Um, so here’s the thing about that point Republicans. Aren’t going to care because that is the point. Republicans always bring up wool, Obama, dude, you didn’t say anything.

We didn’t know. I’m not an investigative reporter. I don’t go out there and inspect these facilities. If I’d known, I would have talked about it relentlessly until it ended, but that doesn’t excuse it. Either like, Whoa, does it matter if my guy did some horrible cause cause y’alls guy did some horrible twos who to walk. No, it’s bad when Obama did it. It’s horrible when Trump does it too, like, it doesn’t matter. Who’s doing it. What party they’re from. It’s a horrible thing to do to other human beings. And it’s likely an illegal thing to do to other human beings. So his base is going to forgive that. But the Christmas stuff, I don’t know, man, you’ve had Republicans for 20 years saying the liberals have been launching a war on Christmas. And here you have the first lady, a Republican from inside the white house actively saying, who gives a — about Christmas? I don’t know. But to me that sounds like somebody launching a war on Christmas, right? She didn’t even want to decorate. Maybe that’s why the decorations lacked any kind of heart. There’s no personality to it. There was no soul. It looked like a Christmas party in hell.

And that’s where Melania looks like she belongs because that’s about how cheerful she is. She’s his cheerful as Satan himself honestly, has that, has she ever been happy? Like genuinely happy a single day in her life? Cause she looks miserable. So does Trump, by the way, the man never looks genuinely happy. These are two miserable human beings living together. Clearly she despises her own husband. I haven’t seen her interact with Baron enough to know if she actually cares about the kid. We know Trump doesn’t show. I mean, I feel bad for that kid, but either way, she’s in a situation that she hates. So it’s going to make her even more miserable, but it’s a situation that she helped create herself. She is not a victim here. She was a birther. She engaged in that form of racism. You know, she wore that I really don’t care jacket to go visit these kids.

And then at the end of the tape, you heard her bitching about the fact that the media won’t cover. I tried to reunite a child and nobody wanted to cover it. Nobody wanted to cover it. Fox would cover it, but who cares about Fox? Wow, just burn it all down. Right? Melania, this, this is horrendous. But again, the most important takeaway from all of this is that Melania Trump in these audio tapes and that wasn’t the only one that they had, by the way, they had plenty of others that were all just as disgusting. Uh, but Melania showed us who she is and we need to pay attention to that.