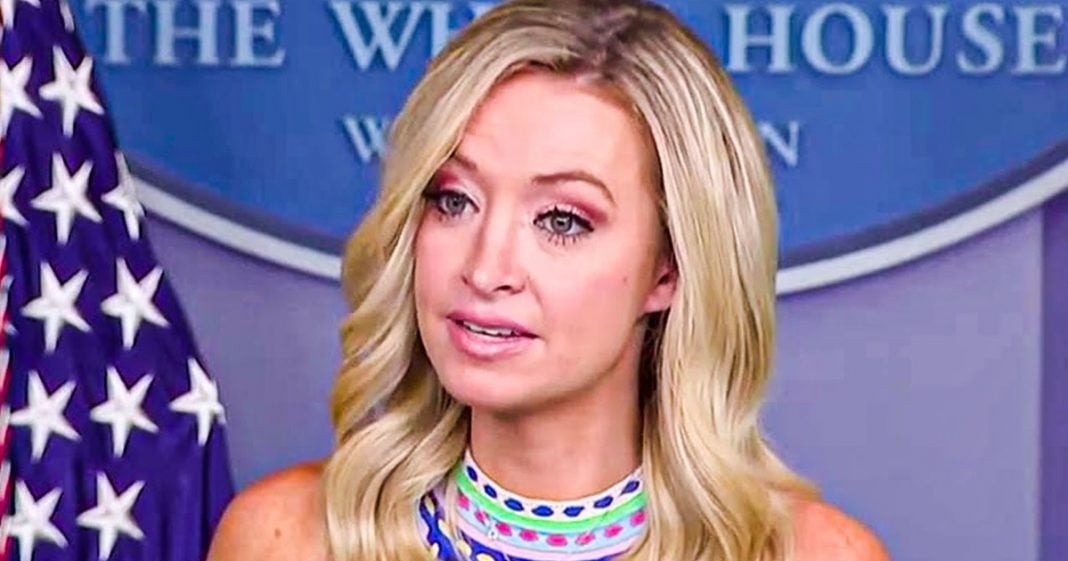 The White House isn’t even trying anymore, and we can tell that by how hard they are trying to convince Americans that Trump does, in fact, condemn white supremacists without actually having the president say those words. On Thursday, White House Press Secretary Kayleigh McEnany brought out a binder filled with quotes from Trump during times when he supposedly condemned racism, but not once did she say that he disavows the Proud Boys. It was a simple task, but she still failed because she had to protect the lie. Ring of Fire’s Farron Cousins explains.

Yesterday, white house, press secretary Kayleigh McEnany took to the podium to once again, try to ease everybody’s fears about whether or not Donald Trump condemns white supremacy. And she brought her a little binder that was, I guess, filled with quotes from Donald Trump all the times over the years where he is condemned white supremacy. And it didn’t go very well. Nobody bought her little charade here and I think it’s because she didn’t do a very good job selling it in my opinion. I think Kayleigh, even though she hasn’t been on the job for all that long, she’s just given up. Like she’s not even trying anymore. Here’s a clip. Here is what happened at the white house press briefing.

Kayleigh McEnany:         This has been answered yesterday by the president himself, the day before by the president himself on the debate stage, the president was asked this, he said, sure, three times. Yesterday he was point blank, blank asked, do you denounce white supremacy? And he said, I’ve always denounced any form of that. I can go back and read for you. In August, 2019, and one voice our nation must condemn racism, bigotry and white supremacy. In August of 2017, racism is evil and those who cause violence in its name are criminals and thugs, including the KKK, Neo Nazis, white supremacists and other hate groups. I have an entire list of these quotes that I can go through with you. He has condemned white supremacy more than any president in modern history.

Kayleigh McEnany:         I just did. The president has denounced this repeatedly.

Kayleigh McEnany:         The president was asked this. You’re making, you’re contriving a storyline and a narrative.

Kayleigh McEnany:         He said. I just did. I read you all of the quotes and if you need to see them in writing, I will put them in an email.

Kayleigh McEnany:         I just did. The president has denounced white supremacy, the KKK and hate groups in all forms. He signed a resolution to that effect. Uh, the president just last week, perhaps you all weren’t covering it, but just last week expressed his desire to see the KKK prosecuted as domestic terrorist. This president, uh, had advocated for the death penalty for a white supremacist, the first federal execution in 17 years, his record on this is unmistakable. And it’s shameful that the media refuses to cover it.

When I say that she’s given up, let me explain it based on that clip. Cause again, she came prepared. She had her binder, she had the quotes. She knew what things to point to. She really, really hard, but she tried too hard because she wasn’t trying to tell people what they wanted to hear, which was the president condemns, the proud boys and any white nationalists organization. That’s that’s it. That’s all we want to hear. Like we want to hear those words come out of his mouth the same way he wants to hear the phrase law and order come out of Joe Biden’s mouth. But obviously condemning a horrible faction of human beings is a little more important than just saying law and order. But she couldn’t do that. Like that. That’s the simplicity of it. All you had to do was come out and say, listen, he may not have been crystal clear about it.

I’ll give you that. He wasn’t super clear about it, but I know from discussions I have had with this man, he does not condone it. He does not support it. And he does not want the support of it. He downright, uh, hate some hates white nationalists. Next question, please. Don done. That’s all you had to do. Is it a lie? Sure. But you’re not afraid to lie up there at the podium. So what does it matter? What does it matter if you tell a lie that it actually is what everybody wants to hear at that point and it gets you and your boss out of trouble. Now, look, I’m not condoning lie by any stretch of the imagination, but y’all know what I mean here. All she had to do was spend five seconds and say, listen, if it wasn’t clear to you, let me make it clear.

Now the president can’t stand white supremacists in the story. That would be good enough for everybody. And we could move on from this is it true now, but the reason she can’t do this is because she is now been tasked like everybody else to carry this narrative without pissing off the proud boys. Cause see that’s the problem. Trump doesn’t disavow them. He does want their support. He does like what they do. So they can’t say the easiest little thing because you got to piss off the very people who support you are so desperate to maintain. That’s why Kayleigh had to go out there and say, listen, he said a bad thing about the KKK a few years ago. Is that not good enough? Well, no, it’s not because they’re not talking about the KKK TA is saying the KKK is bad as is a no brainer.

Everybody gets that. You’re talking about the more modern ones, the more sneaky ones with the racism, like the proud boys, but he won’t do that because he wants their support. And Kayleigh can’t do the very simple task task of even just lying and saying he does so she could have done the easy thing, but instead she decided to carry the narrative to further the lie because I honestly don’t even think she cares. At this point. She doesn’t care that our boss is getting pummeled in the polls. She doesn’t care that she’s giving non-answers to people. She doesn’t care that she’s pissing off the press. All that she cares about is that Scott A. Good job. People know her name now and she thinks it’s good and open doors for her in the future. And if you think that, how about you? You can see how successful all of the former white house press secretaries from this administration have been since leaving the job. You may want to leave this one off your resume.