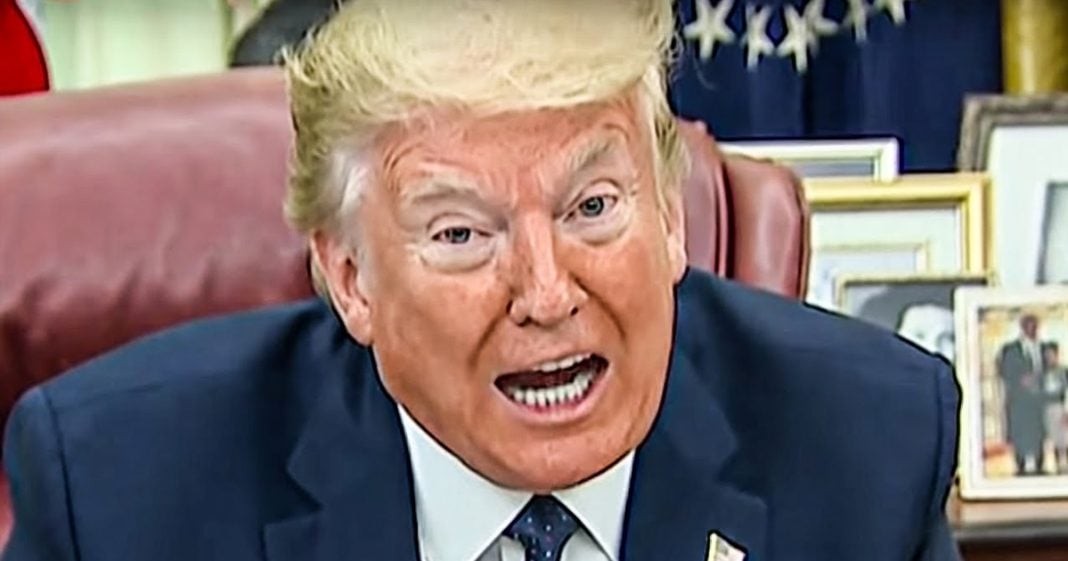 Donald Trump’s Department of Homeland Security is gearing up for massive ICE raids this month in an effort to rile up Trump’s base and convince them that he is tough on immigration. These raids will be taking place in so-called sanctuary cities, which means he’ll use the raids as a lightening rod to show how Democrats are “harboring” illegal immigrants. Ring of Fire’s Farron Cousins explains what’s happening.

Donald Trump is facing a very tough road to reelection. Uh, not only are his talking points, not resonating with the public, but he also has to contend with a pandemic, a slumping economy, all things that happened under his watch, massive civil unrest in certain areas of the country. So yeah, things kind of stacked against him, but there’s another thing that’s also stacked against him. And this is something that his base has not forgotten. And that is immigration. I, I came into office promising to do something, anything about immigration so that you didn’t have to walk around seeing those people from South America and central America in your neighborhoods. You know, it was a very racist dog whistle, uh, sometimes a lot louder than a dog whistle, but that’s what he was, that’s what he was doing. That’s what he was saying. And his base aided up the Ann Coulter portion of the Republican base.

Loved it. And they’ve been, you know, on his butt for quite a while now because he hasn’t done any of the things he promised to do about immigration. Oh, sure. He’s treating them. Uh, you know, basically like they’re in concentration camps down there in the border, but he’s not stopping them from coming over, which is what he promised you. He was going to build a wall. He was going to start deporting people. So now in an effort, you know, with a month to go before the election, he is having Chad Wolf acting director of the department of Homeland security, start more ice rates. So throughout the month of October, what we’re going to see is ice performing countless raids in sanctuary cities. And this is all 100% a campaign tactic. This is not because these people pose any threat. It is not because they’re doing something illegal other than being here, which is a misdemeanor, but he’s doing this and he’s doing it in sanctuary cities so that he can drum up his base and say, look, look at this.

We just went into the sanctuary city. We found 500 illegal immigrants in this Democrat run city. And we’re sending them, I’m sending them back. They were taking your benefits. They were taking your, your healthcare and your social security. Those are things he’ll say it’s not true, but he’ll say them. And that’s a way his last final push to get people to support his reelection. And it’s at the expense of these human beings who are not here committing crimes. They are here trying to just make a better life for themselves. They’re not living off the system. They can’t live off the system. They’re just trying to get by like, yeah, millions and millions of Americans are also trying to do. We’re all just trying to get by. And guess what folks the U S economy, the way it’s designed is kind of dependent upon immigrant later, labor, both illegal and illegal.

It’s not the democratic mayors who should be, you know, have their cities rated because of the illegal immigrants. There it’s the corporate CEOs that should have their shareholder meetings rated because they know some of them, the ones who are using it, they know when they’re using undocumented labor. And if it’s anywhere within the agricultural industry, that happens all the time, you’ve got your multimillion dollar CEOs driving around in their fancy cars, living in their mansion, knowing that they have hired undocumented laborers. And they’re just waiting for ice to come in and rate them in ice. We’ll take all the undocumented people away. The company may get slapped with a paltry fine, but nobody else is going to go to jail. Just the people who were working, not the people who made the decisions, not the people who brought them over here.

They get to go on and on and they’ll just hire more. Cause there’s always a constant stream of them because they keep welcoming them. I want people in this United States, I really do. I’m, I’m fine with them coming over here. I’m fine with him working what I’m not okay with is them being punished for just coming here and working. If you want to punish somebody, punish the person who took advantage of them. That’s the person that needs to be hauled away in handcuffs. Those are the offices that need to be rated, but people who come over here, okay, they may not have come over here legally. We can deal with that, but we don’t have to deal with that by slapping them in an unmarked van, holding them in a detention facility for 30 days, giving them a court hearing that lasts about 10 minutes, then shipping them back off to wa wherever they came from, whatever situation they came from.

Some of them, plenty of them. We have sent back to their day. Yes. Yeah. I’m not in favor of that. If they came here illegally, we can deal with it. We can make it right. That’s not a capital offense. And they can continue working and contributing to the United States, which to be honest is a hell of a lot more than what some of these anti-immigrant people have been doing for this country. This country was built on immigrants. They helped us build it. They help us build it to this day and people like Donald Trump come along, continue to treat them like human garbage, just because he thinks it’s going to gain him a few more political points.